Mold Causes Concern in Hogate Hall from The DePauw Multimedia on Vimeo.

Mold in Hogate Hall has been a topic of conversation among first-years since they moved in to DePauw a couple of weeks ago.

Ever since the flooding earlier this year, several students have been complaining of bad smells and getting sick with more than just the average new school year cold.

The effects of mold exposure are sometimes noticeable and can include nasal stuffiness, skin irritation, fever, shortness of breath and in some cases upper respiratory tract symptoms.

Molds are a type of fungi that grow both indoors and out. While they grow best in warm, damp conditions, molds can exist on many different surfaces.

Angel Riley, a first-year living on the third floor of Hogate, believes to have found mold growing in her room. As a vocal performance major, she is concerned about how sickness could affect her.

“It started about a week after I arrived on campus,” Riley said. “I noticed a funny smell in my room, but I thought it could maybe be my towels. The carpet smelled really bad, like mildew or mold.”

Soon after she located the source, Riley began having earaches. Her stomach would start to hurt after spending too much time in her room.

Immediately, she contacted Facilities Management who was quick to respond to the problem. Later that week, workers arrived to shampoo the carpet. However, Riley says the smell has not gone away.

Kenna McWilliams, another first-year vocal performance major in Hogate, has noticed herself becoming ill. Like Riley, McWilliams has been complaining of a bad earache and other symptoms, which she thinks are mold related. 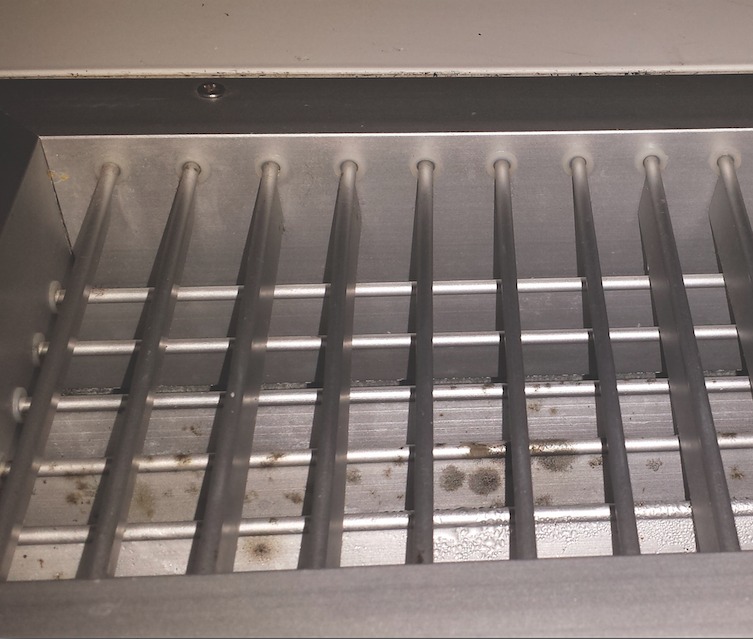 Mold continues to be a problem in Hogate Hall,
a first-year dorm. This mold is from Ines Hayouna's room.
MARISSA HIGGS / THE DEPAUW

While the mold might not be in her carpet, McWilliams still believes it is in her room.

“My best bet would be in the air conditioning vent,” she said.

Ines Hayouna is certain her air conditioning vent has mold growing on it; she can see it. The brown and black spots are scattered throughout most of the visible inside parts of the vent.

Not long after arriving on campus, Hayouna found herself feeling sick. After discovering the mold, she believes she knows why. She said Facilities Management is aware of the mold problem and will be sending someone to clean it for her.

A working member of Facilities Management suggested students be more careful with their windows and air conditioners. He said that leaving the windows open during rainy or warm weather and then turning the air on is the most common source of mold in student dorm rooms.

While mold can typically be taken care of relatively easily, there are times when more work is required to get rid of it. Hayouna will just have her air conditioning vent cleaned and hope that is the solution. Riley however, is considering more options.

“I’m working on moving out into a different dorm that’s less likely to have mold or doesn’t have as many stories of mold,” Riley said.

The Resident Assistant for the third floor of Hogate, Iness Giramata, says that anyone who thinks they might have mold in their room should seek help immediately.

The R.A.s are students’ first stop in fixing dorm-related problems and are equipped with information, like emergency dorm rooms in the Women’s Center, to help students through any process.

“As soon as you think you have mold in your room, contact Facilities Management. That should be your first step,” Giramata said. “The second thing that you should be doing is talking to your R.A.”

“We've had students raise concerns about the potential for mold in several rooms in Hogate,” Dillon said. “Facilities Management is aware of those, is investigating and, if they find mold, will thoroughly clean it up.  If students are concerned they may have mold in their room, they should contact Facilities Management directly.”

Zaheen Rashed - February 25, 2021
0
1. Campus Activities Weekend Update The grand opening of the Beer Garden is this Friday, with the 6-8 p.m. slot open to all students, and...

Share Your Thoughts: Transitioning Back Into Fully Remote Students