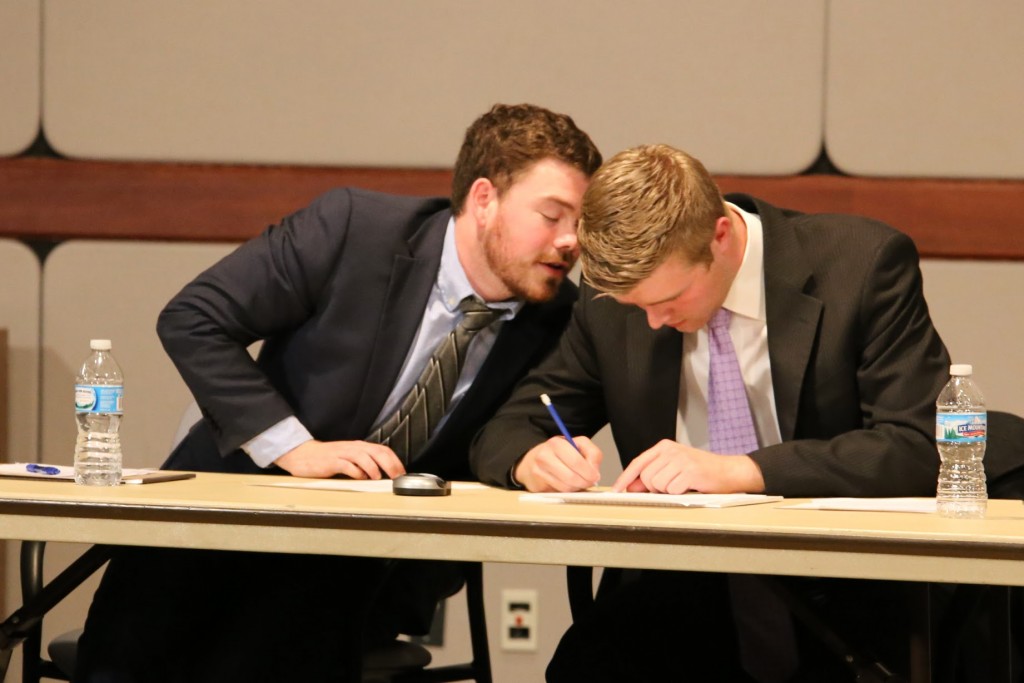 Wabash arrived at DePauw a few days early, but this fight was far from the Blackstock field. The two schools meet in Watson Forum Thursday evening to debate the statement “The best strategy for dealing with objectionable protestors is to engage rather than ignore them.”

Seniors Matt Piggins, and Mickey Terlep represented DePauw, and sophomores Mason Hooper and Jacob Roehm represented Wabash. The debate was well organized in the spirit of friendly competition and constructive dialogue but in the spirit of true rivalry, the evening wouldn’t end without a clear winner.

“They say that Wabash always fights, but it appears that they don’t fight against systems of oppression” said Matt Piggins, during the debate.

DePauw maintained that discussions about campus climate would not be happening if the protesters were not engaged.

“To engage them is to create a space for dialogue, a very much needed dialogue” said Terlep.

Both of DePauw’s debaters defended the response of the student body.

Wabash’s focus was on not giving the protestors a larger platform for spreading their message.

“To engage legitimizes what they have to say” said Jacob Roehm, “It increases their stage.”

Roehm and Hooper defended this view because it was the strategy that the students at Wabash employed in order to get Campus Ministry USA to leave when they visited Wabash earlier this fall.

DePauw responded to this saying that all media coverage of the incident has been focusing on the actions and the responses of the students rather than the messages that Brother Jeb was trying to spread.

“The media attention was not given to the ideas that were destructive” said Piggins.

The discussion developed into one of acknowledging privilege that certain groups on both campuses have.

“As four white men up here in ties it is much easier to walk away, so standing with those who are hurt is important and necessary” said Piggins.

Ultimately DePauw argued that by ignoring protests you ignore privilege. Wabash said that they do not ignore their privilege rather they discuss it within different environments.

“You can be ignorant and blissful but we hope you can hear the bell ringing in favor of DePauw” said Terlep.