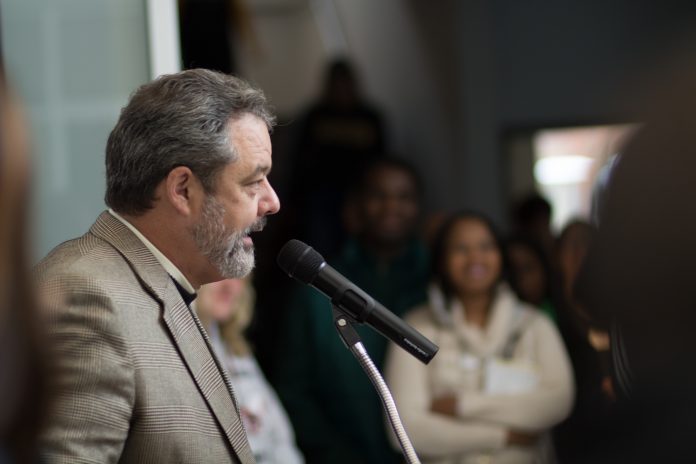 A new DePauw University program guarantees graduates either a job or further education if they have neither six months after graduation.

News of the program, called the Gold Commitment, was released at the start of the spring semester, but the Class of 2022 will be the first to benefit from it. It is an initiative that emphasizes DePauw’s “overall commitment to a liberal arts education and to each student,” Alan Hill, vice president for student academic life, said in an email sent to students on Jan. 31.

The Commitment guarantees students who fully participate in The DePauw Leadership Portfolio - a list of curricular and co-curricular requirements - will graduate with a postgraduate engagement within six months of graduation, or DePauw will provide a first job or an additional free semester of school. By formalizing available opportunities and further engaging DePauw’s alumni network, the Commitment aims to provide students a “distinctive and relevant DePauw liberal arts education,” according to information on DePauw’s website.

As part of the Commitment, returning students will be matched with an adviser to help them through the process. At this point, the university has asked for volunteers among staff and faculty to serve as advisers.

Hill noted in his email to students that the university expects that only 5 percent of graduates will need to take advantage of the program.

The university has released few details about the cost of the program; however, Professor Nahyan Fancy, an associate professor of history, has concerns about the finances of the Commitment. “The president (Mark McCoy) at one point in a faculty meeting even said it could end up costing the University close to $10 million...and if your budget deficit is only about a million, and if you’re trying to ensure that you don’t have deficits, that’s a gamble.”

In a phone interview, President McCoy said the financial plan for the Commitment is still in progress since the first class to take advantage of it will use it in four years.

“We’ve been running through a lot of different scenarios, so we just don’t know yet,” he said. “It’s still in the process.”

The housing plan for students in the program who return to DePauw because of the Commitment is also still in the developmental stages. President McCoy said it is unlikely students will live in student housing, because many of them will be employed and will be able to afford off-campus housing.

He also hopes that grants will help fund the cost of additional counselors.

According to a 2017 survey conducted by Hanover Research, 92 percent of young DePauw alumni are satisfied with the academic preparation and support they received from faculty while at DePauw.

Last Thursday, DePauw faculty and staff met and discussed the results of this Hanover study in a presentation called “Young Alumni and Employer Surveys.” The meeting was the first of the Commitment Conversation meetings intending to “encourage conversation” about the new program, said Anne Harris, vice president for academic affairs. The meetings for faculty and staff will continue throughout the semester.

Faculty comments about the Commitment during Thursday's meeting examined whether students would benefit more from the co-curricular activities of the program if they are required to fulfill them. Some faculty members at the meeting said they are worried students will perceive the Commitment as a checklist rather than an immersive path to success.

Many faculty members agreed that the key to the Commitment’s success is helping students to reflect on their experiences at DePauw so they can become self-starters and learn to think critically about what they are doing and why.

The Commitment webpage claims, “We don’t know of any university of our level or scope that guarantees a first job OR free tuition for a semester.” However, other schools, such as Manchester University, also guarantee students will have a job or be enrolled in a graduate degree program half a year after graduating or the university will provide a year of free schooling. President McCoy believes the Commitment is unique because it focuses on getting students back into the job market, not just bringing them back to DePauw for further education.

Fancy also worries the deeper integration of co-curriculum with curriculum will draw students away from their studies and “further undermine education.” Even now, he notices how activities such as Greek life are fighting for students’ limited time and attention. However, he appreciates the program as a measure to alleviate parents’ concerns about whether a liberal arts education is worth the investment, saying, “I’m all for making changes that I see have positive outcomes.”

After reading the Commitment details on DePauw’s website, first-year Abby Hutson-Comeaux questioned why the webpage says only 5 percent of students need the program. “Shouldn’t DePauw be equipping students with tools to succeed earlier so they don’t need the guarantee? Also, who are the 5 percent?” She added that program sounds like more of an advertisement rather than a strategy for success.

First-year Kyler Schaetzle appreciated how detailed the Commitment goals are, saying, “I think [the Commitment] speaks pretty highly to what DePauw thinks about its students and faculty if they’re willing to do this.” He mentioned it will be especially beneficial to first-years who can be overwhelmed by the amount of opportunities available at DePauw.