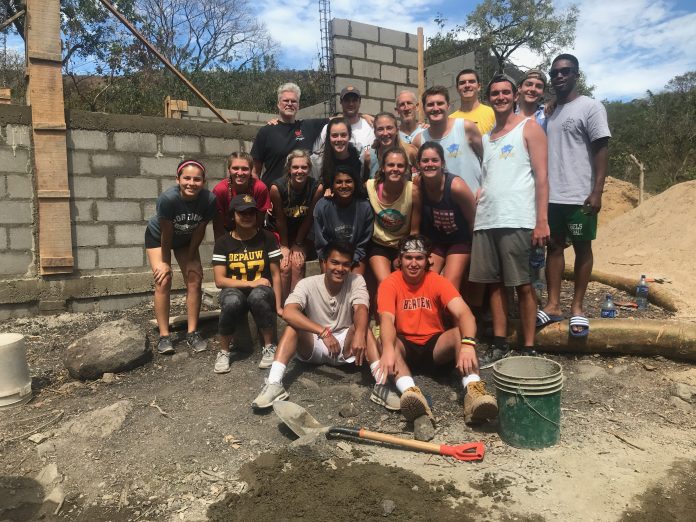 As stray dogs wandered in and out of a Nicaraguan hospital, senior Evan Miller laid exhausted in his new bed. Sick and quarantined, he was stuck in a foreign facility that spoke no English.

“Forty-eight hours with nothing to do but stare at the ceiling and count my IV drops, thinking ‘I don’t know what’s wrong with me’,” Miller said.

Miller was one of a group of ten students to fall ill and be taken to the hospital during DePauw University’s Winter Term in Service: Nicaragua course this past January.

“Out of the 17 of us, I think only two didn’t throw up,” sophomore Cassie Swanson said, who was the first student to get sick.

The two and a half-week course was designed for students to help build a preschool in the village of Aguas Calientes, where people’s homes had initially been used as temporary daycare centers. The course’s destination, though, may change as soon as next year.

After three years in Nicaragua, DePauw is looking to move the program back to El Salvador, according to Assistant Dean of Experiential Learning Mandy Brookins.

DePauw had initially started its service course in El Salvador when the University partnered with Companion Community Development Alternatives (CoCoDa) back in 1993. A non-profit organization, CoCoDa is currently spearheaded by DePauw graduate Ivan Villasboa ’93 who played a big part in the group’s formation.

The service course ultimately moved to Nicaragua in 2016 due to El Salvador’s rising gang violence and political unrest. With the violence diminished, DePauw believes it is time for the program to return to its roots. The health problems in Nicaragua only fueled the decision.

“We feel like, ‘Okay, we’ve tried this, maybe it’s not for us. Let’s go back to where we originally started 20 years ago,” Heather Whitis said, assistant director of short term programs and risk manager.

While the program’s coordinators are optimistic about its future, red flags still remain. What exactly made students so violently sick in Nicaragua? Whitis and the students are still stumped by the question.

Miller said that the local food, a visit to the hot springs, and the lack of a working bathroom all could have played significant roles. “You were always just kind of dirty,” said Miller. “So that’s why you never really knew why you got sick.”

Swanson still viewed the course as a rewarding experience, warts and all.

“You got to see everyone at their rawest form… We all were with each other when we were getting sick,” Swanson said. “We all got to know each other on a really good level.”

While Miller also put the course’s intentions in a positive light, Whitis hated to hear of so many students falling victim to what she had hoped to prevent.

“When the phone rings at 2 a.m., my heart stops for a moment. I hate to get those calls,” Whitis said, who prepared the students with a one-page health-related topics sheet before they departed for Nicaragua. “It’s my job, and I’ve done it for a long time, but it doesn’t get any easier.”

Professor Doug Harms, who has offered to lead next year’s service course in El Salvador, knows the feeling. The computer science professor recalled hearing a story before his time in Greencastle of a DePauw student struck and killed by lighting while abroad.

“I mean, that’s my nightmare. That scares the crap out of me,” Harms said. “There’s just a lot of responsibility doing an off-campus experience.

Despite his worries, Harms is no stranger to service opportunities abroad. He previously led multiple programs in El Salvador and most recently took a Winter Term group to Nicaragua in 2017, during which students got sick for the first time in the Central American country. But wherever his groups go abroad, Harms has an appreciation for students willing to get out of their comfort zones.

“It takes a special kind of student to enroll [in these service courses],” Harms said, who requires students interested in the course to attend an information session or personally meet with him. “Don’t do this if you don’t like beans, or using a latrine for three weeks, or taking bucket baths.”