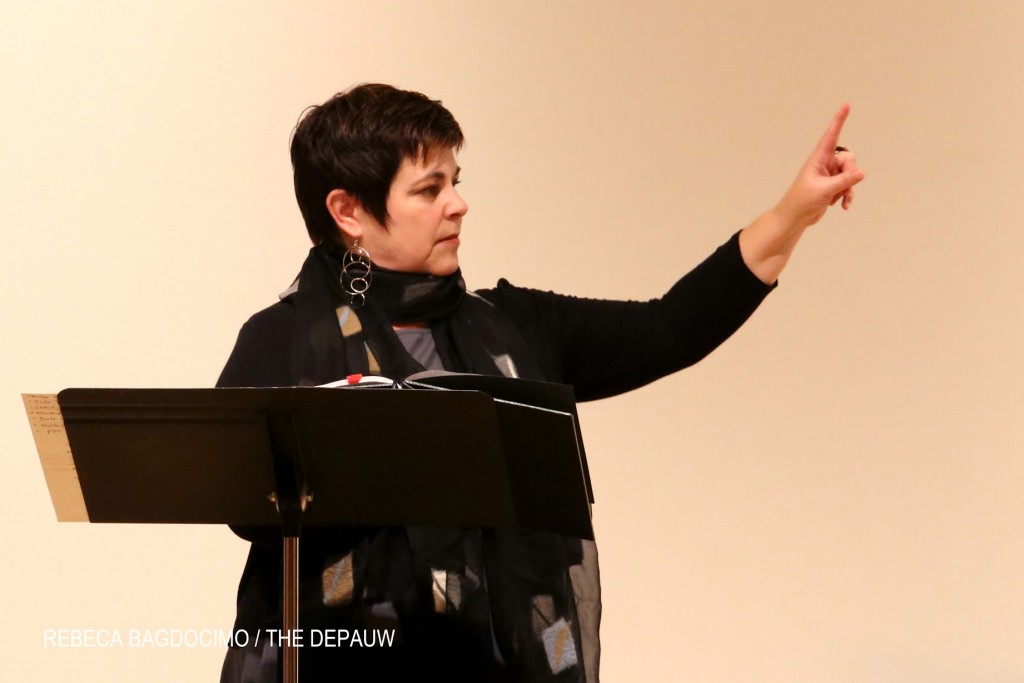 Heather McDonald came to DePauw in late August with her dog, some pictures and a dream. An award-winning writer with eight plays, two screenplays and a libretto under her belt, she wanted to not only encourage DePauw students to explore their inner playwrights, but also to work on her latest theatre project. That play, along with McDonald’s time at DePauw, is drawing to a close as the semester’s end nears. To mark both conclusions, McDonald and members of the DePauw community gathered Wednesday evening for readings of scenes from works of hers, both new and old.

McDonald is this year’s Mary Rogers Field and Marion Field-McKenna Distinguished University Professor of Creative Writing. As the recipient of this fellowship, she has spent the fall semester teaching a class on playwriting and taking in the many sights and sounds of Greencastle. Before beginning her reading, McDonald thanked the students, faculty and others who have been hospitable toward her during her stay, which she said included “many, many dinners at Almost Home.”

She said that she really appreciated being given this fellowship at this point in her life.

“There are plenty of opportunities for young writers, and then other ones when you get much older, but not many for writers in the middle of their lives, and that’s when we lose many writers, so this one has been really good for me,” McDonald said.

The readings began with a monologue from her newest play, “Masterpieces of the Oral and Intangible Heritage of Humanity,” or “Masterpieces” for short. In this play, a war has been going on for the last hundred years, and the art museum where it takes place is now being used as a prison. The character who delivers this monologue is an art restorer responsible for gathering works for the namesake collection, meant to serve as an overarching history of humanity.

As part of this monologue, the restorer calls upon the members of the audience to retrieve the piece of paper and pencil (or crayon, as was the case at Wednesday’s reading) that they were given before the show and suggest items that should be included in this collection. At the end of the reading, a few of these responses were read aloud, and they ranged from the grand works of Leonardo da Vinci to items of personal significance, such as a bracelet from a loved one.

For the other plays, McDonald read as the characters. For the scenes from “Masterpieces,” however, the readings were done by Professors Karin Wimbley and Gigi Jennewein and junior Amanda Straw. Straw spoke highly of the playwright.

“Heather is one of the most creative and inspiring playwrights I've ever had the pleasure of meeting. She's kind, caring, intuitive, and absolutely brilliant,” Straw said.

Art and artists are a common theme in McDonald’s works. The protagonist of another one of her plays she read from, “When Grace Comes In,” is an art restorer. Yet another of her plays, “Dream of a Common Language,” centers on female artists being excluded from the planning of the first Impressionist exhibit, even though their works were going to be included.

This theme extends beyond just the subject matter. DePauw English professor Chris White, who McDonald said tried for two years to get her to come to this campus, described McDonald’s overall style as “artful” and her plays as “like paintings.”

“Her writing, and the commentary on it, read like descriptions of paintings,” White said. “Even her stage directions are reminiscent of fine art.”