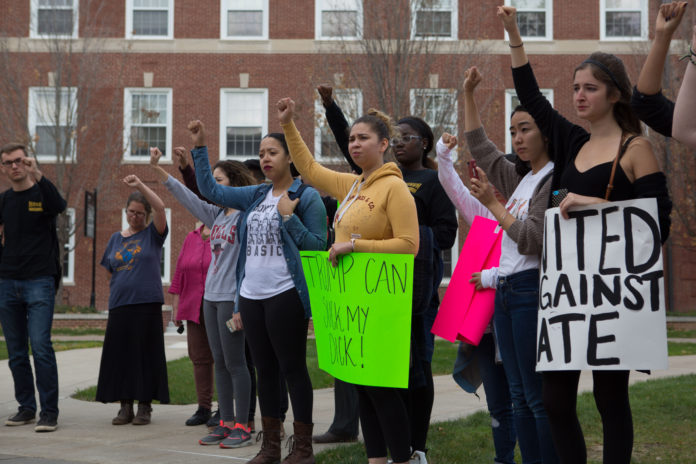 “Say it loud, say it clear, immigrants are welcomed here,” chanted a large group of student activists as they walked across DePauw University’s campus.

Students and faculty started marching at 11 a.m. on Nov. 18 to show DePauw’s administration that they are committed to making DePauw a sanctuary campus.

A sanctuary campus, according to senior Nancy Huynh, has policies in place to prevent Immigration and Customs Enforcement (ICE) or the state and local police from coming on to DePauw’s campus and going to dorms or living facilities to remove undocumented students. In addition, the University would also be obligated to protect students and refuse to release any student’s immigration status.

The march was organized by several different students across campus and information was spread over social media and in-person. Notably, junior Maggie Rocha, and senior Jackie Rueda worked with students to coordinate the walk-out.

The idea for the march came from a scheduled nationwide walk-out across college campuses which was supposed to take place on Nov. 16. “The day of (Nov. 16), DePauw really didn’t do much and it really bothered me,” said Rocha, “I mean we are supposed to be leaders on campus, but where are we when things like this happen.”

The group of students marched into Hoover Hall, Julian, the Emission Admissions building, the Administration building and ended in the Academic Quad in front of Roy O’West Library. They chanted on the way, and worked to encourage other students to join in the march.

Student activists demanded a meeting with President Mark McCoy before Nov. 30 to discuss changes that DePauw can make to its policies so the University can be considered a sanctuary.

“We had goals, our goals are to stand in solidarity with different identities that are hurt and to demand for the administration to vocalize what they are going to do,” Rueda said. “They (The Administration) say all the time that they have plans, but we want to see it.”

While President McCoy was not on campus during the march, he did send a campus-wide email the same day. “I'd like to update the campus of actions the administration is currently taking to be certain that all of our students feel welcome at DePauw and fully supported,” wrote McCoy. “The morning after the election I charged members of the Cabinet to comprehensively examine all we are doing and can do to support all of our students.”

McCoy also noted that the school has to be careful with such a designation like sanctuary campus, as it could affect federal funding or draw unwanted attention to student groups.

In addition, McCoy attached an open letter, which he and other university presidents signed to President-elect Donald Trump for the campus to read.

The march ended around noon, with a continuous call for action from all students present. There was also mention of an online petition started by four professors.

The petition was started on Nov. 13  by Chair of Anthropology and Sociology faculty, Angela Castañeda, Professor of History, Glen Kuecker, Chair of   the Modern Languages Department, Alejandro Puga, and Assistant Professor of Education Studies, Rebecca Alexander.

The document calls for DePauw University to become a “sanctuary campus” in response to an increase in hate crimes across the U.S..

“We believe these recent attacks necessitate the leadership of institutions like ours to defend the rights of vulnerable populations and in particular prevent the anti-immigrant bigotry from becoming a real physical threat to our students and community members,” reads the petition.

As of Tuesday, the petition had over 1,100 signatures from faculty, staff, students and alumni.

“Remember, this is bigger than us, the fact that Trump won means that this country has hate in it and we need to change that,” said first-year Dante Stewart. “The way we can change that is on this campus, if this campus can be an example of change, a predominantly white campus, in Pence’s state, that’s saying a lot.”

Most students who attended the march wanted to show their support for their friends or family who were hurting. “I thought it was the least I could do to help show solidarity with my fellow students, especially coming from a privileged background, just fighting the fight that needs to be fought especially in times like these,” said senior Zach Jacobs.

Other students wanted to be part of the creation of a safe space on DePauw’s campus. “I decided to show my support and just provide a safe space for all the people that are studying here, because feelings of safety are a basic human right,” said senior Yuka Kitajima.

Some students attended to voice their opinions and be part of an inclusive community effort. “I just want to show solidarity to the people who are in danger of being deported soon because of Trump’s new policies that he’s planning to enforce, and to also be around a group of people who I know stand in solidarity with my culture and my people and want to be their for my safety and that of everyone else as well,” said sophomore Elise Daniels.

Over a hundred students, faculty, and staff marched in solidarity. “The numbers (of people) it literally, it touched my soul,” Rocha said. “It was just beautiful to see that, and I’ve never organized anything like this but it was so powerful.”

On Monday, Castañeda, Keucker, Puga and Alexander sent an email out to many community members applauding McCoy’s email but asker for more concrete steps.

“We believe they are sincerely acting with the best interests of our students and school at heart but believe a bolder approach is required at this moment,” reads the email. “Members of our community are already at risk and both our pedagogical and social missions demand that we openly stand up for our students and their families.”

On Tuesday night, President Mark McCoy sent out a campus-wide email addressing the cause of the walk-out. McCoy said that the campus plans to work together to move forward and develop a plan for the future. “I very much appreciate not only the concern and care expressed in this document but also the tone in which it is presented,” said McCoy, “We are united in our efforts to fully support every member of our community and I feel fortunate to be a part of a community that is so expressly concerned with the welfare of every member.”