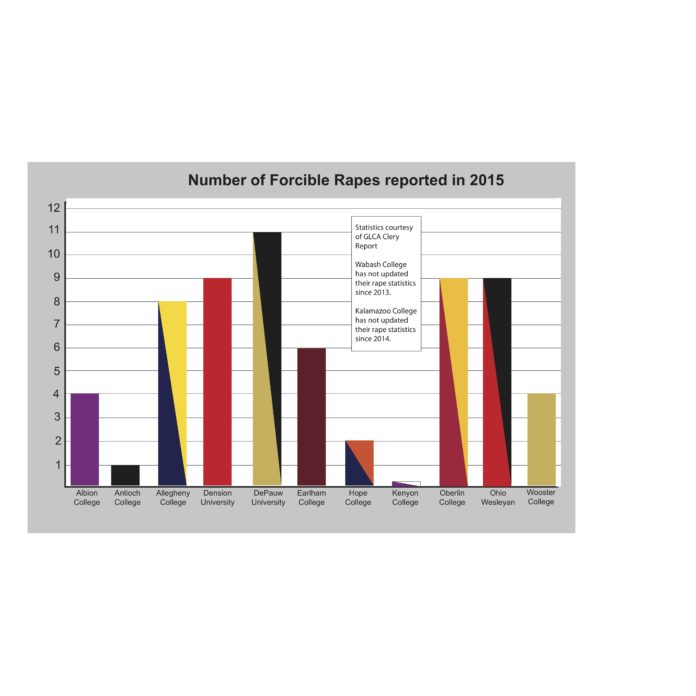 During the first two months of this academic year, there has been one sexual assault reported to Public Safety, according to Angie Nally, DePauw University’s director of Public Safety.

There were 11 reported rapes on DePauw’s campus in the last calendar year. This is an increase from the six reported rapes in 2014. The information comes from the University’s Annual Security Report and Fire Safety Report, or the Clery Report, posted on Oct. 1.

Other information included in the 38 page document was the history of sexual offences and acts of dating violence on DePauw’s campus over the last three calendar years. In 2015 there were six incidents of fondling, compared to one in 2014. Three dating violence offences in 2015 and an incident of domestic violence. However, there were no incidents of stalking in 2015, compared to the four reported in 2013 and the one reported in 2014.

Sophomore Kiara Goodwine had the misfortune of experiencing what she referred to as targeted harassment when living on DePauw’s campus over the summer for an internship, and she does not feel safe.

“It was hard for me to come back,” Goodwine said. While living in campus housing, Goodwine experienced an act that she stated broke the University’s code of conduct and Title IX. The incident involved a male student and Goodwine said she became the victim of violation and harassment, and believes her gender and sexuality served as a key factor.

“I was really scared and unsure of what to do,” Goodwine said. She said she called Public Safety and was asked by the operator on the line why it took her so long to respond. She reports her call was only made 40 minutes after the incident.

“The first thing that was asked was are you sure this isn’t an accident,” Goodwine said. “There was immediately a want to not believe me.”

College women are three times more likely to experience a rape or sexual assault during their four years at a university. It is estimated that out of every 1,000 women attending a college or a university, there will be 35 incidents of sexual assault each academic year, according to research done by the National Institute of Justice in 2000. In the 2015-2016 academic year, there were 1,209 female students enrolled at DePauw.

According to the Rape & Abuse Incest National Network (RAINN), one in every six U.S. women will be the victim of an attempted or completed sexual assault. Additionally, women between the ages of 12-34 are statistically at a higher chanced to become the victim of an act of sexual violence. Male college students are five times more likely to be sexually assaulted than non-college students. One out of every ten rape victims are male.

Denison University and Oberlin College experienced nine reported rapes in 2015. Out of the Great Lakes College Association, DePauw University recorded the highest rate of rape for 2015.

“I don’t ever want us judging our success based on others,” said Renee Madison, DePauw’s Title IX coordinator and senior advisor to the president for diversity and compliance. “We’ve (DePauw) got to hold ourselves to a higher standard respectively.”

When reporting an act of sexual violence, all faculty members are considered “responsible employees” and must report if a student approaches them and states that they have experienced a sexual assault.

This information goes directly to Madison and other Title IX administrators at which point a student can decide whether or not to go through an investigation. Students can also decide to commence an investigation through Public Safety. If the investigations through either of these paths produce enough evidence, the reports are then sent through the University’s administrative judicial process.

If a student is found responsible for an act of sexual violence through this process, the highest degree of punishment the University can provide is expulsion and restriction from entering campus. The process takes around 60 days to be completed. If a student wants the situation handled legally, they can contact Public Safety or the Greencastle Police Department for a criminal investigation.

“Sexual assault is a crime, it’s a disaster for everyone involved, for the families, for the friends, for the perpetrator and the victim,” said President Mark McCoy. “That’s a place that if we can help college students avoid in any way, it’s worth investigating.”

Both Madison and Nally encourage students to report acts of sexual assault to the University. When an assault is reported, there are actions taken to help students who have been affected by sexual trauma, be it through either altering their academic or living situation.

The accused student in the incident involving Goodwine did not receive any punishment from the University. Goodwine is frustrated and disappointed. “I did everything right that I was supposed to do and it still wasn’t right,” she said. “The administration did not support me.”

The safety of women on DePauw’s campus is important to McCoy. “As the father of three daughters this is something that is big on my mind,” he said, but when looking at campus safety, McCoy wants to focus on the safety of DePauw as a whole. “I am very concerned about everyone’s safety on this campus, in every imaginable way.”

McCoy wants concentrate on operational ways the University can improve safety. “There’s things that we can do for each other,” McCoy said. “Increase the dialogue and the awareness of how we work to keep each other safe, and safe from everything.”

One factor McCoy discussed that plays a role in high campus sexual assault is alcohol. “We’re taking young people, in a confined space, adding alcohol and often that then creates the challenge that we face,” McCoy said. “Often these things are related to alcohol.”

Goodwine does not agree. “Personally, I don’t think acts of sexual violence or harassment are caused by substances,” Goodwine said. “The motivation is going to be there regardless of alcohol of drugs.”

-This is the first installment of a three part series-