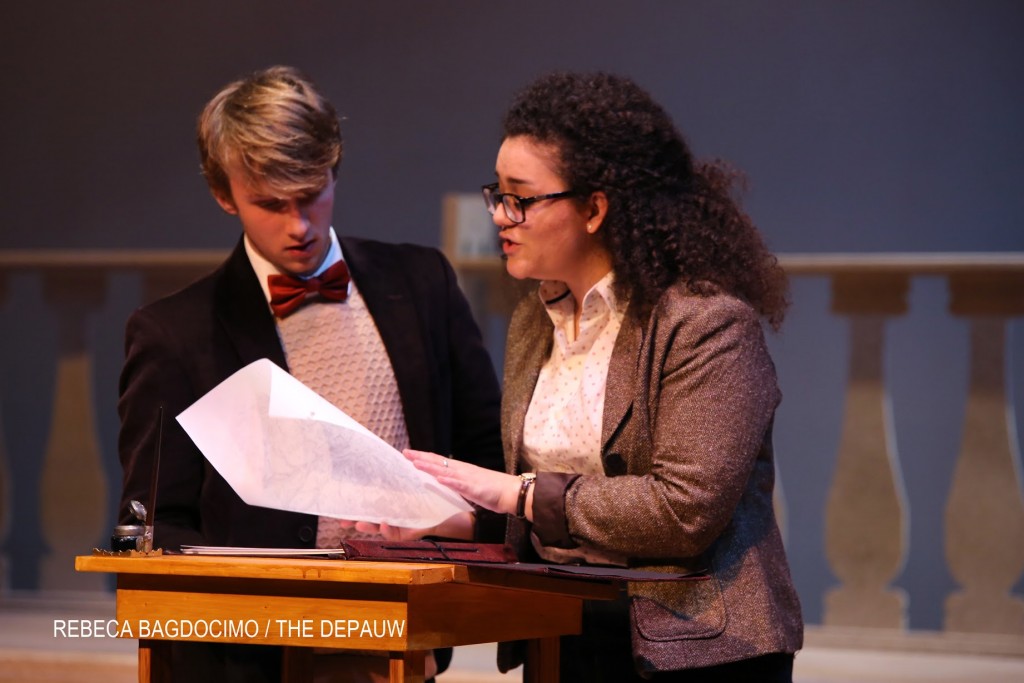 You wouldn’t think that leather skirts and Regency jackets would have a lot in common.

In Tom Stoppard’s “Arcadia,” however, these two are brought together by the historic Coverly house in England, where academic mysteries are unfolding 200 years apart.

While in some scenes the house is populated by its 1809 residents, in others, the more modern descendants are the center of the story. In both worlds, the characters are concerned with the highbrow academic of literature, physics, geometry—but pay just as much attention to their human desires for love and lust.

“There’s nothing this play doesn’t talk about,” said director Amy Hayes. “It’s academic and funny and British in its humor.”

Calling Stoppard a “talky” playwright, Hayes commented upon the difficulty and many layers of this play. Aside from the interweaving of the two time periods, actors and audience members alike must be able to keep up with the quick wit and frequent forays into scientific, mathematical and literary knowledge.

“It’s like solving riddles all night, every night,” Hayes said. “We’ve had three people on the computer every night to look stuff up.” 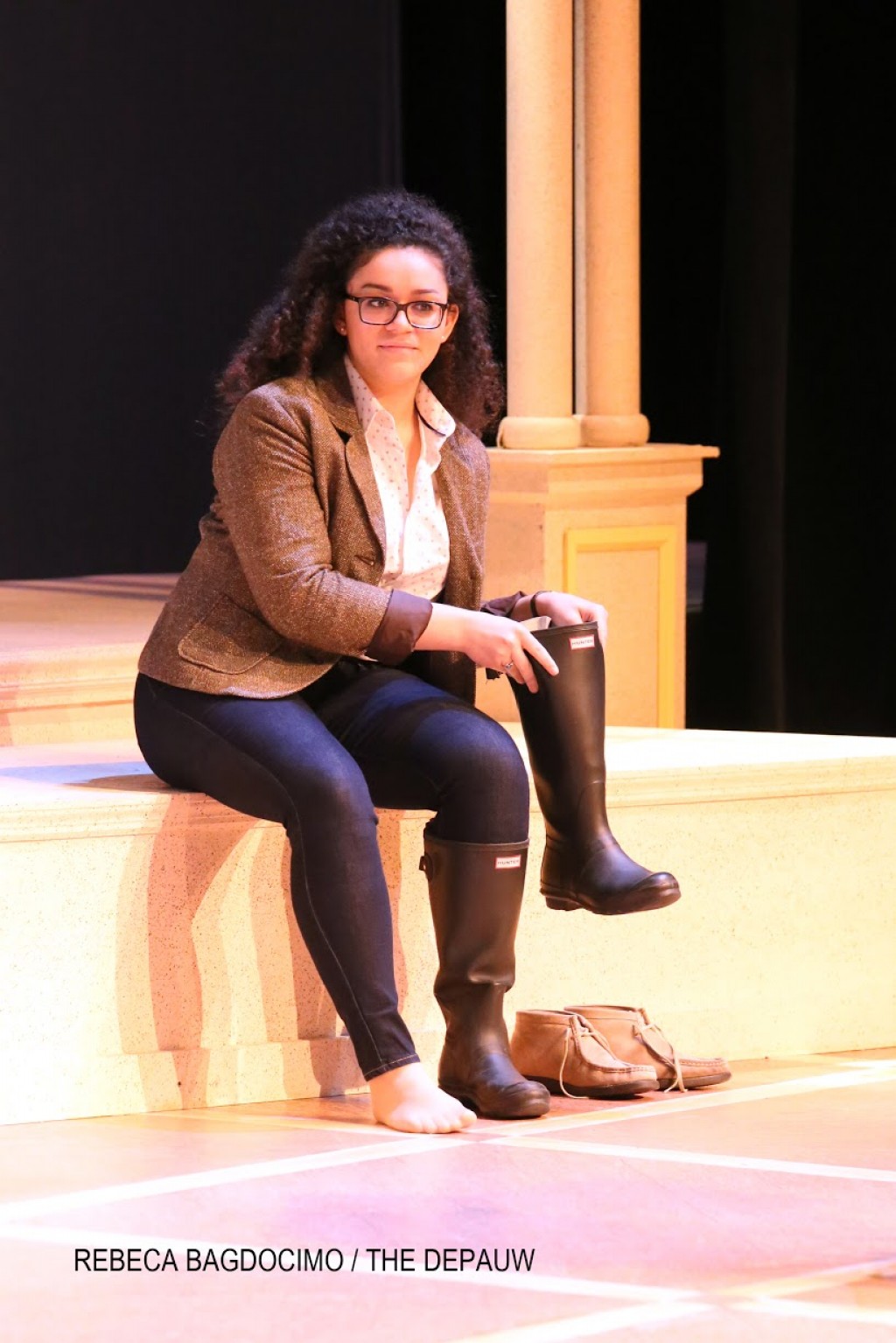 However, for Hayes the sometimes difficult language is more than worth it. She has been waiting for a chance to take on this play ever since she first came upon it in graduate school.

“I used to say, ‘I want to direct this play, and play every character.’”

Though she’s had to settle for just directing, the actors she has full faith in the actors she had worked with, even with such a young group. The entire 12-person cast of “Arcadia” contains only one senior, Laura Loy, who plays Thomasina Coverly.

“We have a lot of freshman so I’ve kind of had to take something of a leadership role and make sure my energy is up and make sure I leave my stuff at the door,” she said.

Loy’s status as the lone senior is made particularly ironic by the fact that her character is the youngest in the play—13-years-old in most scenes, and 16 in the last. Her tutor—a friend of Lord Byron’s as it eventually turns out—is Septimus Hodge, who is played by first-year David Mather.

“Between me and Thomasina there’s a student/teacher relationship, but there’s also an underlying love and joy for her knowledge that he thrives on,” Mather said.

Though only a first-year, this is Mather’s second appearance on a DePauw stage, since he appeared in the production of “Spamalot” earlier in the semester. Rehearsals for “Arcadia” began the day after “Spamalot” closed.

According to Hayes, the quick turnaround didn’t slow the cast down. Within the first few weeks, the actors were working on blocking and staging the play.

“We get a basic idea of ‘okay, the music room is over here, bedroom are this way, the garden gazebo is that way,'” she said. “We start figuring out where things are in the world of the play.”

Later, the cast moved on to really exploring their own characters, and the relationships between the different characters.

“Those can be somewhat tedious rehearsals, but they’re very necessary,” Hayes said. 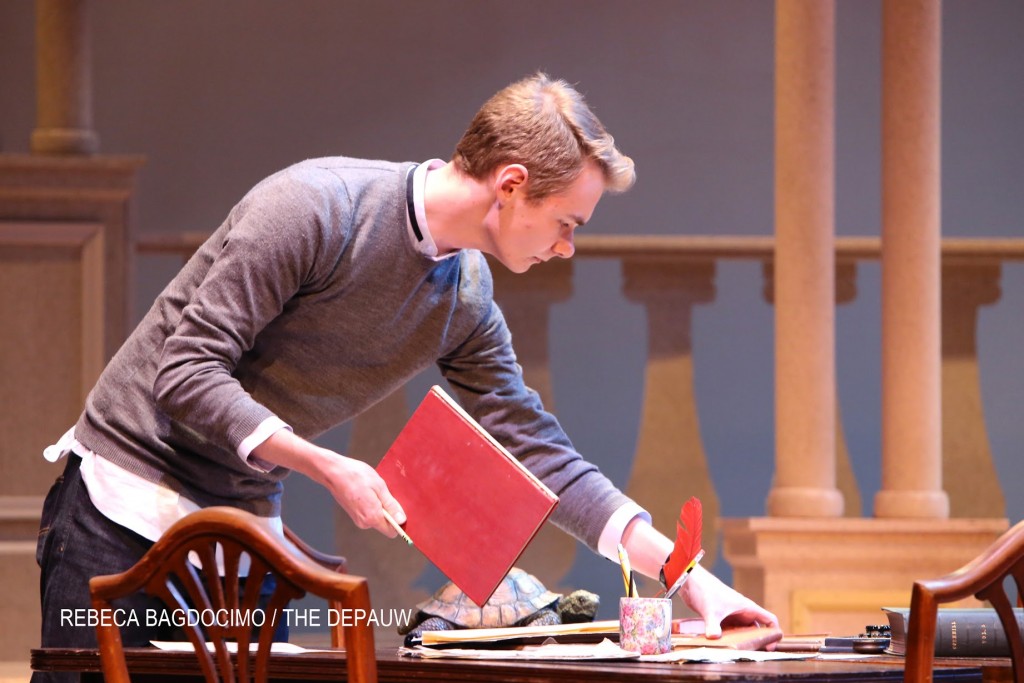 Junior Billy Burke, who is also the play’s costume designer, cited fully understanding his character Valentine Coverly, who is a character in the present day, as both one of the most difficult and rewarding parts of being in this play.

“When you read the script, you can very clearly see that he’s very intelligent, he’s passionate,” Burke said. “But at first read you can just say the lines and be serious all the time. Amy [Hayes] pushed me to find the joy and the humor in Valentine.”

Burke’s personal understanding of the play was also helped by his time as costume designer.

“It was the best of both worlds, because I literally got to design two completely different worlds,” he said. “While I’m designing an empire waist dress and a Regency jacket, I’m also shopping at Zara and H&M for leather skirts.”

Though he didn’t participate in “Spamalot,” knowing that he wanted to be involved in “Arcadia” early on, his time as both an actor and costume designer has kept him busy in this second half of the semester—sometimes from 4 p.m. until after rehearsal he would spend time solely working for something with the play.

But no matter how much time the cast members have spent with the play, Hayes’ connection goes further back.

“When I read the play for the first 15, 20 years I was reading it, I never got to the end without crying,” she said. “Every time I got where the two time periods are coming together and you see the people in 1812 dancing while the people in modern day are discovering something that they discovered 150 years ago, it’s really poignant, and magical, and beautiful and sad.”

And after years spent hoping to perform in or direct this play, Hayes has one big take away:

“The real poets and the real scientists know there’s no difference between the universe expanding, and falling in love.”