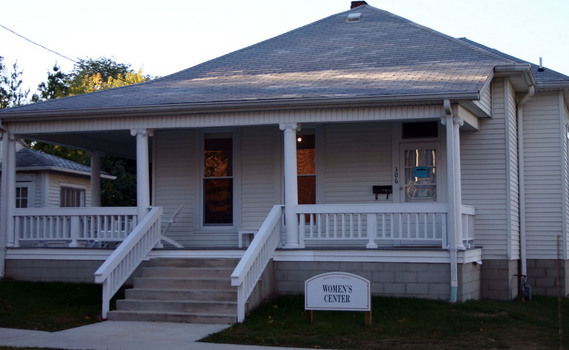 Oxfam hosted a conversation at the Women’s Center on March 9 to celebrate Women’s History Month. This event gave students the opportunity to participate in dialogue concerning gender and race, similar to that of Day of Dialogue.

The group of students who put on this event are members of Oxfam, an international organization that works to right the wrongs of poverty and injustice in the world. Oxfam executive member and junior Angelique Serrano presented and helped organize the event, saying the goal of ending injustice involves multiple things, one of them being women.

Serrano’s presentation recognized  the leadership abilities of current and recently graduated DePauw students. “I think that it's important to recognize women because women have been the backbone of a lot of movements, especially women of color,” Serrano said. “We are acknowledging women-led activism but specifically women of color. The women of color on this campus have done so much on campus.”

Sophomore Nadia Estrada was inspired to speak at the event because of her personal relationships with the women honored during the event.“I took a role in this specifically because a lot of the women showcased in this slide show I know,” Estrada said. “I think it's important for them to be recognized for not only the work but also the love that they put in on campus.”

During the presentation, the advances regarding open conversations among the DePauw community were discussed. These include  Day of Dialogue and power, privilege, and diversity course requirements, which are both results of this movement. “Women of color have brought to light a lot of issues that the University didn't look at,” Estrada said. “We brought conversation to the table.”

The goal of this event was to recognize the effects that students have made on campus and encourage others to get involved. “Recognition is powerful,” Serrona said. “Knowing who to go to is powerful.”

Sophomore Kamil Hester found out about the event through the flyers posted around campus. She attended the event due to her interest in history and DePauw’s past, specifically what led to the current divide between white students and students of color. “We have Day of Dialogue but being able to push that farther in our lives would be great,” Hester said. “The administration doesn't really want to have this conversation and white students are unaware of this side.”

“It's important to specifically highlight women of color because their activism is most easily erased,” Hester said. “A lot of these women are recent graduates and their legacy has already been lost, but we are preserving it.”

While the focus of the event was women, both males and females attended the event. Oxfam executive member and senior Kenneth Cruz Riera sees himself as an ally to women. “I am interested because I have a duty to be,” Cruz Riera said. “I can't just ignore these issues which is why I am still a part of [Oxfam].”

The activists who were celebrated during the event dated back to 2010. “My role as an ally is to be educated and to not contribute any micro aggressions and to provide a safe space for women,” -Cruz Riera said. He also said it is his duty to be interested in women’s issues and that he should be educated on the subject to achieve this role.

Serrano said that it is important to recognize all women and not just certain groups of them, saying, “It's not just a type of women but it's all women that are strong and powerful and deserve recognition for their work.”