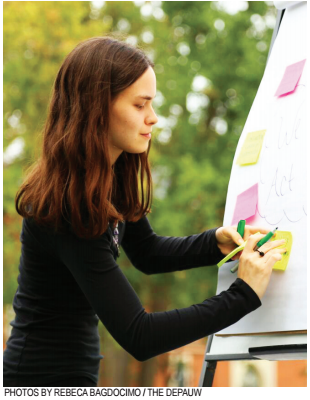 Wednesday, 1:45 p.m.: I arrived for my first stay at the Russell J. Compton Center for Peace and Justice’s Peace Camp after finishing class for the day. I’d passed by the camp countless times on my way to and from classes in Asbury both last year and this year, but had never stopped for longer than to exchange pleasantries with the Compton Center interns and grab a free bookmark or piece of candy, if I stopped at all.

Leftovers from their lunch discussion on youth incarceration, presented in conjunction with Sigma Lambda Gamma, sat out and were offered to everyone who stopped by. As it was a lull between class breaks and no events were going on, the interns gathered under the tents and shared stories about the different events they had put on and were still yet to come.

“We had 7 or 8 participants, which allowed for more intimate conversations,” said junior Gesenia Viviescas, who led that day’s lunch event.

The camp had a happy spirit; everyone worked on their own projects as upbeat music played, friends shared laughs and the decorations, from the rainbow LGBTQ pride flag to the sidewalk chalk drawings, were colorful and promoted the camp’s message of peace and equality.

As 1:40-2:40 classes let out and students headed to their 2:50 classes, most people (like I had so many times before) just kept walking. However, those that did stop came away with a greater understanding for the work that the Compton Center does.

Wednesday, 5:30 p.m.: I rejoined the camp for an event led by senior Amarilis Roman on the politics of hair.

“This is a topic that I’ve wanted to talk about with a group like this for a while,” Roman said as she welcomed the group to her discussion. “Every day, I make a decision about how I want to portray myself to the world with how I do my hair.”

After each member of the small crowd assembled went around the circle and introduced themselves with their name and favorite hairstyle and a brief introduction about why the discussion of hair politics is important, we broke into small groups.

These groups discussed different items Roman brought that related to the topic. One was an article criticizing another article that was a tutorial for creating an Afro from straight hair, another was a screenshot of a Google search for “beautiful hair” that depicted only white women with fine-textured hair and another was the lyrics to the India Arie song “I Am Not My Hair.” The groups had similar yet unique conversations about the politics of hair.

Those items provoked some very spirited conversations. Some of the topics that came up were what constitutes a professional hair style and how that varies by race and gender and why it is problematic for white people to wear their hair in a style like Afros or dreadlocks that have cultural/historical significance for communities of color.

Not all in attendance agreed on every point, but everyone came to the same conclusion: hair is a complex topic and the politics surrounding it should be more closely examined in everyday society.

Thursday, 8:45 a.m.: I checked in with the people who stayed at the camp overnight. Yes, the camping tents set up in Academic Quad are not just for show; people actually sleep there each night throughout the week of Peace Camp.

As most would assume, the experience of sleeping in a tent is not the same as in a dorm, house or apartment. Senior Madison Hartman said that she was finally able to get to sleep around 1:30 a.m. and woke up a little before 8 a.m.; lights from the library and noise from the Hoover Hall construction held her back from sleeping more than that.

She explained that the interns don’t just camp out in the middle of campus for fun; they do it to respect the space of the camp.

“The aim of Peace Camp is to stand in solidarity for a whole week,” Hartman said. “Camping here shows that we’re always “on” and tuned in, that we’re not taking a break from the camp or the fight for social justice.”