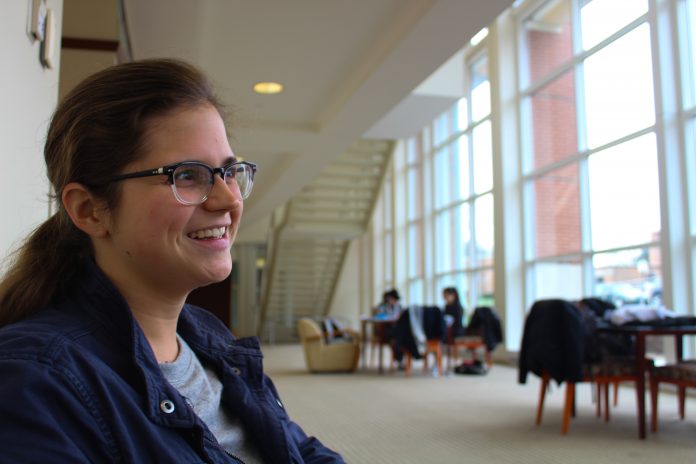 If you are ever walking in what is affectionately called Bum Alley in the Green Center for Contemporary Arts, you will most likely see senior Lindsey Welp sitting at one of the tables there.

And even if you don’t go talk to her, she will have people around her, saying hi, and joking with her as she smiles and procrastinates homework.

Welp is one of those people that others feel comfortable around, which works to her advantage because she’s always working in different spaces due to her double major in Music performance and French.  “It’s kind of interesting ‘cause I have two majors -- Music and French and they’re very different things, so it’s kind of like I’m in two worlds,” she said. “I didn’t mean to be a double major it happened on accident.”

Welp believed that music majors had a language requirement, which they do not. “Don’t look at old major requirement sheets,” she jokes. So she enrolled in a French class, and after a few courses she was convinced she needed to major in French. Welp spent last semester combining her two interests by studying abroad in Paris to study French and the saxophone. And while she was studying, she saw the similarities between both of her majors.

“Language and music are very similar-- but it’s like learning how to speak a language and practicing music are very similar in the ways you approach it, the methods through which you improve yourself,” Welp said. “But also rhythmically speaking, it’s like just saying French words and pronouncing them correctly does not sound correct. So there’s like a rhythm to it-- there’s a tambor to it. It’s also a lot of listening-- which is really cool.”

And Welp finds that her majors connect to the things that she is passionate about-- which is other people. “I just love like talking to people and meeting people and that’s something that I’m really bummed about because I’m meeting so many cool people who are in the CLA [College of Liberal Arts] and it’s like there’s so many cool people I haven’t met yet,” Welp said.

Welp’s favorite thing to do is talk to people. She loves getting to how people are really actually similar. “All of us are like super similar whether you acknowledge it or not. We’re all people. Even though on the surface everyone seems to be on opposite ends of the human spectrum, it’s like whenever you talk to people there’s so many commonalities,” Welp said. “I’m pretty hard pressed to find someone with whom I have no similarities to, because I think we’re all people and we all want to connect with others”

She also loves getting to hear other people’s stories. “We do a lot of producing noise, me included, and with playing music we’re always like most uncomfortable when we’re not playing. I think that as humans we’re uncomfortable with silence,” Welp said. “It’s important to take a step back and be aware of the environment and other’s ideas. And I think the best way to connect is to deeply listen.”