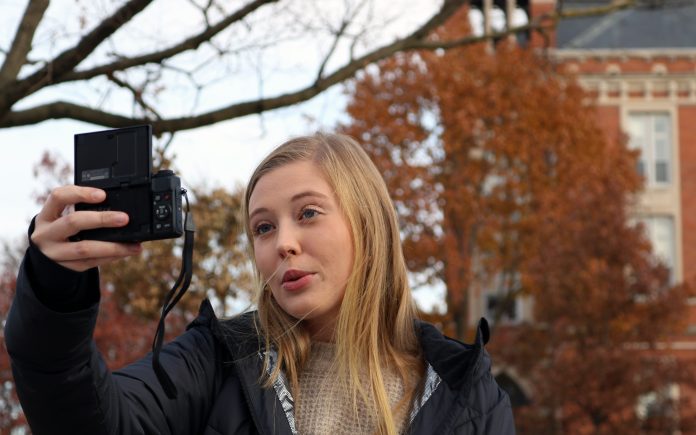 “(In August of 2017) I just watched a ton of YouTube. I feel like a lot of girls do, like we all just watch beauty tutorials and vlogs and hauls and all of that stuff. I really like Hannah Meloche, Summer McKeen, Danielle Carolan—she’s a favorite of mine—Olivia Jade. I love her, her life is so lux.

“So I was just back to school shopping with my sister and was like it would be so fun to vlog. And then she was like, ‘Why don't you just film a haul when we get home?’ I was like, ‘No I can’t, that’s so weird.’ But she was like ‘Well, just do it anyway. You've always wanted to do that. You should just do it, you love filming yourself.’ And I was like ‘You're right.’ So I did and then posted it on my newly created YouTube channel. That probably got like 100 views, maybe, and then from there it just kind of took off. It just became something that I just really love to do.

“At the beginning it was super awkward. You think that it's going to be easy and then you put yourself in front of the camera and you’re like what do I say. I think I would post like twice a month maybe and they were horrible. There were a few times when I would stop because people in school low-key hated me for it. They were just kind of like, ‘She’s weird.’ It kind of taught me to not care what other people think of you, and now I literally just do whatever I want. So at the beginning it was weird and awkward but then eventually I got used to it and decided it was something I wanted to put all of my time and effort into. ”