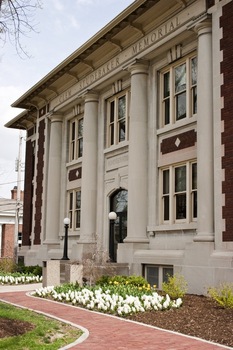 The committee asking for the meeting is the Faculty Priorities and Governance Committee, who wrote a letter to be sent to the Board of Trustees that states “DePauw is in a state of crisis.” The letter was read at the faculty meeting on Monday by David Worthington, a member of the committee and an associate professor of communication.

“The Faculty Priorities and Governance Committee writes this letter with deep collective concern about the health and wellbeing of DePauw University,” Worthington said. “We believe the best way to address the problem is to build channels of communication between the faculty and the Board.”

Regarding DePauw’s “state of crisis,” Worthington said, “We feel that there is a lack of trust between faculty and administration. Some people have expressed that to me as a climate of fear.” Faculty may fear disagreeing with the administration because they fear retribution.

According to Worthington, the way the administration’s handling of the racially-charged threats has contributed to a lack of transparency and trust between the faculty and administration. “We believe that a direct discussion with the Board might help develop some solutions,” Worthington said.

The Faculty Priorities and Governance Committee have also held two special meetings to address the concerns raised by the Association of African American Students (AAAS) regarding faculty governance. The students asked for representation on the Power, Privilege and Diversity (PPD) Committee to review PPD-submitted courses among other committees. However, no such committee exists, according to Chair of the Faculty Howard Brooks. Students are presently represented on other faculty committees, though they may not be affiliated with the AAAS. Current curriculum planning falls under the Curricular Policy and Planning Committee.

Another cause for concern among faculty was the motion to change the language in the Academic Handbook for how faculty respond to students’ religious holy days. The new language states, “Faculty members are expected to excuse students from class and be flexible with respect to deadlines for required coursework in order to enable students to observe religious holy days.”

Under the current policy, faculty are expected to accommodate students’ religious observances. Faculty mentioned that with the current policy students are put in awkward situations when discussing their religion with professors.

Kevin Kinney, a professor of biology, presented the first concerns over the motion due to his difficulty with rescheduling student work because of religious absences. “But to say that we are required to excuse the student means we let them off from work completely with essentially no questions asked,” Kinney said.

Meryl Altman, a professor of English and women’s studies, responded, “Every single year something important at DePauw is scheduled on those days [Jewish holidays]. It’s enough.”

However, the motion passed to change the Academic Handbook policy with no audible nays.

The faculty meeting concluded with remarks from President Mark McCoy. After thanking the faculty for their support of student concerns, President McCoy announced that the incoming first-year class currently enrolls 600 students, 15 students above the goal. However, the University is below its revenue target due to the financial aid it awarded incoming students, according to President McCoy.

David Alvarez, associate professor of English, also asked President McCoy what he would do differently regarding the administration’s response to the bias incidents. President McCoy responded that he regretted the press conference held for news outlets. “I think that the reception of others was that while all of this is going on, the President called a press conference. That wasn’t the situation at all. It wasn’t an effort to bring attention to it, to defend it,” President McCoy said.

Melissa Petreaca, an assistant professor of biology, also expressed concern about administration transparency and timeliness of information. “When I find things out on social media instead of administrative channels, that does bother me,” Petreaca said.

In his response, President McCoy said, “The things you read on social media, they know and we don’t.” The University typically does not become aware of an issue until it is reported. However, President McCoy hopes that the incidents@depauw.edu email account will help close the gap.

“The goal is always trying to be as clear as possible without compromising an open investigation without violating any protocol for the way things are supposed to be reported and without unnecessarily inflaming the situation,” President McCoy said.

The faculty meeting on Monday was the last meeting of the semester.