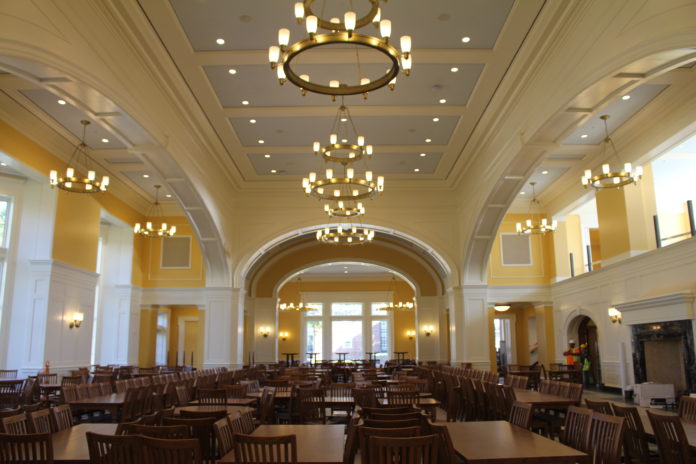 After 28 months of construction and $31.5 million dollars, Hoover Hall will open its doors to the DePauw University community for the first time on Monday.

Funded primarily by a gift from R. David and Suzanne A. Hoover ’67, the new hall will become the University’s main dining facility.

To ensure that everything was finished on time, certain events were rescheduled to make the deadline. “We shuffled the schedule around at different times for different activities to resequence activities to keep things rolling,” said project manager, Warren Whitesell.

The new dining facility, with a completely new set-up, is expected to be an upgrade from the old dining facility, The Hub, the previous dining facility located just below the Hubbard Center. The Hub was originally designed to serve food out of stations with no specific pathway for students to move about the space easily. “Everything is an upgrade,” said Whitesell, “Just the general space, the design in the space, the AV capability of the new space versus the old space, the flow, the niceness of it, all of it.”

Hoover will be able to seat 550 students and faculty comfortably, compared to The Hub’s 350 person capacity. Patrons will use chairs and tables that were handmade in Auburn, Maine. Each table has the signature of the craftsman who made it below in order to create a more personal environment. “That’s kind of a neat thing with very nice material and very nice quality,” said Whitesell.

One of the goals for the hall was to have large portions of it furnished by natural light so the structure has a combination of custom designed lighting as well as many large windows.

In addition to the central dining room, there are four other smaller dining rooms that can be reserved online via e-services by students or faculty. Each of the rooms has a specific color theme that the room’s donor had some input on. Individuals who choose to reserve these rooms can pay for a catered meal through Bon Appetit to be served. There is also a lounge that was designed to provide a place for faculty to meet with each other outside of traditional office settings.

The flow of students purchasing their food should come naturally to most visitors because the doors direct students around the different stations containing food and towards the large common space at the center of Hoover Hall.

The upgrade is not all aesthetic, Hoover’s kitchen, which Bon Appetit has been using for a week, is significantly larger and more efficient than the kitchen in the Hub. The new format should let the chefs cook food that will be better than before. The kitchen is furnished with both new equipment as well as some that was transferred from the Hub.

Hoover has three gender neutral bathrooms inside. The decision for gender neutral bathrooms was made early on in the designing process. “I think just because that’s kind of the trend that buildings are being built with that greater sensitivity in mind,” Whitesell said. “It seems like it was a timely decision, but it was more about how we identify the space that has been affected by more recent events.”

According to Whitesell, the biggest challenge to building Hoover was perfecting the small details in the time frame. “Probably the hardest thing was to picture the level of detail when it’s on a drawing versus when you start putting all of its pieces and parts together and trying to make sure you’ve accounted the time properly,” Whitesell said, “And just trying to maintain the same look and feel of all parts making sure that they fit together harmoniously the way we intended.”

While most of Hoover is already finished, there is still some work being done on the upper levels of the mezzanine. The building is expected to be finished for the grand opening on Oct. 31 during Old Gold weekend.

Students are looking forward to Hoover after eating at the temporary dining facility at The Inn at DePauw. “I’m really excited about Hoover Hall, especially after eating in the Inn that was really crowded and kind of rough,” said sophomore, Joshua Selke. “I heard there is better food so it’s really exciting because there will be variety after the Inn.”

Some students are looking forward to other aspects of the building besides food. “It’s a really nice building,” said sophomore, Abhishek Sambatur, “For me the most appealing part is more space to study, and I’m looking forward to seeing how it looks inside.”

Sophomore Kiara Goodwine wishes that Hoover had opened earlier and is puzzled by the opening being on Halloween. “Well I wished that it opened when we came back, but I understand that they’ve had this date set for a while,” Goodwine said, “But I’m also really confused about why it’s on Halloween, and there better be themed cookies.”