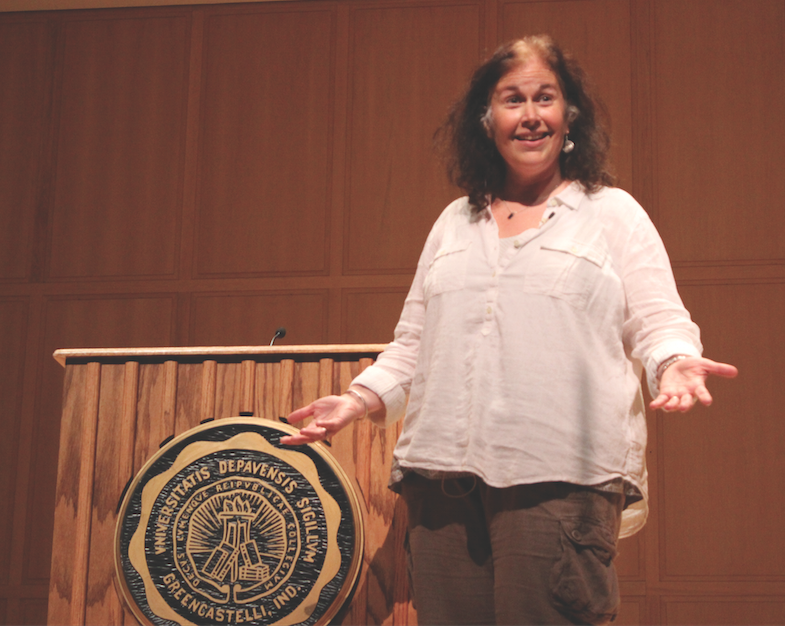 Dorothy Edwards, founder of The Green Dot, etc. Strategy spoke
to the DePauw community about by-stander intervention Thursday
in the first Delta Gamma Lectureship in Values and Ethics.
ERIN O'BRIEN / THE DEPAUW

Dorothy Edwards, founder of the “Green Dot, etc. Strategy”, visited campus Thursday evening to address the public about her bystander intervention program. The lecture is the first in the DePauw chapter of Delta Gamma's Lectureships in Values and Ethics series, a partnership with the Prindle Institute.

The Green Dot Strategy aims to prevent “power-based personal violence” through the use of bystander intervention.

When describing the strategy, Edwards told the audience to imagine a map of their community. Any time an assault or an instance of violence in the community takes place, a red dot is placed on that location.

On the other hand, any time violence is prevented or another community member promotes bystander intervention, a green dot is placed on that location.

“A single teeny tiny moment in time where someone says ‘I will use my choices, my behaviors, my voice, to make it less likely that the next red dot ever gets on the map,’” said Dr. Edwards about the green dot.

The goal is to have more green dots than red on the map.

The Green Dot Strategy also stresses that green dots should not just be reactionary.

“Even as you are responding to red dots that come up right now, what could you be doing on a daily basis to change the norms around here such that it’s less likely for a red dot to ever come up again,” said Edwards.

She suggested that people share stories of bystander intervention through social media and interpersonal conversations.

“Find your connection and to this and talk about why this matters,” Edwards told the audience.

Edwards serves as Executive Director of Green Dot, Etcetera. It is a nonprofit organization "dedicated to violence prevention education," according to its website.

“My personal and professional mission have always been the same,” said Edwards.

Edwards shared with the audience that she was raped at the age of 19, and that she has no doubt that is a part of her journey to beginning the Green Dot, Etcetera.

Haley Pratt, president of the DePauw chapter of Delta Gamma, thought that Edwards gave concrete examples of how to implement bystander intervention.

“I think she gave a lot of practical advice and I just hope people take it to heart,” said Pratt.

Danielle Wenning, director of lectureship at the DePauw Chapter of Delta Gamma, said that Edwards aligns with many of Delta Gamma’s values.

“Prindle actually had a large part in choosing our speaker with us, since they are the values and ethics institute. So combined with some of our interests and their expertise we kind of arrived at this decision so we’re very happy with who we ended up with,” said Wenning.

Andy Cullison, irector of the Prindle Institute for Ethics, introduced the lectureship series and shared more about the partnership with Delta Gamma to help organize the event this year and in the future.

Before Thursday night’s lecture, Edwards visited with Delta Gamma and other classes at DePauw.

“It’s been awesome, both because I’ve gotten to meet this broad spectrum of really cool faculty, staff and students, and within those meetings, everyone seems jazzed about the possibility,” Edwards told The DePauw. “Everyone seems really open to the possibility of 'gosh this could be different.'"

The Lectureships in Values in Ethics was established in 1992 by Dr. Paul Martin in order to honor his 50th wedding anniversary with his wife, Dorothy Garrett Martin, an alumna of the Eta-Akron chapter of Delta Gamma.