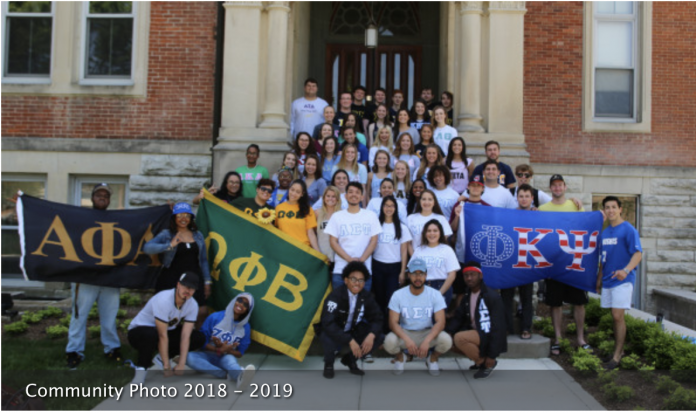 More than half of DePauw students believe that joining Greek life is an integral part of the “DePauw Experience,” according to a The DePauw Instagram poll on Nov. 12, answered by 348 students.

However, over the past 5 years, Greek participation has declined by 10 percent, and the university, which had previously sat on the Princeton Review’s “Colleges Biggest on Greek Life” list for about 15 years in the early 2000s, may be evolving into a different social scene.

Greek life began at DePauw over 175 years ago. Beta Theta Pi’s Delta chapter was the first fraternity on campus just eight years after the school was founded. DePauw is also home to two Alpha chapters,  Kappa Alpha Theta and Alpha Chi Omega, which have since grown into national organizations.

“Every human being has the desire to belong to something. I wanted to belong to a sorority because it gave me instant friendships, guidance, and personal development,” said DePauw alum Kristi Anderson Thompson, ‘73.

Thompson participated in formal recruitment in the fall of 1969, one week into her first-year. She joined the Iota chapter of Kappa Kappa Gamma after her second day of recruitment. She vividly remembers the excitement of bid night and running from Meharry Hall all the way to the front steps of her newfound sorority.

Although formal records of Greek participation at DePauw began in 1990, Thompson reports an approximate 85-90 percent student involvement during her time on campus.

“All the houses were full, full, full,” Thompson said, shaking her head in amazement. At the time, Hogate Hall served as the only housing option for unaffiliated upperclassmen women at DePauw, demonstrating the prevalence and priority of participation on campus, according to Thompson.

Life at DePauw in the early 1970s revolved around the Greek system, according to Thompson. The chapters held a healthy level of competition amongst each other as they strived for achievements such as the highest grade point average or the most money raised for fundraising events. Unlike today, the social scene did not revolve around stereotypical fraternity parties, rather organized activities and philanthropy events hosted by Greek chapters.

Nearly 40 years after Thompson’s graduation, Greek life participation averaged about 71 percent in the early 2000s, when the university gained recognition for its Greek life. An article published in the Indianapolis Star in 2013 titled, “DePauw Makes List of Top 20 Party Schools in the US,” discusses the university’s recurring placement on the list made by the Princeton Review, despite the school’s small size and rural location.

In 2006, DePauw’s Greek Fact-Finding Commission reported, “The Greek system has been and remains the core of the DePauw social experience... second only to the quality of the academic experience in importance.”

Since 1990, participation in Greek life has displayed a slow decline in overall student involvement. In recent years, however, this downward trend has grown, from a trickle to a fallout. In the last five years alone, Greek participation has declined by 10 percent, according to DePauw University’s Department of Institutional Research.

Since the spring of 2020, DePauw’s Greek participation is at an all-time low, with only 62 percent of students in houses. While the exact cause of the decline is unknown, students have multiple opinions about the record-low numbers.

Abigail Yu ‘18, an alum of Pi Beta Phi, views her Greek involvement as a positive experience but as a student and active participant from 2015 to 2018, Yu experienced firsthand the dramatic decline in student involvement.

When she went through recruitment during her first-year, she felt it was a way to be included in the social scene. “It [formal recruitment and joining a house] really was just what everyone seemed to be doing.”

In 2015, during Yu’s sophomore year, Mark McCoy was named president, and a series of administrative changes correlated with what Yu ‘18 saw as a decline in Greek participation. She watched as he and the university cracked down on parties and campus drinking culture, and a significant increase in Public Safety presence forced students to be more careful about alcohol consumption and large gatherings. There was a push to register parties with the university which required security detail and a formal sign-in system, which led to fewer official open parties according to Yu ‘18.

Yu ‘18 speculates that a generational change could be another reason for the decline in Greek affiliation. She believes that Gen-Z tends to be more individualistic, seeking freedom rather than belonging to the apparent “stereotypes” to which each Greek chapter may be affiliated.

However, the drop in Greek involvement is not unique to DePauw, as schools around the nation have seen similar declines. Mainstream media has shed light on the negative sides of Greek life, such as hazing scandals, sexual assault, binge drinking, and a history of exclusion. “The War on Frats” published in August to the New York Times shows the fall of some of Vanderbilt University’s Greek organizations due to a history of racism and Black Lives Matter activism over the summer.

The negative tropes associated with Greek organizations discouraged Matthew Wilson, a recent transfer from DePauw, from joining a fraternity during his time as a student.

“Once you’re in the house you feel pressured to seek the approval of the other guys in the house,” Wilson said. “Regardless of how you have to gain their respect, it’s usually through unhealthy behaviors.”

He was unable to find the house that best fit the lifestyle that he wanted to promote.

“Dudes just thought I was a ‘p****’ for not rushing, but I never asked for their opinion and they didn’t ask for mine,” said Wilson.

Although Wilson transferred from DePauw in 2020 for academic reasons, he notes that the university’s majority Greek affiliation was a factor in his decision. He says that Greek involvement plays a major role in a full “DePauw experience.”

Another component of declining Greek participation on DePauw’s campus is the correlation between the rapidly increasing rate of the diversity of the student body. In the past five years, there has been an 8.7 percent increase in representation, with international students and people of color now comprising 36 percent of the student population. This raises questions about what demographic of students go through recruitment and find a place among Greek organizations.

Kennedy Stepp, sophomore, is a member of Alpha Phi, a woman of color in the predominantly white sorority. She’s seen her experience as positive and as a great way to get involved on campus. Though international students and POC can feel excluded from the recruitment process, Stepp said.

In the 2018 Fraternity and Sorority life annual report, of the 1,295 students who were part of greek life, only 20 percent identified as domestic students of color.

She credits this to the implicit biases that many students have, yet do not actively recognize.

COVID-19 and the Greek Experience

As another year of recruitment rapidly approaches, chapters worry about the culmination of the already small class size and low-turnout, combined with virtual recruitment in response to COVID-19 guidelines.

92 percent of students think that COVID-19 guidelines and virtual recruitment will affect the number of students affiliated with Greek life on campus (out of 369 responses), based on a survey posted by The DePauw.

One of the main concerns students expressed was that first-years have had little exposure to the Greek organizations and limited interactions with upperclassmen participants who were required to reside off-campus. This is due to tight restrictions placed on students residing on campus during the fall, which limited Greek houses from hosting prospective members or holding philanthropy and recruitment events.

Other students believe that virtual recruitment will negatively impact participation in Greek organizations, and argue that the process could yield increased superficiality. Kathleen Curran, a senior, believes that “virtual recruitment does not allow first-years to meet upperclassmen organically.”

Peter Reuling, another senior, agrees, stating that virtual recruitment does not provide an accurate representation of the houses they attend during the rounds.

The eight percent of DePauw students who remain hopeful about the effects of virtual recruitment believe that it could lead to increased accessibility and inclusion for all students.

Michael Ocasek, a junior unaffiliated with Greek life, said that COVID-19 guidelines put in place this fall could actually increase the number of first-year and independent students willing to rush because the current health crisis may make it more challenging to meet and maintain friends, thus motivating them to participate in social organizations.

While participation is declining for various reasons, the social and networking opportunities that Greek life offers is a compelling factor for many prospective students. In a survey by The DePauw, 35 percent of respondents said that DePauw’s reputation as a “top party school” and majority Greek involvement attracted them to the university.