Student leaders are relying on Instagram to get their messages out as they gear up for DePauw Student Government elections this week.

While students will be voting for more than just the highest offices on Tuesday, The DePauw spoke with the five students running for DSG President and Executive Vice President. 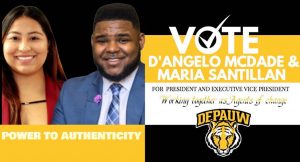 Both D’Angelo McDade and Mari Santillan stepped into roles within DSG mid-year this year.

McDade, who is running for DSG President was voted in as executive vice-president in December following former DSG President Summer Pappachen’s resignation. DSG Executive Vice President candidate Santillan took over as Vice President of Student Life in January after the former VP left to study abroad for the semester.

McDade and Santillan said they see their roles in student government as opportunities to be advocates for the larger student body.

“The platform that Mari and I have created is very pliable and interchangeable. Things will always change due to the nature and the climate of our campus,”McDade said. “We invite comments, questions, concerns, or even criticism regarding this platform because at this point we're only looking to better DePauw.”

Santillan added, “We both acknowledge that we are not the sole DePauw experience. We are here to be a collective and to create a sense of unity within what we want to achieve.”

McDade and Santillan have several proposed efforts, including continued efforts to increase transparency and student involvement in university processes. “Student government needs to be more active within a majority of the processes within the university. What this means is having student representation in a variety of conversations and boards,” McDade said.

McDade and Santillan would also like more information from the Board of Trustees. DSG gives a semester report to the BOT, but they would like to receive a report back from the BOT.

McDade explained that while the DSG senate has many committees for students to be involved in he wants to open them up to the whole student body for more input.

McDade and Santillan would also like to look back at DePauw’s protest policy. “Is it denying students’ civil rights? What is the wording? What are the consequences of protest? Are we suppressing our students from being advocates? Are we limiting their activism?” Santillan said.

For international students they’d like to continue transportation opportunities and will advocate for an additional designated school official.

McDade noticed a need within the LGBTQIA+ community. “We currently do not have an office or anyone who's dedicated to supporting or finding resources for individuals who are identified anything other than being a heterosexual on our campus.” The pair believes it might be beneficial to transform the Women’s Centre into the Women, Gender and Sexuality Center in order to serve underrepresented students.

Santillan said, “We genuinely believe that we are taking these students in as an institution. We welcome these different students from different communities, and so we need to find a way to actually support them.” 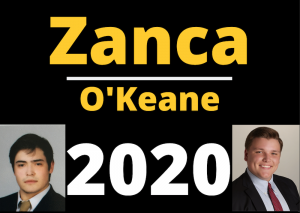 Joe Zanca and JD O’Keane have no experience with DSG, but they are involved in both athletics and Greek life, two experiences which have shaped much of their platform.

Zanca, a junior, is running for DSG President with first-year O’Keane as his executive Vice President.

Zanca and O’Keane want to “defend and support DePauw Greek Life” according to their posted platform.

O’Keane wants people to see the positives of Greek organizations. When facing health issues this semester, O’Keane said his fraternity brothers came through. “They really pushed me to my full potential to stay in school. I mean I was two seconds away from medically withdrawing, and they really did support me. It's images like that that I want the community to realize Greek life does have very positive effects on hundreds of students in our community,” O’Keane said.

Zanca says he recognizes that there is a divide on campus due to Greek life, and while he does not want to pretend that Greek organizations haven’t made mistakes, he does “want to heal some of those wounds that are on this campus because of it.”

O’Keane said, “Being a member of the football team I know how important it is to work as a unit so I came up with our campaign slogan ‘Uniting Through Excellence.’ I wanted to take that DePauw tradition of striving for excellence and use that to unite all students.”

The largest part of Zanca and O’Keane’s platform revolves around increased community service. O’Keane sees a great opportunity for unity through service. “I'm hoping that an annual day of service would unite our students under that one goal to improve the community around us.”

Regardless of what the university decides to do about returning to campus, Zanca and O’Keane said that if elected they would be prepared to ask DePauw for more mental health services. O’Keane said that he personally had to wait two weeks to be seen by DePauw Counseling Services last semester.

“We're not serving 40,000 students. We've got 2,000 students that we need to take care of. And especially with COVID I think we need to have those services in place because a lot of people may feel uneasy coming back to campus,” O’Keane said. 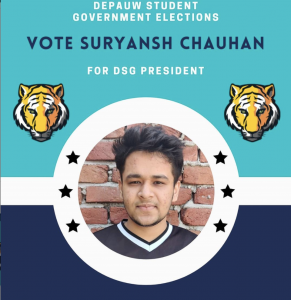 First-year Suryansh Chauhan, who is running for DSG President, spoke with The DePauw via email.

He wants to focus on “democratizing DePauw further to a position where the students have the last call in issues affecting them.”

Chauhan would like students to be involved in discussions about curriculum. “The students have enough liberty in designing their majors but surely not in the curriculum designing and course outcomes. The youths are full of energy and innovative ideas,” Chauhan said.

Some of his goals include redefining “the way DePauw communicates with, represents and serves its student body” and creating “new avenues for DePauw students to be supportive to their peers in difficult situations” such as a contingency plan and fund for situations like the one students currently are facing.

He’d also like students to have the “liberty to suggest a mechanism to protect [students] against the freely falling currency exchange rates and melting economies” that are making their lives hard on campus.

Though first-year Chauhan has no experience with DSG, he said in an email that because of his involvement with various clubs and organizations on campus he feels he understands “the student life on the campus, the resources available, the problems associated, and the mechanism to sort them out.”

He also referenced a “history of bringing stakeholders together to support student groups and motivate them to fund their ideas and programming” in his platform.

Chauhan explained that while he was in school in India he “had the privilege to be exposed to collaborate and lead a wide variety of national campaigns and community programs and drives likes of Clean India, Save Girl Child, and National Nutrition Mission to name a few.”

“The beauty of a collaborative approach, I believe, is that it offers flexibility and refinement as one travels along one’s journey,” Chauhan said. “No single person has all the answers in any situation - it's only through the ‘marketplace of ideas’ that collaboration facilitates, that a great solution can be achieved.”

All candidates’ platforms can be found linked to their Instagrams.

Students will be able to vote on Campus Labs starting April 28 at 9 am EST. Voting will conclude April 29 at 10 pm EST.

On April 30, election results will be announced to the student body via email and the newly elected students will step into their new positions.