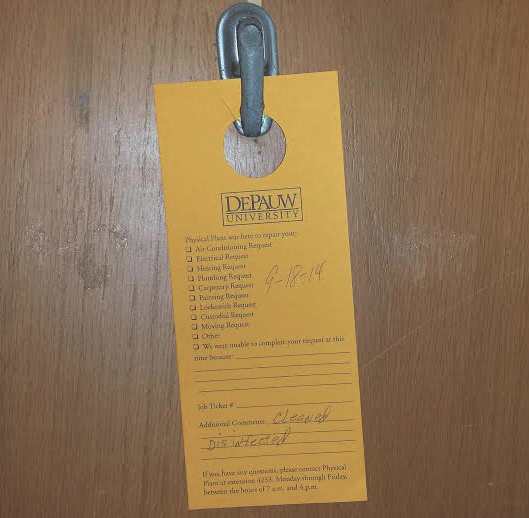 Facilities Management left cards on the doors in
Hogate Hall to tell residents their rooms had been
cleaned and disinfected.
MARISSA HIGGS / THE DEPAUW

Much has happened regarding the mold in Hogate Hall over the last week.

On Sept. 17, students residing in the freshmen dorm building received an email from Facilities Management informing them that "Micro Air would be conducting air quality testing in several areas of Hogate." That afternoon, common rooms and randomly selected dorm rooms were addressed.

Members of Facilities Management began cleaning every dorm room on Sept. 18. Yellow messages were left on each door explainging that the rooms were indeed both cleaned and disinfected.

After news of mold in Hogate broke out, the school took immediate action to ensure the safety of its students.

Richard Vance, the Associate Vice President for Facilities Management, is responsible for the operation and management of all two million square-feet of buildings on campus, as well as campus grounds. When he noticed a trend of complaints, he pulled together a team of eight Facilities Management employees to go through each of the 96 rooms in Hogate and take care of the problem.

The team used mostly a product known as RJ8, which controls surface mold and mildew, and were able to clean the visible mold from the isolated cases throughout the freshmen dorm building.

Another step was also taken by Facilities Management in order to further test and check for mold.

"We do two or three things," Vance said. "Part of the one that's most significant is we bring in a third party, a testing agency that we use routinely. The name is Micro Air and they do two types of tests. They do an air quality test and they do a surface test. Specifically related to Hogate, they took 14 different air quality samples in 14 different locations."

While most of the air samples were taken in either individual rooms or common rooms, one was taken outside of Hogate in order to test the fresh air that may enter through doors and/or windows.

The results of these tests are back and Vance says there is no reason to keep them a secret. Anyone with concerns can contact Facilities Management regarding the results. However, Vance says that out of the five rooms that contacted facilities with work order requests, in only one did they find something "out of the norm.” The air tested positive for mold, and they found mold in isolated cases throughout Hogate.

Ines Hayouna, whose room had the surface mold on her air conditioning vent, says that her room has been cleaned and the mold is gone.

"I still am kind of sickish, but the mold is no longer visible," she said.

As of right now, Hayouna believes she will continue to live in Hogate and not try to move into a different dorm building.

Angel Riley, the vocal performance major living on the third floor of Hogate, was extremely concerned with the mold problem in her room. She went as far as requesting a room change. Riley and another music major living in Hogate were assigned a different room in Bishop Roberts Hall; however, Riley is not certain she will move out just yet, saying that other factors will come into play.

As an extra precaution, Vance said that facilities checked for mold in the Wellness Center located on the first floor of Hogate. Vance talked to Dr. Scott Allen Ripple in an effort to see if they could correlate what they were seeing from reports in work order requests to reports of illnesses by students living in Hogate.

While there was an uptick in respiratory complaints, Vance and Ripple would argue that with about 550 new freshmen arriving on campus and moving into a new environment, it is not uncommon to have these types of minor sicknesses among some of the students.

"There is mold in the air," Vance said. "So it's logical that there is mold inside Hogate Hall. I would say that same thing about any facility at the DePauw campus. The prevalence of mold occurs and can occur often in the spring time and in the fall as we see seasonal changes."

The question for Facilities Management is not do they see mold, but rather do they see anything out of the ordinary that can be especially dangerous or harmful to people.