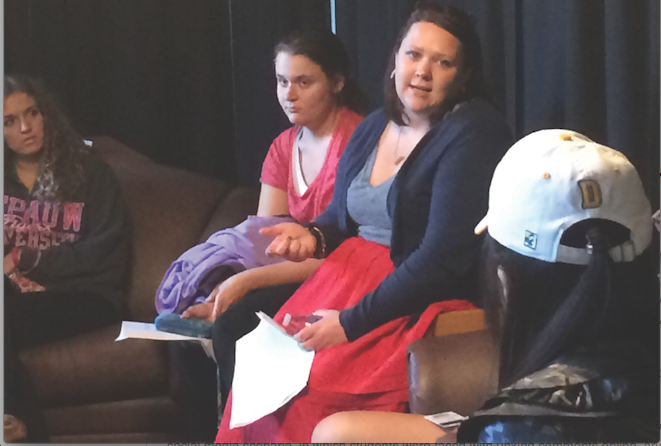 In an attempt to better familiarize first-years with scenarios involving alcohol and sexual violence, DePauw University has remodeled its intervention education program.

Every year, DePauw first-years go through a program to teach them about reacting to difficult situations that could arise as they start college. Last year, it was called “DePauw Gets Graphic.” Students made their way through downstairs Longden or Humbert, watching videos and students act out possible scenarios involving alcohol or sexual violence. Afterwards, they discussed their thoughts with their mentor groups. This year, the event is called interACT, and the students became active participants.

“Basically, the main difference between this year and previous years is that we actually had someone that’s a freshman student going through the program there in the situation,” said Claire Halffield, sophomore and actor in one of the skits. “So they were the roommate of who was coming back from a party and they had to try and intervene.”

The students witnessed and/or participated in seven set-ups. The first was just a conversation about the “three Ds of bystander interventions”—direct approach, distract or delegate—and what personal obstacles students felt they faced when presented with a difficult situation, such as shyness, and their perspective.

“It doesn’t mean you have to change who you are, but you figure out ways to work through the obstacles,” said Dorian Shager, dean of students and organizer of the event. “The first scene kind of framed the night.”

The students then had six interactions throughout Humbert or Longden. First were videos about alcohol and then discussion with their group. Next was a social media scenario, in which students were faced with unkind comments online, and volunteers could type into a computer how they would respond. The students then were put in a room where they “overheard” a potentially sexually violent situation, and they had to decide how to react.

After these three, the first-years went through three scenarios played in front of them. “We had thirteen great upper-class students that volunteered their time to act, and they did a phenomenal job,” Shager said.

At the beginning of each scene, they asked for a volunteer from the group to participate in the skit with them. The volunteer then had to decide how to handle the situation. The first scene was of students drinking in their dorm room, and one person has clearly drunk too much.

The next scene centered on issues of diversity and identity. One student was saying hurtful comments and microagressions towards another, and the volunteer had to decide how to step in. This addition is a new to the first-year programming.

“Part of that is an issue in response to the campus conversations we were having last spring,” said Shager. “One of the things that came out in those conversations was that a number of students were coming out and saying ‘Hey, we get that DePauw cares about alcohol and sexual violence, we remember that from orientation. We didn’t get those same messages in orientation about issues of identity and difference and power and privilege.’”

The final scene involved a potential sexual assault, where one student tried to get another to go back to their room with them, but the other student is too drunk to make that decision.

Feedback so far has been generally positive. Said first-year Christ Lowry, “To see it in person makes a difference rather than just hearing about it.”

The students filled out a survey after participating in interACT, and Shager said that most of the ones he’s read have been favorable. “I’ve been going through the data, and the feedback is phenomenal,” he said. “This was absolutely very effective. Students are reporting that they are comfortable.”

First-year Andrew Saunders felt that it was effective. “It’s a step above the videos,” he said. “When you see it live, it really makes you think about what you would do.”

Zaheen Rashed - February 25, 2021
0
1. Campus Activities Weekend Update The grand opening of the Beer Garden is this Friday, with the 6-8 p.m. slot open to all students, and...

Share Your Thoughts: Transitioning Back Into Fully Remote Students