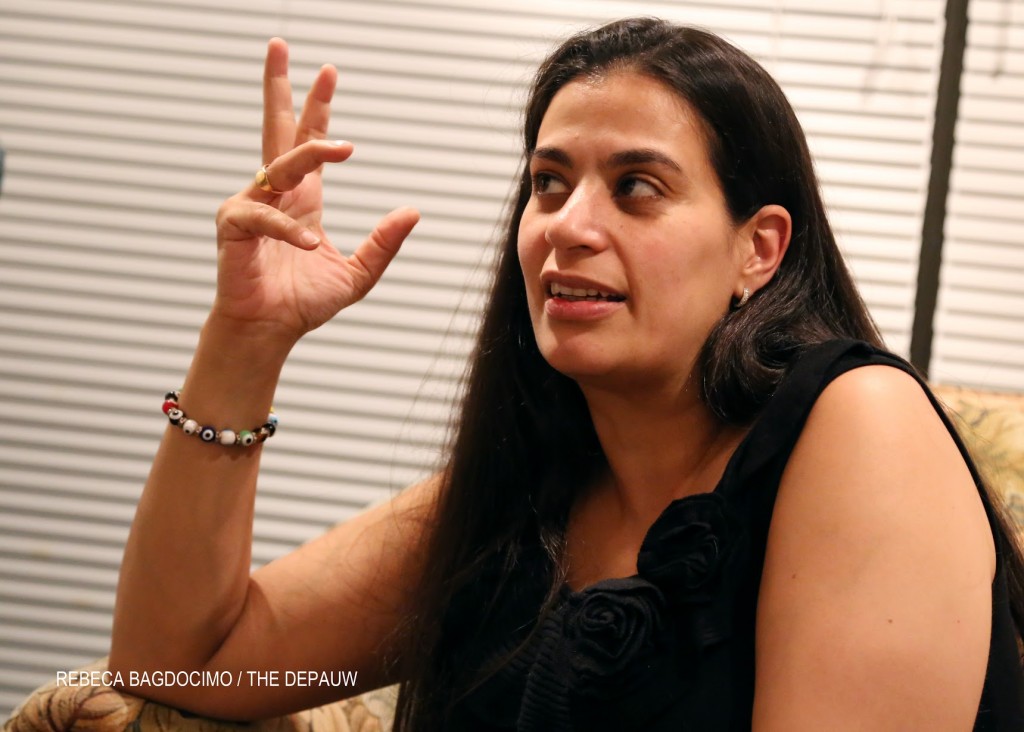 Maysoon Zayid describes herself as a comedian during an interview prior to her lecture in Kresge Auditorium on Monday evening.

Though she has been a tap dancer since a young age, Maysoon Zayid’s lecture Monday night in Kresge Auditorium was reminiscent of another style of dance, as the night’s program was titled “If I Cancan, You Cancan.” Through her sharp sense of humor, Zayid shared her story of overcoming adversity and discrimination while still owning up to her identity.

Zayid’s visit to DePauw was this year’s Delta Gamma Foundation Dorothy Garrett Martin Lecture in Values and Ethics and was presented by the Prindle Institute for Ethics. DePauw’s chapter of Delta Gamma is one of only 19 in the nation to have this lectureship on their campus. The Conflict Studies department, the Office of the Vice President for Academic Affairs and the Hartman House were also co-sponsors of the event.

Some people might, including Prindle director Andy Cullison did before he met Zayid, initially question why a comedian would be part of a lectureship on values and ethics.

“I asked her about it when I met her,” Cullison said, “and she said that comedians are becoming the new faces of activism because, unlike media or politicians, they don’t answer to anyone, so they can speak freely.”

Due to an accident during her birth, Zayid was born with cerebral palsy, a condition that causes impaired muscle function. Though it does affect her daily life, she has, largely through the efforts of her parents, been able to accomplish things many others with this condition cannot.

Her father helped her learn to walk two different ways. First, by placing her feet on his as he walked. The second was by dangling a dollar bill in front of her face and making her chase it.

“My inner stripper was strong,” she said. “Because of this, I was running in stilettos by kindergarten.”

As much as she appreciates her parents teaching her to walk, she was quick to clarify that there is no shame in not walking or using any kind of mobility aid.

Zayid, a comedian, actress, writer and disability activist, believes that she hasn’t made it yet. The closest she came, she said was when she became a full-time contributor on “Countdown with Keith Olbermann.” However, with that accomplishment came attacks on her for her ethnicity, religion and disability.

“People wrote such horrible things about me, and then hid behind anonymity on the Internet,” she said. “Don’t become an Internet troll; look up silly pictures of cats instead.”

After this, she came to learn that she could not let other people define her. Whether in her appearance or her television presence, she stressed taking ownership of yourself.

Zayid said that one major issue that needs to be conquered before she can say that she’s made it relates to media portrayal of disability. People with disabilities are the largest minority in the United States but have the least representation in media. Also, when people with disabilities are portrayed, it is able-bodied people portraying them, which she and other members of the disabled community find offensive.

Though she defines herself primarily as a comedian now, Zayid said comedy started for her as an avenue to getting into television; when she looked at popular media, the only people who looked like her were comedians, so she aimed to emulate them. She cites Carol Burnett, Richard Pryor and Amy Poehler as some of her influences.

The lecture’s title comes from Zayid’s father favorite phrase to use to encourage her to pursue her dreams as she was growing up. He would say to her, “You can do it; yes, you cancan!” Zayid ended the lecture by inspiring the crowd with this phrase, telling the audience, “If I cancan, you cancan.”

Those who were able to meet and listen to Zayid during her visit came away inspired and amazed by her.

“I’m so glad I was able to bring her to campus and give her a chance to share her amazing story,” said Cate Hensley, director of lectureship for DePauw’s chapter of Delta Gamma, “and I’m so grateful to Delta Gamma for giving me the ability to do that.”