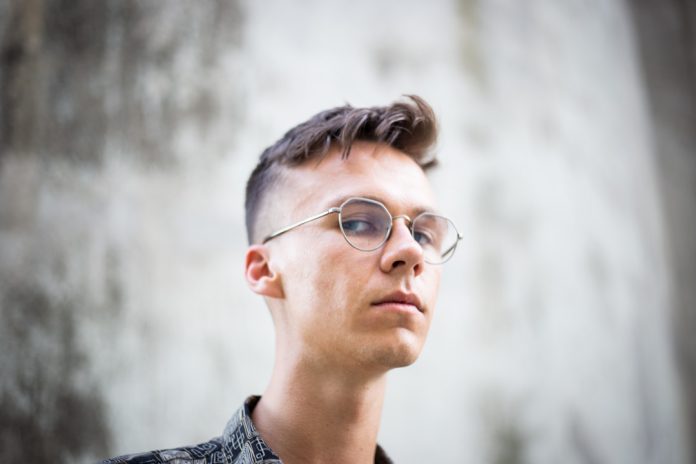 Byron: We’re with Andrew Walther today. I see you came in with the fresh fit. Tell me about what you’re wearing today.

Andrew: My dad’s shirt. 11 dollar pants from H&M. The only things that’s nice are the shoes. They’re Vince.

I don’t like when people wear stuff that’s super in-your-face gaudy. They’ll walk around wearing big brands trying to flex and it’s like, chill. Calm down. If you want to wear nice stuff, you should do that. But just because you’re wearing a shirt with a big logo on it doesn’t mean it’s fashion. I like to do stuff that makes me feel good without being overly flashy. I like to wear nice [clothes] but I don’t like to shove it in people’s faces. I’m wearing it for me. It’s not for somebody else. It’s not for recognition.

Andrew: The people who want to be a part of the clout culture -if you really wanted to do that, you’d be wearing your own stuff and you’d be making your own images rather than wearing what everyone else is wearing.

Byron: Why do you think that is?

Andrew: Status. It’s kind of unfortunate because in one aspect, they’re not doing anything different. And then in another aspect, for somebody who wants to be that or thinks that’s what they should be or can’t afford it, [then it] makes them feel bad. If you want to subscribe to brands, that’s fine. But I think it has more effects than you think it does other than just trying to flex on people. You don’t go out and wear that without being like, “Hey, I want people to see me. I want people to know what I’m wearing.”

Byron: What about you? How did you develop your style?

Andrew: I like to wear what makes me feel good. I’m kind of lanky, obviously. Not kind of, but very. So figuring out how to dress for that helped me. Pairing things with something that’s tighter versus something that’s more loose and flowing. Kind of what I’m wearing now. I like a lot of colors. I like big, loud prints. The only problem with that is [if] you’re buying some big, loud print from somewhere, odds are six months later, everyone’s going to have that print. So you have to keep up with that. It has it has its pros and cons, but if you’re the first one there, you look baller.

Byron: How does your style developed since coming on to campus?

Andrew: It’s starting to be in a place that’s more streamlined. I would say freshman year, what I would wear is very different from what’d I’d wear now. Freshman year, it’s like you wear them [clothes] because you’re worried about what other people are thinking. Sophomore year, people know my identity at this point. They know me. Freshman year, they didn’t know [about my sexuality] and I wasn’t completely comfortable sharing that. I think that this year, I’m much more comfortable. This is something I’d wear to class. Last year, it’d be like you don’t want to wear something that’s attached to a stereotype. I think now, I’m much more comfortable wearing whatever because people know me for me.

Byron: What do you mean know you for you?

Andrew: I didn’t want to wear something that’s going to be overly flamboyant my freshman year. For all things considered, our campus is pretty masculine. It’s pretty homogenous. You don’t want to be othered. I didn’t want to wear the super flamboyant stuff. Although, I’m perfectly ok wearing that at home. My friends at home recognize me and they’ve seen me through the process of being out. But here, no one necessarily knew that from the start. So now, people know that about me and I don’t really care about it. It’s publicized on social media now- didn’t use to be. I’m just much more comfortable.

Byron: You’re in a frat right? It’s interesting how your identity meshes with the heterosexual norms associated with that part of Greek life.

Andrew: Overtime, it’s one of those things that become more a part of you. Last year, especially being in a fraternity, I didn’t necessarily want to wear something or present [myself] in a way where when they see me, that’s exactly what they think of and that’s it.

Byron: What’s wrong with that?

Andrew: That’s just a part of me. It’s not me. I don’t have to walk about be like, “Hi, I’m this and also my name is Andrew.” I don’t want that part of me to be the forefront. Although, I’m not ashamed of it. There’s just so much more that I’m interested in that is me. I’m gay, obviously. My family knows. My friends from home know. Coming into college, it’s not like I’m going to go back and be silent about that part of me.

Byron: But you didn’t want to communicate that through your style?

Andrew: Right. And that’s just a part of my own thing that I had to work through with maturity. A lot of internalized homophobia. You can be queer and still be internalized homophobia. You can be queer and still be internally homophobic about yourself. Are you comfortable with yourself? Are you comfortable with presenting? Are you comfortable with it coming up in everyday dialogue? Are you going to be worried if it comes up and somebody doesn’t know? Whatever I was wearing,I didn’t want that to just be the trigger that set off the conversation about my identity. I was patrolling myself. Trying to make sure that wasn’t the first thing that came to people’s mind. Because I didn’t want them to judge me or have a single story of what I am because of how I looked.

Byron: How has it been being queer in a fraternity?

Andrew: I’m pretty tolerant of people. More than I should be. When something gets said, saying things like “f--,” - not within my house, but other people, I hear it. But am I going to put my energy into this? Or is this person just uneducated? In [Sigma Xi] it’s pretty good. There are other houses that are iffy on it. But that’s fine ‘cause I’m not there. And I’m with the people I’m with.