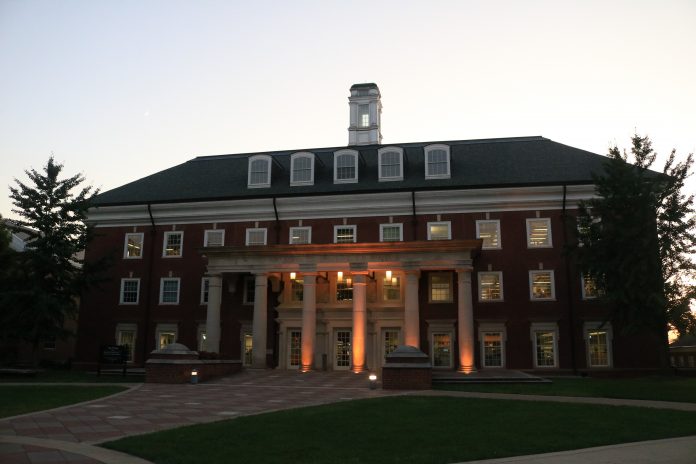 According to Rick Provine, director of libraries, there are currently about 80 student employees in Roy O. West, Prevo Science and the music libraries. This includes the addition of six positions with the newly created title of student manager.

Neither Provine nor Jana Grimes, executive director of human resources, would confirm exactly how many library employees were laid off last year, or what their titles were, but according to a list that was given to each laid-off staff member and widely distributed on social media last semester, at least ten were library employees.

Both Provine and Grimes said that work-study students have not been used to replace laid-off employees, which would be a violation of federal work-study regulations.

A direct conclusion couldn’t be established whether DePauw is in violation, but it is illegal for federal work study positions to “displace employees,” according to the U.S. Department of Education’s Federal Student Aid Handbook.

“Replacement is interpreted as displacement,” reads the regulation on page 6–43. “Therefore, replacing a full-time employee whose position was eliminated (for any reason) with a student employee paid with federal work study funds is prohibited.”

Following the lay-off announcement last spring, Grimes said there were many conversations about restructuring the university’s workforce to create the most efficient model. But, “at no time was there a discussion of replacing those positions with student employees,” she said.

Provine said that no students are being asked to do any jobs that they didn’t do before.

“We have professional librarians who have degrees and are faculty members, and we certainly are not asking students to do the things they did,” Provine said. “There is staff-level work that has, for years, been completely augmented by students throughout the library. I do think we’re certainly relying on that.”

In addition to the six student managers, between 25 and 30 students work as circulation assistants and a few work as research assistants. Those numbers come from a work study student who wished to be kept anonymous in case of personal repercussions at their job.

The source also said students were made aware of the new student manager position after the staff layoffs were announced on Feb. 26 in a faculty meeting.

Junior Megan McDaniel has worked in Roy since her first year and is now a student manager. Though she doesn’t think the work is difficult, she does think the federal regulation might be in violation.

“I mean when the staff got cut, (the university) didn’t really have another option,” she said. “They had to make student workers take on more roles and responsibilities we wouldn’t have had otherwise. Usually, students wouldn’t be working without a supervisor. Before, students wouldn’t have to lock up and open the library.” The anonymous source gave the same information.

Though the library keys do not leave the building, student managers are responsible for closing Roy and locking up, as well as opening in the mornings. Additionally, there are no staff supervisors on Saturdays, said the anonymous student.

“The library is by the kids, for the kids, at least on Saturdays as I like to joke,” the source said.

In an email, Provine confirmed that student managers do lock up Roy during the evenings and that there are no staff scheduled to work on Saturdays but that some staff remain on call if emergencies or other issues arise.

“When evaluating the needs of the library, we concluded that we did not need for (staff) to be on premises at all times the building is open,” he said in the same email.

He added that students unlocking and locking the library doors, as well as working without staff supervision at times does not mean students “are now performing material responsibilities of our staff. This isn’t the case.”

In line with the federal regulation, the titles of the work study positions are not the same as the laid off staff positions.

Both McDaniel and the anonymous student said the student managers make $8.25 an hour, while circulation assistants make $7.25.

“I don’t think anyone is knowingly breaking the law, but I suppose that doesn’t really matter,” the anonymous student said. “Student workers have some of the responsibilities that past staff did. We are doing the work that people who were eliminated were doing.”

“We have the best staff at the university,” Provine said. “Nobody enjoyed what happened last spring. Nobody likes to lose their friends and staff. But I will say that we just have an excellent staff.”