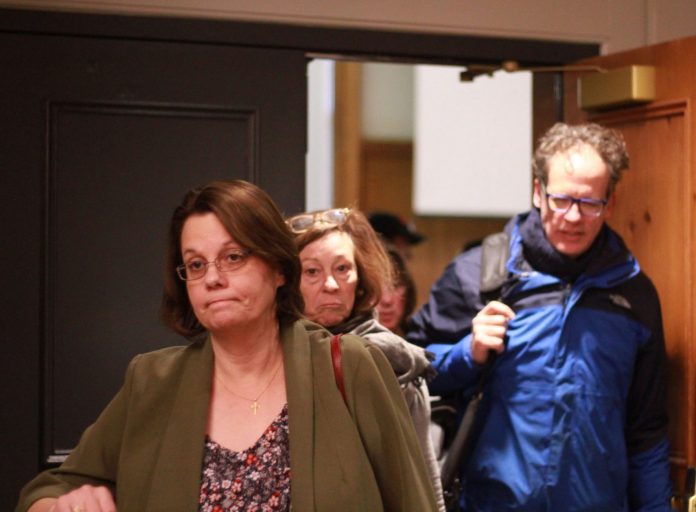 By Katie Hunger and Peter Nicieja

In what President Mark McCoy says is an effort to reduce its debt, DePauw University will eliminate 56 full and part-time staff positions and offer buyouts to eligible full professors. Staff will remain in their current positions until June 30, and retirements will not be effective until the end of the 2019-20 school year.

President Mark McCoy and Kathy Vrabeck, chair of the Board of Trustees, made the announcement in separate faculty and staff meetings Tuesday.

The layoffs, affecting nearly 12 percent of staff, will save the university $4.3 million a year, according to Bob Leonard, vice president of finance. He added that the university will make a one-time withdrawal from the endowment of $2.5 million to pay for severance packages.

Many of the staff remaining on campus after the announcement was made declined to comment. However, Jonathan Nichols-Pethick, director of the Pulliam Center, said, “This is a really, really devastating outcome. The tone is hopeful that we can pull out of this, and this is a necessary move, but I don’t think everybody’s feeling that it is helpful.”

Matthew Beekley, associate professor of kinesiology said, “I feel sadness. These are some of our friends. They’re spouses and parents. I’m just bummed. This is happening with higher-ed in general, however.”

When the board of trustees met in August to discuss the priorities for the year, they learned from Leonard that the university was projected to operate at a deficit of $5 to 6.5 million a year, said Vrabeck. As a result, the administration launched a benchmarking process that looked at other liberal arts institutions similar to DePauw to determine how they could save money.

When the Board of Trustees reviewed the results of the benchmarking at their January meeting, they learned that DePauw had, on average, 125 more staff members than other similar college and universities had, said Vrabeck.

DePauw’s current debt is $110 million, according to numbers shared at a Feb. 4 faculty meeting. Despite this number, DePauw’s campus will undergo several capital improvements in the coming years, including renovations to first-year residence halls, Roy O. West Library, and upperclassmen living units as well as the construction of new first-year residences, according to Leonard. Funding for these projects will either come from fundraising, withdrawing from the endowment, borrowing, or a combination of methods.

This is the second time the university has offered buyouts in the past three years. In 2017, nine  faculty and 35 staff took a buyout, 12 of which were from Facilities Management.

When discussing the reason for layoffs now, McCoy said, “We’re doing this now from a position of strength, so we can provide these robust packages to those affected.”

Faculty members whose age plus years of service equal 65 are eligible to retire and will be offered two years’ salary, following the completion of the 2019-20 academic year. Staff members will be given two weeks of salary for every year of employment. Full-time staff members will receive a minimum of six months pay, but could receive more depending on years of service.

In an interview with WGRE after the faculty meeting, McCoy said, “If the faculty accept the buyout and move to early retirement in the way that we expect, then this would balance the budget within two years.”

Conner Gordon, a 2016 DePauw graduate, calls the layoffs a “slap in the face.”

He said that his younger brother, who is currently a senior in high school, was considering attending DePauw. “Even after having an amazing experience as a DePauw student, I had to tell him to look elsewhere because of the poor leadership of the university. If that's a position the administration is putting its alumni in, it's about time alumni start asking whether the administration really has DePauw's best interests at heart.”

Ken Owen, a 1982 graduate and currently, special advisor to the president, is on the list of staff members who will lose their jobs. “When I left television to take this job 19 years ago, I did it in the hopes that I could make my alma mater–a place I love–more vibrant and help to build an even better future for the college.”

“These are tough times for colleges like DePauw; I recognize the need for tough choices to navigate these difficult headwinds. But I still hurt for many of the co-workers I call friends.”