While it wasn’t a win, DePauw kept a capacity crowd on edge throughout the entirety of Saturday’s game against a Loras College team in what would result in a 2-2 tie.

The DuHawks proved to be a worthy opponent for the Tigers, as the program came into the matchup with a 5-2 record, something senior forward Stephanie Martin thinks should never distract the team.

“Our mindset going into the game doesn’t rely on the opposing team’s record,” said Martin. “We went into the game as we always do, knowing if we played our game we would be just fine.”

The Tigers began the game in control, with Martin netting her fourth goal of the season with just over 10 minutes into the first half to give the Tigers a 1-0 lead.

Loras answered quickly, with goals from senior forward Katie Truesdale and sophomore forward Maura Walsh before the game had even reached the 30th minute to put the Tigers down 2-1.
That would remain the score until late in the second half, when freshman midfielder Katie Webb scored her second goal of the season in the 68th minute of play. 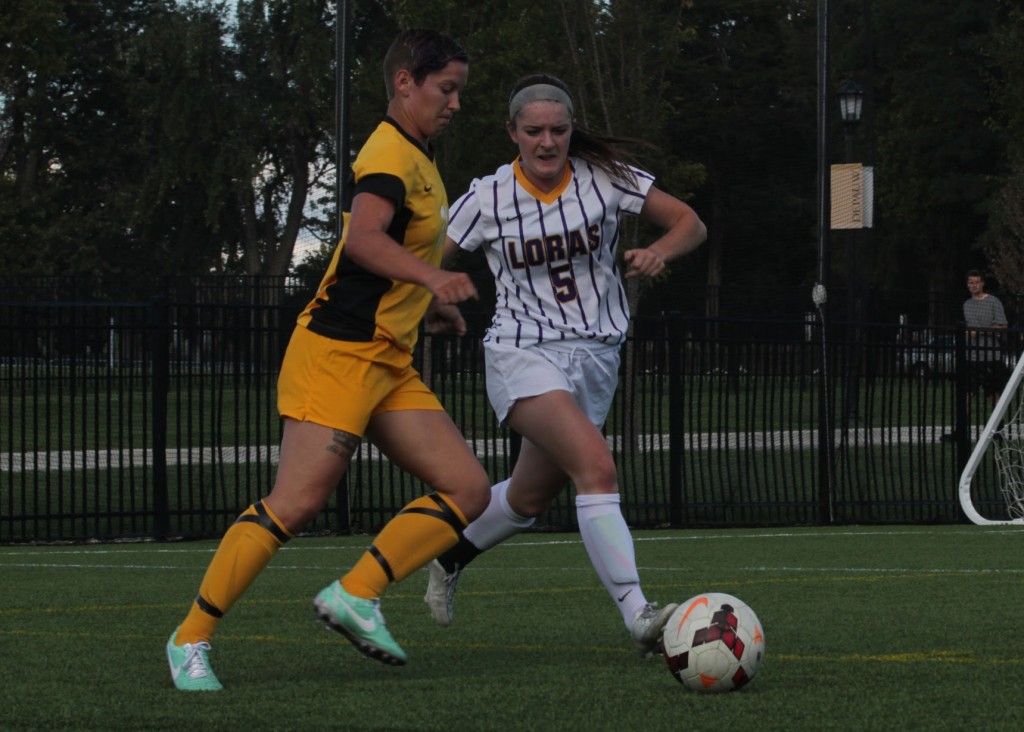 Senior Forward Stephanie Martin faces off against Loras Defender for possesion of the ball.
ZACH TAYLOR / THE DEPAUW

“As the game went on, we started to play their game and allow the to get back into it,” said Martin. “Even with being down… we still were confident in our abilities  to do what we needed to do which was score and get it to even grounds before working towards  our next one.”

“It definitively wasn’t our best game as a team, but I think we put in a lot of hard work and effort,” said Webb.

After going into double overtime, the game remained a tie, as neither team’s offense could put the game away in extra play.

“Physically, it was a very demanding game, and I thought our midfield and backline did well overall to respond,” said head coach Megan McCormick. “It was a good test for us to have to fight back to regain momentum, and I thought we created some really good chances in overtime.”

Despite the missed opportunities, the Tigers’ defense was held down by junior goalie Riley Riordan, who totaled four saves in the game.

Next Saturday’s home game against Oberlin College will be an important one, as it will provide the Tigers the opportunity of getting ahead in the NCAC conference standings with a win over the Yeowomen.