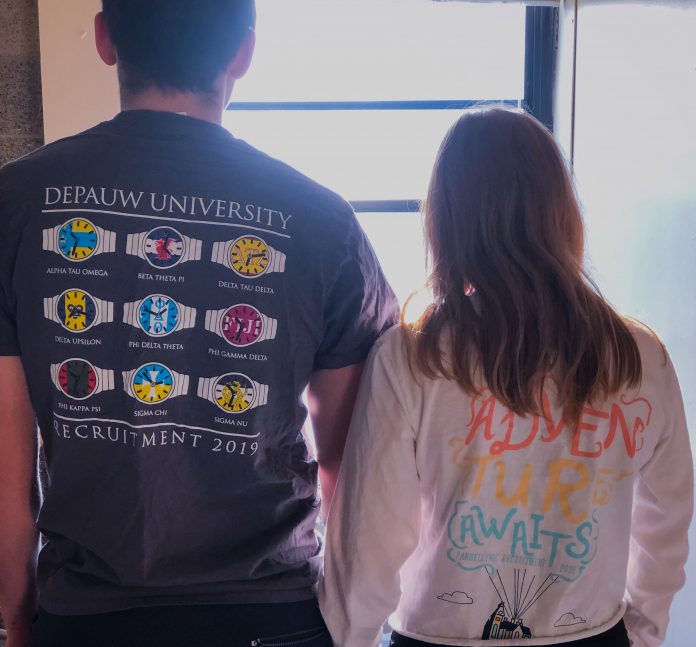 Earlier that week, an email was sent by Dean Harwood, Director of Fraternity and Sorority Life, to all fraternity presidents prohibiting alcohol and “Boulder Runs” during all new member activities because they could be considered hazing and “lead to a quick end to the chapter’s new member program.” A Boulder Run is a DePauw tradition where students streak to the Columbia Boulder by East College.

According to the DePauw Crime Log and Fire Log, two “Safe Community Call/Alcohol Violation - Minor in Consumption” activities resulted in transportation to the hospital. Both situations were forwarded to Community Standards.

“The bid night investigations are ongoing,” Myrna Hernandez, Dean of Students, wrote in an email today.

According to the new DePauw Fraternity and Sorority Life Scorecard located on DePauw University’s website, Phi Delta Theta is currently on probation with Community Standards. The expected resolution/timeline is March 2. Phi Kappa Psi has a “formal warning” from Community Standards with an expected resolution/timeline of Feb. 28. Beta Theta Pi is also on probation for unknown reasons.

It has been two weeks since Kappa Alpha Theta and Alpha Tau Omega went under interim suspension with DePauw University for an alcohol-related incident that occurred between the houses and led to the hospitalization of a student whose blood alcohol content was above 0.45. According to awarawakealive.org, blood alcohol above 0.45 is coma-inducing. The houses are still suspended, according to Hernandez.

This weekend, no fraternities will be allowed to host events. According to an email sent by Kevin Hamilton, Assistant Dean of Students, to fraternity and sorority presidents, DePauw “Fraternity and Sorority Life has received information indicating chapters may be planning chapter to chapter pairing of new members through a lock-in process or party,” which could be considered hazing. Chapters who have events anyways “may be issued a cease and desist of their new memberships process” and other charges and sanctions. According to DePauw University Handbook, “cease and desist denies a house of all organizational activities.”

This weekend is commonly known by Greek students as “Black Friday” because it is the first time new members of Greek houses go out with their organizations and often blackout from binge drinking. In past years, fraternities and sororities have been allowed to pair on Black Friday.

After meeting with DePauw Campus Living and Community Development (CLCD), junior Anna Pearson, Vice President of Chapter Relations & Standards at Alpha Chi Omega, sent an email tonight to all current members of Alpha Chi Omega concerning Black Friday. "The administration is looking into how to navigate future pairings as, spoiler alert, they had the wrong perception of what a pairing entails." She wrote the weekend's events have been canceled because "all but one" fraternity is under review and cannot host events. The DePauw Fraternity and Sorority Life Scorecard shows that more than one fraternity is in good standing with the university.

In regards to how houses will pair going forward, Pearson wrote, "this is also a process that may be changing (positively) in the future, but it is still tentative."