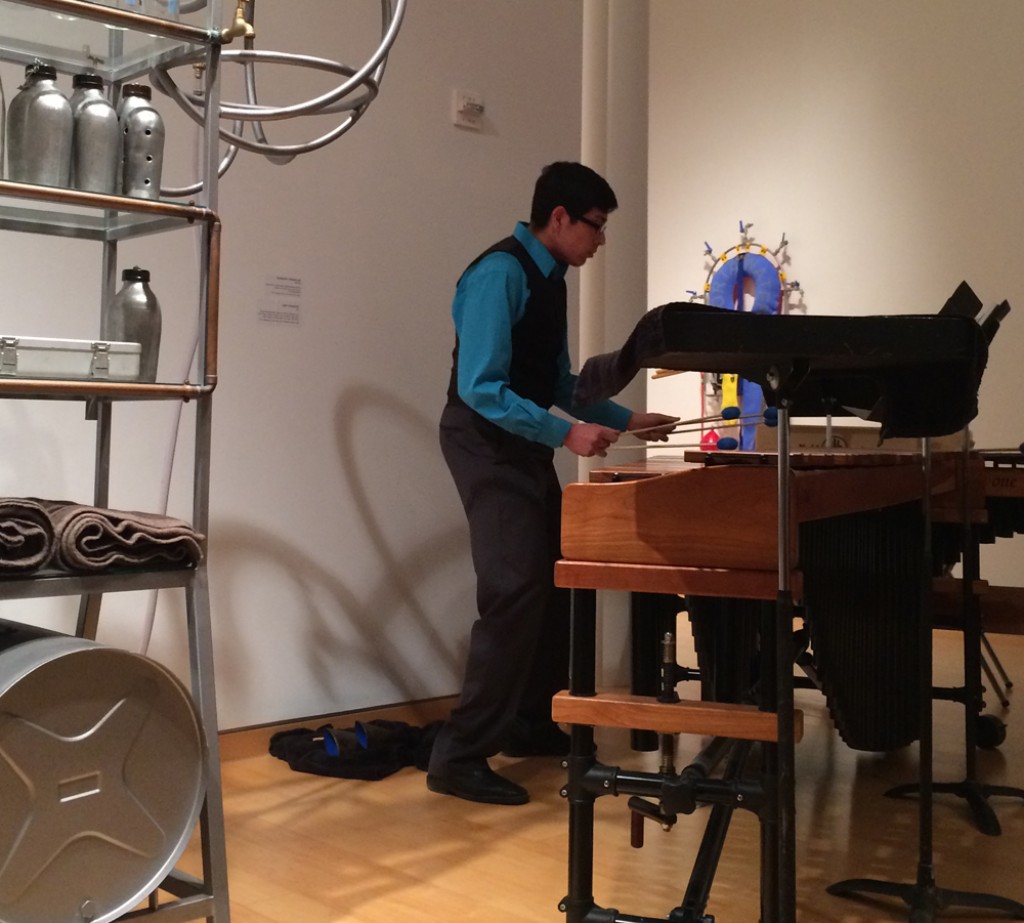 The percussion ensemble, comprised of students, performed in the
space utilizing not only instruments but various other items.
MARIA RUMMEL / THE DEPAUW

Art, in all forms, can be a powerful tool to spark discussion and thought on many issues that plague our world. When several art forms are combined, this can be a very influential experience that can resonate with audiences more than if just one medium is presented alone. That was the goal on Wednesday night as Percussion @ Peeler combined with the Lucy and Jorge Orta’s "FOOD+WATER+LIFE" exhibit to create awareness to some of the biggest problems in the 21st century.

"Sounds of FOOD+WATER+LIFE" was a performance that both captured your ears and your eyes. It took place in the middle of the Lucy and Jorge Orta exhibit, with the audience sitting on chairs among the artwork and the musicians moving around them. There were several, station-like areas set up with instruments and house-hold items that the musicians would move around to depending on the piece, creating a very tight atmosphere where the audience had to be turning around constantly as the performers would change positions.

There were seven areas scattered around the gallery that were designated performance spaces. There were traditional instruments such as marimbas, a gong and series of shakers and rattles, but there were also flower pots, glasses filled with water, ceramic plates and metal lamps.

There were four student percussionists and a guest flute performer, Eleanor Price. Their director, Bonnie Whiting, school of music percussionist and instructor, accompanied them. They descended from the second floor of the gallery and came in behind the audience performing a traditional samba reggae compilation before organizing themselves at their respective spots among the crowd.

Their performance was a combination of percussion and spoken word elements. Composers wrote some of these pieces and some of them were taken from quotes of environmentalists, conservationists and different texts from faiths such as Islam and the Old and New Testament.

“First we came and looked at the exhibit,” Whiting said. “We were inspired to program pieces that fit with the theme of food, water and life and how we conserve and share those things.”

Whiting participated along with her fellow students, even performing a solo piece titled “To The Earth” which was composed by Frederic Rzewski. She kneeled on a table and tapped on flower pots of varying sizes with pencils as if she was at a drum set.

In the piece “Living Room Music” the four members of the percussion ensemble (sophomore Zachary Jacobs, first year Salvador Rodriguez, first year Zachary Suchanek and first year Mariah Taller) sat around a small table and drummed on ceramic plates and glasses. They then did a round table acapella style piece.

The acoustics of the Peeler gallery were fantastic for this type of performance, as the sound bounced around the room, making it truly a special experience for all who were present.

“The performance was very different, I wasn’t expecting it,” first-year Ryan Grizzard said. “But it was very unique and I liked it a lot.”

Peeler creates an interesting musical experience not just for the audience but for the musicians as well.

“Its fun to get out of the GCPA,” Taller said. “That’s my favorite part.”

Jacobs agreed and thought that it provided an experience much different than being on the stage in Kresge.

“I like the fact that you can orient it to something you see,” Jacobs said. “Where as if we were on the stage at Kresge, you just see these instruments and they aren’t connected in anyway where as in Peeler you get the art experience as well.”

Whiting was proud of the work her students put in to contribute to the event.

“The percussion ensemble worked really hard to prepare those pieces,” Whiting said. “The students did all the hard work of performing it and putting it together.”

Percussion @ Peeler once again brought joy to the audience and the performers. These musicians' hard work really paid off and reaffirmed Percussion @ Peeler's status as one of the best Peeler Art Center and School of Music events of the year.