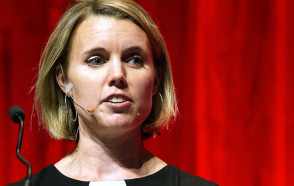 The current academic queen of star studies is coming to DePauw on April 5 at 8 p.m. in the U.B. Ballroom. Her name is Anne Helen Petersen.

Whether it be Armie Hammer (“Call Me By Your Name”), Justin Timberlake (“Trolls”), or Jennifer Lawrence (“The Hunger Games”), Petersen has probably analyzed their star image and people’s everyday engagement with them on a site familiar to many: Buzzfeed.

“I wish I was a person, who when I was a teenager, was obsessed (with stars and celebrities) because that would be a better story,” said Petersen. “But, I think I liked them the way that many people liked them on a regular basis.” After one week of discussing star studies in her undergraduate career, she fell in love with examining stardom, specifically the work of theorist Richard Dyer.

“What he [Dyer] did was give language and theory to a different way of understanding why stars become stars,” said Petersen. “The way that he unlocked the string between stars and ideology and the world around us just clicked, I loved it.” As she pursued higher education further, she began blogging and gained a following by using Dyer’s tools to analyze celebrity gossip sources like Perez Hilton.

After getting her Phd in stars and the gossip industry, Petersen was hired by Buzzfeed to write critical analysis as a culture writer. Her dissertation turned into the book “Scandals of Classic Hollywood: Sex, Deviance, and Drama from the Golden Age of American Cinema,” which is a historical and cultural account of the “star” since its construction in the early 1910s, and stars’ subsequent “scandals.”

Petersen’s favorite research has been on star Jennifer Lawrence. “She’s the gift that keeps giving...she is one of the few major stars that are remaining,” said Petersen. “There are a whole lot of ideologies and feelings around her and people feel strongly about her.” Petersen has created a canon on Lawrence.

Petersen has since expanded her work to more than stars and celebrity gossip. She covers a variety of topics in film, politics, and even culture in the North West, where she’s from originally. Her most recent claim to internet fame is her article analyzing Armie Hammer’s career and, as rumor has it, is the main reason he deleted his Twitter account.

Rawlins helped bring Petersen to campus to teach students about the connections between scholarship and gossip. “I think the discussion of [her paper] ‘Gossip Grrrl’ was really useful for students in helping them wrestle gossip away from patriarchal frameworks that dismiss and demean it,” said Rawlins. “Petersen’s conversations with students really helped them to map out the complexities of gossip.”

Senior Kate Whalley attended Petersen’s talk and was a part of one of her class discussions as a sophomore. “As an avid Buzzfeed reader, I loved her analysis of the ‘nasty woman’ [in her book] and her use of a clip from ‘Broad City,’” said Whalley. “The way she writes about celeb[rity] culture in an academic style is so refreshing.”

Director of the Pulliam Center for Contemporary Media (PCCM) Jonathan Nichols-Pethick followed Petersen’s work early on in her career and has since remained a colleague of hers in academia. “On my first day on the job, I wrote a list of people that I wanted to bring to DePauw and she was one of them,” said Nichols-Pethick. “Her discussion in Watson forum was packed--it was standing room only, and at that point I knew she was someone special.”

Petersen’s work is unique in that it merges film and media studies and mainstream readership. Her analyses of stars are accessible to everyone outside of academia and effectively teach us how stars are a construction of our nation’s ideals and ideologies.

Petersen is coming to DePauw as the keynote for the Communications and Theatre Department’s National Undergraduate Honors Conference on April 5 at 8 p.m. in the U.B. Ballroom.