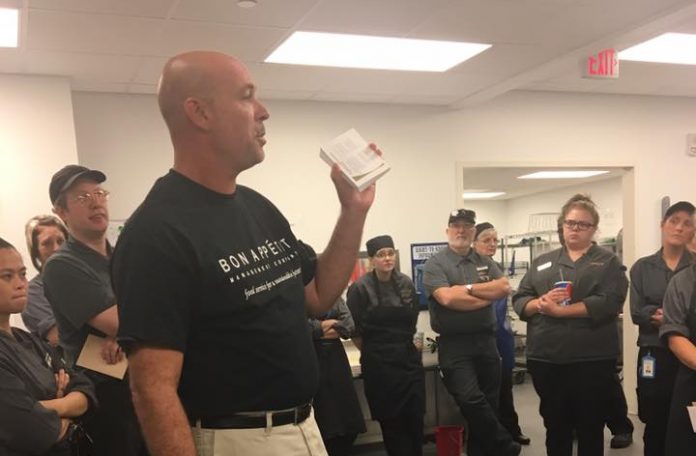 Bon Appétit provides DePauw with one thing that powers students through the stressors of college: food. But to provide food on campus, a lot of things happen behind the scenes that students don't know about.

John Hecko, general manager of Bon Appétit at DePauw, said he tries to run the company like an organism by sharing culture and community in order to forge relationships with the students and the community.

Though he has worked in food service for over 30 years, Hecko began at Bon Appétit five years ago. His wife, Amber Hecko, works as the assistant director of the Environmental Fellows program. Working at Bon Appétit enabled Hecko to work with his spouse in a community while also helping young people.

“Every time I see a student walk into Hoover or stop at Café Roy for a cup of coffee, it makes me immensely proud to see the conversation that students engage in with our employees,” Hecko said.

Hecko's main focus at the company is to build a culture of positive standards where each person is treated well and respects each other. For Hecko, management is an essential piece of keeping Bon Appétit running smoothly.

Bon Appétit is also very aware of the consequences its actions might bring to the environment. It has a farm to fork policy, which means 35% of whatever is served at Hoover comes from the Ullem Campus Farm (as opposed to 14% three years ago).

Most of its food suppliers come from within 150 miles of DePauw, reducing carbon footprint and demonstrating a healthy relationship with nearby farms. Its strong sustainability efforts only reinforce it’s long term goals of community support and local partnerships.

In order to make Bon Appétit a stronger presence on campus and raise awareness of what it does, Hecko is working on an initiative to engage college students through campus-wide food stations. These students will be known as Bon Appétit Ambassadors and will be compensated.