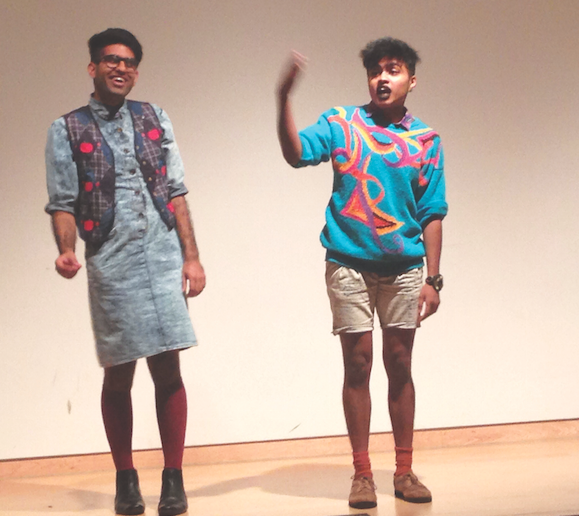 After a short introduction, they started to get into the beginning of their show. Balasubramanian started the night off with, “Okay everyone, let out your most passionate moan you’ve ever done in public." A reluctant audience followed suit and started to moan with the duo. After a good 30 seconds of moaning, the duo prepared theselves to recite their poems. The first few were mellow and calm, exciting the audience with their spoken words.

In a dramatic shift in the mood the duo started talking about their experiences at Stanford University and how that inevitably led to where they are now. “We thought we were going to be learning, but we had to teach others,” Vaid-Menon said in reference to their gender and identity. In their discussion of universities, it became clear that they are not a fan of organized higher education, calling it an institute to repress emotional intelligence. Finally the duo eluded to “messy” things happening at DePauw, though they opted not to elaborate.

After these statements, it began to be clear that the poems they were about to read were going to be extremely radical. As the duo started reciting their poems the audience felt shocked and speechless. In an intensive effort to bring their viewpoints to DePauw students, the duo took on everything from colonialism to fair trade coffee.

Some audience members were offended by their words.

“The heat of the room was nothing compared to the anger and discomfort I felt coming from the poets,” said freshmen Emily Koch.

The poets were sharing much about colonialism, with everything leading back to being “the white man’s fault.” The farther into the two hour show it began to seem one sided. Balasubramanian and Vaid-Menon went as far as saying “the US isn’t here to protect us, its here to kill us.” Finishing off with “God Bless America is a corporate slogan, therefore God Brown America.”

In an extreme shift, however, everything went back to being enjoyable and light-hearted

“I like that this space made people uncomfortable, it makes you question why you were so uncomfortable,” said junior Asucena Lopez, one of the women who helped to put the program together.

There were a lot of mixed feelings about what was said in the performance and about Darkmatter as a whole. It certainly was an unforgettable yet enraging show, the main highlight of the night being Balsaubramanian’s fabulous lipstick.