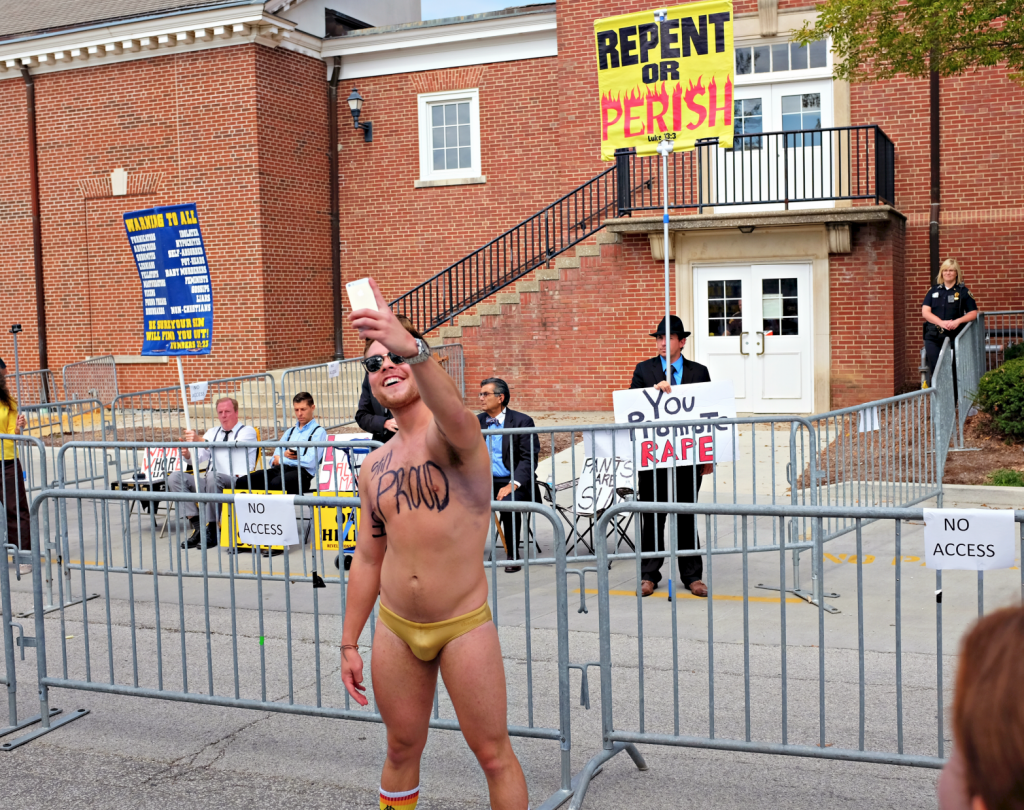 Senior Andrew Petersen takes a selfie in front of representatives from The Campus Ministry
USA with “still proud” written in Sharpie across his chest.
PHOTO COURTESY OF SARAH BURTENSHAW

Students and administrators danced provocatively in the streets. Music blasted over speakers, and a condom-turned-balloon bounced through the crowd as if it were a beach ball.

To an innocent by-passer, it might have looked as if DePauw University held one large block party, but behind the students and event gates on Hanna Street was Brother Jed Smock and company “sidewalk preaching,” which some students call protesting.

Smock and his group, The Campus Ministry USA, call themselves “confrontational evangelical Christians,” and their visit Wednesday wasn’t their first time “preaching” at DePauw. The group came to campus on Sept. 23, though their website said they were supposed to be at Indiana University, Purdue University Indianapolis that day.

The group’s first visit resulted in local police shutting down the intersection of Hanna and Locust Streets. During their visit, sophomore Avery Nash and the Assistant Director of Alumni Engagement, Andrew Smith ‘11, were pinned to the ground by local law enforcement. Conversations and unrest relating to race and privilege once again surfaced on campus.

This time, though, the university was prepared for their presence.

DePauw’s Public Safety created a double barricade with a buffer zone, in which neither the protesters nor students were allowed to enter. Ahead of time they asked Smock and his group to set up shop south of the Union Building in a location that allowed them to be ushered to a safer place should violence ensue. This placement allowed administrators and campus officials to handle the situation without calling for backup from local law enforcement.

“They’re in a cage, so it's kind of like a zoo, which is almost better,” first-year Tony Henning said. “There was a lot of just like ‘just ignore it’ stuff on social media which kind of pisses me off because I’m allowed to be as angry as I want to be.”

Amid the various responses, overall, students were also more prepared for their visit.

Code Teal table set up one table and handed out consent cookies, meaning that students have to ask for the cookie, as they would have to ask consent and another table was to raise money to support groups affected by Smock’s presence. The donation table was organized by senior Christine Betterman, an idea historically used against the Ku Klux Klan.

“The message is that it’s their choice to be here," Betterman said, "but until they leave this campus we will continue to raise money, not necessarily in their name but because of them for our community.".

The table ended up raising approximately $2,700 throughout the five and a half hour visit from Smock. An online fundraiser has been left open to continue support for these groups.

Christopher Wells, vice president of student life, pledged $1 a minute up to a $300 maximum.

“These students are showing we can turn hate into positive social change, and I have to support that,” Wells said.

The environment as a whole was different than that of a week ago. Students counter-protested and heckled the group, laughing at their message.

Students made-out in front of the protesters, and senior Andrew Petersen twerked in his underwear with “still proud” written on his chest.

First-year Arman Nazari held up a sign that read “If you want to talk about Jesus I’m here, also free hugs.”

“Hate will never compel people to love God,” Nazari said. “We’re loving them, and we’re having a great time. We’re fighting hate with love, and that’s the best thing we can do.”

Whenever a song with well-known dance moves, such as “Wobble” or the “Cha Cha Slide,” was played, students stopped yelling at Smock and his group to dance in front of them.

“Brother Jed, no one is listening right now,” senior CJ Cazee shouted when “Cupid Shuffle” came on. “We’re dancing. Give us a sec.”

“I am ashamed to be a Christian because of you,” Gandy shouted before merging back into the crowd.

The shouts from Smock’s group increasingly started to upset students.

Faculty and staff formed a human barrier around the outermost barricade every time student tempers flared.

Sophomore Maggie Paxton removed her shirt and had black duck tape and unopened packages of condoms taped to cover her nipples.

“My message wasn’t going to get across if my shirt wasn’t off,” Paxton said.

In response to Paxton going shirtless, Savenko implied that she deserved rape.

“You’re asking for trouble,” Smock said. “These boys, as evidenced today, have very little self control.”

He related it to leaving your keys in a new car in a high crime area because they are “provoking it.”

Smock said the reason the group returned this week was because they felt their message was interrupted last week.

“We want to judge right from wrong,” Smock said. “We’re holding up the Bible like it’s a mirror. We’re showing them tough love.”

Smock said the search for another station to pick up his reality TV show “The Book of Jed,” which had a pilot commissioned by Country Music Television, and the large amount of media attention generated by his first visit to DePauw had no factoring in his decision to return.

He also said he doesn’t come to incite violence and fuel anger.

“If that would have been the case, I would not have been working with the police today and trying to cooperate with them,” Smock said. “It’s rare for students to get violent. Occasionally it does happen. I’ve never sued anyone.”

Though he does not know when he will next visit DePauw, he intends to come back and to continue working with Public Safety to have a similar setup.

“We haven’t set a date yet,” Smock said, “but I intend to put DePauw on my preaching list.”

Moving forward, the university intends to continue the conversations that were started after Smock’s first visit.

“We are working to address the concerns of safety,” said Renee Madison, senior advisor to the president for diversity and compliance, “but it is still really important that students communicate specific requests or ways that they think that the university and the administration can enhance its safety and security.”

-Madison Dudley contributed to this article.