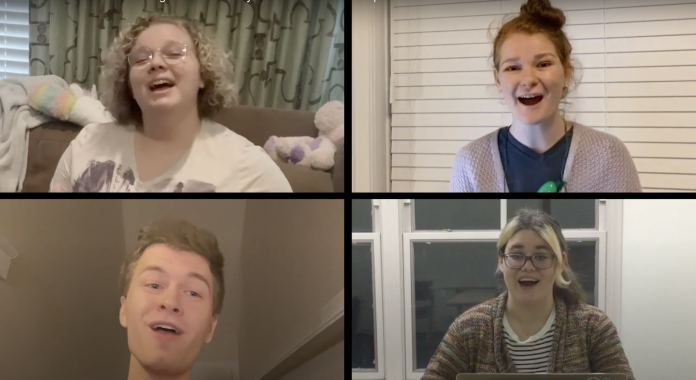 People from all over tuned in from their homes to view the premiere of the second installment of the virtual musical “Edges of Proximity: Songs for the Pandemic” presented by the DePauw Theater and School of Music. Once again students and faculty came together to put on a show using selections from “Edges” by Benj Pasek and Justin Paul and “Theory of Relativity” by Neil Bartram.

Part two’s focus was on relationships, “both the problems and the wonderfulness,” director Tim Good said. Five different songs were performed along with one monologue, ranging from topics such as connecting with friends on Facebook after experiencing loneliness, to being finally open to being loved, to losing a high-school love and learning a painful lesson.

The musical opened with a solo sung by Junior Abby Brodnick titled “Man of my Dreams.” The song is about a young woman who has finally found the love of her life.

Brodnick said that what she liked most about this performance was “learning this song and discovering the nuances about my character, as well as figuring out certain lyrics in the song that could develop into humorous moments.”

Because the musical was completely virtual due to the pandemic, rehearsals were held via zoom. The students got the opportunity to meet individually with a vocal coach, accompanist, music director and theatre director to cover each part of the production process and perfect their piece before their final recording.

Brodnick said, “I've enjoyed getting to work privately with my directors and focus on how to personally become a stronger, more responsible and self-directed musician.”

It goes without saying that there were challenges as this production was different from anything the students and staff had done before. Good and Brodnick both agreed that it was not the same not being in the theatre altogether.

“Theatre is a communal experience, and we were denied that part of the experience, much like the rest of the world at this time,” Good said, “Normally, we would get to see and share our work with each other over many rehearsals, but this time, the actors didn't see each others' work until they saw the final video. We were also denied the energy and interchange with a live audience, which is an indispensable aspect of live performance. “

Brodnick said, “The absence of constant cast meetings and group rehearsals has certainly changed the dynamic of the musical production. A lot of bonding with cast members and fun backstage memories are often created during those long rehearsals.”

However, Brodnick stated a positive of this situation is that she has had more time to spend focusing on her personal choices and roles in acting.

Even with these challenges, Good is proud of how his students have handled them. “The students have adapted quickly and well to our new reality. Our 5-person production team worked very well together, keeping good communication so that when new ideas and problems came up, we were able to work with those surprises easily,” Good said.

The magic of the performance still shines through, even if it’s from a screen. The cast and crew created a beautiful piece of art during these trying times. Check out the two parts that have premiered on DePauw School of Music’s YouTube and stay tuned for part three coming soon.