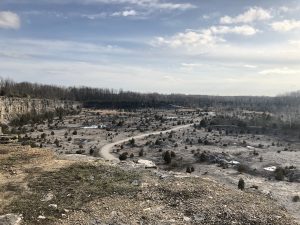 *This story has been updated*

Three Greencastle High School students have been accused of the April 16 racial bias incident in the Nature Park, according to Putnam County Prosecutor Tim Bookwalter.

The n-word was found spelled out in the nature park and reported to Public Safety, who led the investigation and found the perpetrators because of a tip said Director of Public Safety Charlene Shrewsbury.

The Prosecutor’s Office is currently conducting a follow-up investigation in an attempt to find a crime committed by the perpetrators. However, it is unknown at the moment if they committed a crime.

“It’s hard to find something that fits. We have to find a crime that fits a set of facts,” Bookwalter said, adding that he does not believe DePauw Public Safety thinks there was a crime committed.

Bookwalter said that both Public Safety and himself believe that this case is not related to the other bias incidents that have occurred at DePauw over the past month.

“You know where the nature park is, it’s on the other side of town,” Bookwalter said. “It’s easier access for these kids than a building on campus.”

Shrewbury sent an email to DePauw faculty, staff and students at 4:00 p.m. on Monday saying that the perpetrators were caught and Public Safety had concluded their investigation.

The alleged perpetrators’ names cannot be released because they are juveniles. The juveniles have been issued a no trespass order and the case have been turned over to the Putnam County Prosecutor’s Office.

Bookwalter said that if a crime was committed, there is a chance that is was criminal mischief for vandalism. According to the Indiana Code 35-43-1-2, vandalism is described as “a person who recklessly, knowingly, or intentionally damages or defaces property of another person without the other person’s consent commits criminal mischief.”

Despite being one of four states without a hate crime statute, Indiana law enforcement agencies are required to report such acts to the Indiana State Police. The last reported data was for the year of 2016, which reported the highest number of hate crimes since 2010. The most common type of hate crime targeted black people, as there were 35 hate crimes reported against black people. The next highest was 13 against people for their sexual orientation.

There have been an additional five bias incidents that are still under investigation by Public Safety. “I wish I was closer than what I am. I think to help get those cases solved is I need a tip, I need a lead, I don’t even care if it is anonymous,” Shrewsbury said.

Some ways that students can report any information is through the Silent Witness Form found on Public Safety’s website, Campus Eye app found in app stores, or call Public Safety anonymously at 765-658-5555.

Shrewsbury said that someone knows something and in order to solve the cases she needs them to come forward. “I need it to weigh heavy on their heart I need them to come and give someone the information so that we can get this solved and have some form of resolution, it’s not going to be resolved,” Shrewsbury said,  “this is going to be ongoing for a while because we have all been affected deeply.”