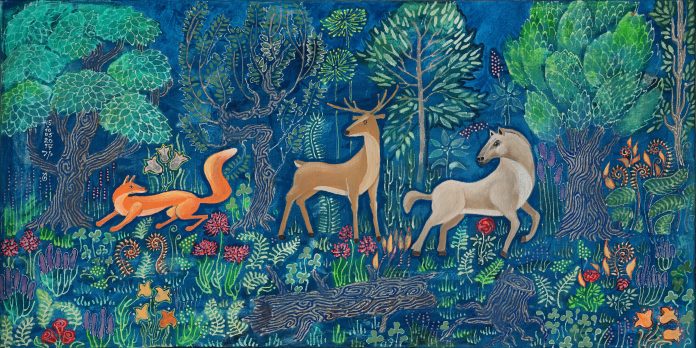 With the seasonal Netflix recommendations and annual reruns of Halloween classics, I doubt you have a shortage of entertainment for your spooky season. Everyone returns to a favorite on movie nights this time of year and I usually find that my list is too long to finish, and only grows each year. My honorable mentions for best fall entertainment include stop-motion classics like “Coraline”, “ParaNorman”, “The Nightmare Before Christmas”, “Fantastic Mr. Fox,” and Mike Flanagan’s horror series on Netflix—“The Haunting of Hill House” and “The Haunting of Bly Manor.” Despite these endless options, though, one quiet little animated series always comes out at the top of my watchlist.

“Over the Garden Wall” is an animated miniseries that aired on Cartoon Network in November 2014. The series follows two half-brothers who find themselves lost in the middle of a dark forest with no memory of how they got there. A glowing half-moon looms above them. The older brother, Wirt, rambles on about his anxiety and how urgent it is that they find a way out of the wood. “Though I am lost,” he muses, “my wounded heart resides back home, in pieces, strewn about the graveyard of my lost love.” Wirt demonstrates a unique yet familiar brand of teenage angst, attempting to act as the mature one as he sizes up the alarming nature of their situation while peppering his speech with lines of improvised poetry. The younger sibling, Greg, wears a teapot on his head, carries a large unnamed bullfrog, and leaves a trail of candy dug out of his pants as they wander. Greg provides the show with comic relief and represents childhood innocence. The overarching conflict is that they need to get out of the wood safely, avoiding the Beast, whom an old woodsman warns them about in the first episode, saying, “welcome to the unknown, boys. You’re more lost than you realize,” as he wields his ominous flaming lantern. As the episodes lead into each other, sometimes with little transition, Wirt and Greg venture further into the wood and encounter increasingly bizarre, charming, and threatening characters living there.

With only 10 episodes (excluding the pilot episode released a year earlier) and 11 minutes to each episode, the series didn’t take up much room in the TV schedule. The short duration of the series makes it extremely bingeable, especially given the way suspense builds episode by episode. However, I would also advocate for a slower watch so that you can appreciate all the little details the show has to offer. Despite the small amount of time it took up, it immediately gained a loyal audience and was well-received by critics, receiving an Emmy for the outstanding animated program the following year. The show was created and written by Patrick McHale, who had previously worked as a writer and creative director on “Adventure Time” and other Cartoon Network programs. Considering “Over the Garden Wall” was his debut as a creator, the show’s success is especially remarkable, and it stands out as a triumph of creativity and originality.

“Over the Garden Wall” draws influences from a number of different aesthetics and eras of television. The animation style is reminiscent of classic American cartoons from the 1930s and ‘40s, while some episodes mimic the pacing and humor of a 1980s sitcom. The storytelling draws from elements of American folktales (think “Sleepy Hollow”) as well as classic fairytale tropes: two orphan-like children lost in the woods, a talking animal offering them a favor, a beast roaming about, and the general aura of a ghost story. The design of the background characters comes from a myriad of historical time periods, all charmingly and fascinatingly animated. For example, the third episode features a late 19th-century schoolteacher who lectures a schoolhouse full of dapperly-dressed farm and woodland animals. Another episode introduces a tavern full of characters who all identify themselves by occupations in the medieval period such as the tavern keeper, the butcher, the toymaker, and the unforgettable Highwayman. It’s as if the Unknown is a place frozen in time and the series takes on an atmosphere of affectionate nostalgia for the styles of days gone by.

The quirky characters and humorous subplots mark a contrast to the darker and more ominous tone the show can also take on. Some scenes feel like they come straight out of a horror movie or gothic tale. The show reaches a heart-wrenching climax, although I can’t give that much away. “Over the Garden Wall” represents a perfect example of how children’s media, especially animation, can strike such a satisfying balance between light and dark, between brevity and seriously heavy themes. The perfect execution of this dynamic makes the series truly suitable for all ages. The charming characters, a riveting storyline, and a whimsical setting combined with the show’s memorable soundtrack by the Blasting Company, and gorgeous painted backgrounds make “Over the Garden Wall” an unforgettable masterpiece. Go check it out! If you want to go the extra mile, watch the show’s pilot episode, “Tome of the Unknown” on YouTube.