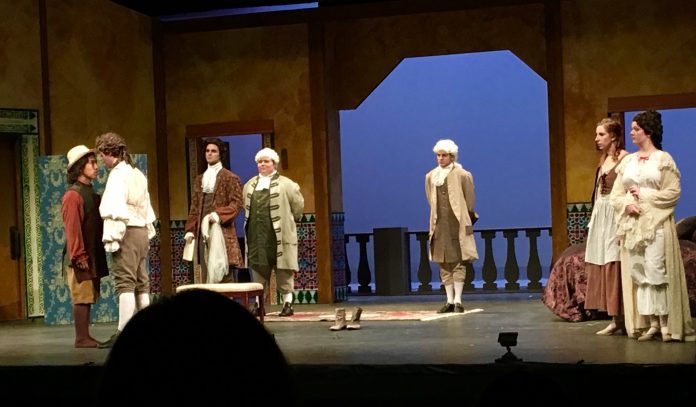 “Le Nozze di Figaro” dazzled audiences with a stellar and hilarious performance. The two-act comic opera ran from March 1 to March 4 in the Green Center of Performing Arts’ Moore Theater. The entire show was performed in Italian with English subtitles appearing at the top of the stage.

The show had a large turnout for a student-run production. The atmosphere in the room was light and humorous, as the content of the opera was very comedic. The English subtitles sometimes delayed laughter after a comical moment happened on stage, but this only added to the hilarity. The actors were phenomenal in accommodating the comedic timing to the audience’s needs. Jon Kroger, a cast member, said Saturday night’s show had the second largest crowd the opera has drawn in the past five years.

The DePauw School of Music website describes the show as being full of “shameful plots, mistaken identity, humorous coincidences and guilt-ridden confessions.” All of this and more happened during the action-packed show, especially since the show takes place over the course of one day.

The opera had a total of two casts: one set of principal leads for the Thursday and Saturday performances and another set for Friday and Sunday. The ensemble performed at all four shows. Unfortunately, one of the actors who played the Count, John Cotton, tried to power through the flu and perform, but had to tap out to his respective cast member, David T. Mather, on Saturday.

Props mistress Alex Gandy testified in support of the two-cast method, arguing that the arrangement protects against unforeseen roadblocks like the flu. She said that it also helps the music students gain experience as principal performers.

“The students that are in the opera are music students and they come here to get an education,” Gandy said. “By having two casts, you extend the number of people who learn what it’s like to be a principal singer in an opera.”

Ensemble member Jonathan Kroger mentioned that it almost felt as if the ensemble was double cast as well as the leads. He said, “Even though half of the cast stayed the same, they became two very different shows. It was more than just a change in the cast, it was a change in the show’s entire dynamic.”

With auditions taking place in October of last semester and infrequent rehearsals beginning in November, the opera did not have a long time to take shape. “For every single minute of stage time in this three and a half hour opera, an hour of rehearsal went into it,” Gandy said.

Usual rehearsals––that is, rehearsals outside of production week––for ensemble members averaged around 15 hours per week, and leads put in around 30 to 40 hours per week. The show was certainly a labor of love that every student should share.