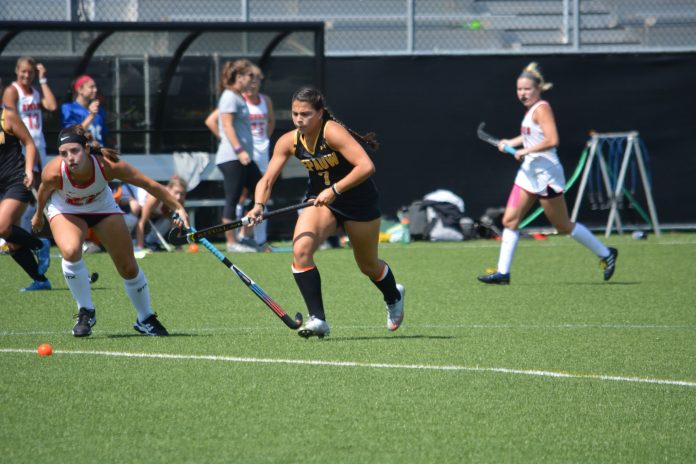 Thomas explained that she started playing field hockey in high school on a whim. “Once I got involved outside of high school with clubs and training, that’s when I became very interested in the sport” Thomas said. Thomas continued playing in college at Elmira College in New York.

“I moved into coaching because I knew that I didn’t want to give [Field Hockey] up out of college,” Thomas said. Thomas initially worked at DePauw as a Graduate Assistant for a year before spending the next three years at Ohio Wesleyan University. “When the job opened up [at Depauw] I was not expecting it and knew I needed to go for it,” Thomas said.

In reference to her new colleague, Thomas touted Mills’ knowledge of Field Hockey and her impressive history with the sport: “She has tremendous background for playing,” Thomas said, adding that Mills has contributed astronomically to the team.

Mills was first exposed to the sport by her dad. She got her first stick in fifth grade and started playing competitively in eighth grade. Her passion for field hockey followed her to college and she played at Franklin and Marshall College in Pennsylvania. From there, she began coaching.

Mills initially worked at McDaniel College in Maryland as a Graduate Assistant. A position facilitated through the help of her college coach. “I got into coaching because I coached during the summers when I was in school and I really just enjoyed it,” Mills said.

When asked about her colleague, Mills described Thomas as organized and competitive. “She’s really fun,” Mills said. “I’ve definitely enjoyed getting to know her… [Thomas] just wants the best for the individuals on the team and the program as a whole”.

A unique aspect of the hiring of the new head coach was that players were given the chance to weigh in significantly. “We met with AD Stevie Baker Watson and she sat down with us and asked us what we were looking for in a coach,” Senior Sarah Foye said.

The players also got to test the three prospective head coaches’ training styles prior to their interviews. “They ran us through a couple drills just so we could get a feel for their style” Foye said.

Thomas was selected by DePauw athletics. Thomas then hired Mills as her assistant. “I really like them both,” Foye said. “They both get along really well.”

Foye added that while she was a senior in high school, Thomas was a Graduate Assistant at DePauw and that Thomas played an active role in her recruitment process.

When asked about the team’s upcoming season Thomas said: I have no doubt that they are going to exceed my expectations.” Coach Mills added saying: “I think there’s amazing potential”.

Following her coaches enthusiasm for this upcoming season, Foye also has high hopes. “[I want] to go do really well in conference,” Foye said. Foyes goal is for the team to play in the NCAA tournament and “become champions once again”.

With a fresh new coaching staff and a team that got to help choose it, DePauw Field Hockey appears poised for future success and possesses a close relationship between athletes and coaches. Foye put it simply: “I think everybody really likes them”.