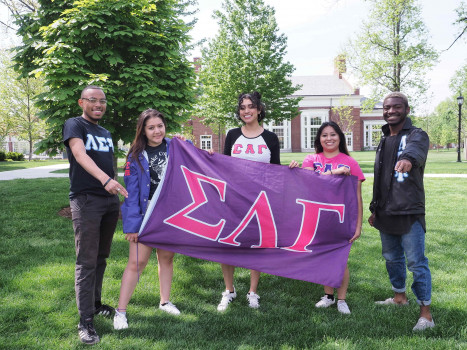 Even though MGC and NPHC organizations do not require housing, some chapters on DePauw’s campus do have University-owned houses. Antoinette Gibson, current junior and member of Alpha Kappa Alpha Sorority Incorporated, wishes that the University would make more efforts to recognize these organizations in the same way it does other councils.

Although appreciative to have on-campus housing, Gibson said “I just don’t think we get the recognition we deserve.”

Even though she is not completely sure why the MGC and NPHC organizations are not highlighted on the map, Danielle Ford, the MGC and NPHC advisor, said, “I would think it would be because they don’t stay in the same houses every year, so there’s always some sort of swap or adjustment.”

Ford said that she has made recent efforts to request for all campus maps to feature all Greek organizations on campus. “As of recently last week, I was communicating with someone who actually oversees the maps and actually just sent her a copy of the University’s map with all of NPHC, MGC, and Mu Sigma Upsilon Sorority, Inc. where their houses are on that map,” Ford said.

As of the date of this publication, the campus map featuring all of the Greek organizations have not yet been updated. Additionally, Rachel Schmidtke, the director of recruitment, confirmed via email that campus maps given out during campus tours are the same maps which highlight only IFC and Panhellenic organizations.

Another member of one of the NPHC organizations, senior Christian Rivera, said, “In terms of exposure, the minority organizations are definitely left in the shadows.”

Rivera, a member of Kappa Alpha Psi Fraternity Incorporated, said that when it comes to campus tours, “you often see the IFC or Panhellenic housing. But with NPHC and MGC, we’re normally placed on South Jackson which is behind the school.” Rivera said this lack of direct exposure in tours makes it even more difficult for minority organizations to gain exposure among potential and incoming students.

Current sophomore and member of Delta Upsilon Fraternity Phil Chung said that lack of alumni connections and minimal funding contribute to a cycle that places multicultural organizations at a disadvantage in terms of both housing and recruitment. Chung, who is also the Diversity and Inclusion chair for IFC at DePauw, spoke to other inequalities–– specifically racism––within Greek organizations on campus.

Ford said she has heard from different reports and concerns from students that there is an unwelcoming presence within certain Greek organizations. “That whether it is on purpose like it’s maliciously done or it’s just a product of that house culture, it’s unwelcoming to students of color,” Ford said.

“It gives two options,” said Hernandez, “One is a Google form that comes directly to me. It’s not anonymous.” The other form is also online, gives students the option of anonymity, and it goes to the Senior Advisor to the President for Diversity and Compliance Renee Madison.

Ford said, “These organizations really can provide spaces for students to find community, to find commonality, to find brotherhood, sisterhood, things that they may not be able to receive otherwise.”