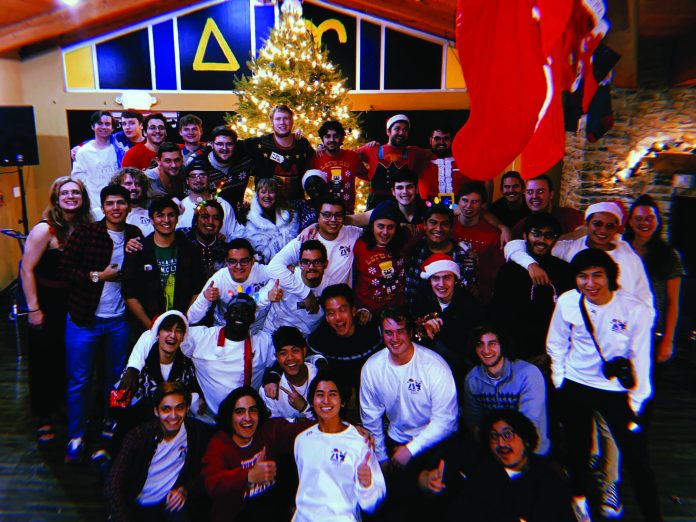 DePauw students are likely familiar with the student leaders that run the Greek chapters across campus, but many don’t know about the various dedicated staff members that work behind the scenes to keep these Greek houses up and running.

In addition to the chapter presidents and executive boards, many Greek chapters have house directors, cooks, and cleaning staff that work daily to assist fraternities and sororities. These men and women not only ensure the houses are operating smoothly, but enrich the lives of the chapter members they serve and enhance their overall Greek experience.

House directors of Greek organizations take on a variety of duties such as ensuring house safety, handling emergency situations, and making sure the needs of their members are being met.

Erica Fort, House Director for Pi Beta Phi, said a typical day at the house for her is “busy, busy, busy.” Fort started working for Pi Phi at the start of this school year, taking the job as she has prior experience working with college-aged youth and enjoys the space. In addition to working for Pi Phi, she works remotely as a Supervisor with the United States Department of Defense.

Senior Pi Phi member Lexie Manor said that Fort has been a huge help since becoming a part of the organization. “Our house has faced a lot of different issues this semester from the construction projects taking place and we were all really appreciative of Erica for always being on top of things and making sure everything was running smoothly,” Manor said.

Fort said her full schedule is lessened by the help of her great staff and welcoming members. “There's never a dull moment, she said. “I enjoy the challenge of adapting.”

Liz Davies, House Director or “house mom” for Delta Upsilon (DU), defines her role as a guide for the men of DU. Along with overseeing the house operations and helping to keep the men safe, Davies said she enjoys getting to know all the members and watching them grow up during their collegiate years. “It’s amazing to watch them walk in as sophomore guys and then watch them graduate as men,” Davies said.

Davies said she makes a point to try to have lunch with the men everyday, as seeing them daily is her favorite part of her job. “It’s just the little conversations, finding out where they're from or what their future plans are,” Davies said. “I couldn’t ask for a better group of guys.”

As she lives in the house with the men, Davies said she makes sure as new members come in they know “this house is built on respect.” But Davies said the DU men are always considerate.  “If they see me doing something, they always come by and say, Mom, can I help you?” Davies said.

Like House Directors, the cooks who work at Greek houses are dedicated to serving the members of their organization. Anita Atkins, head cook for Alpha Chi Omega (AXO), has been feeding the women of AXO for 40 years.

Working at several Greek houses before finding her home at AXO, Atkins said she “couldn’t imagine working anywhere else.” While she has the help of a sous chef and student waiters, she is the only full time employee in the kitchen, making the women three meals a day.

As Atkins has been a part of the house for 40 years, she’s met hundreds of women, even serving some of their children who’ve come through the house years later. Atkins said she keeps in touch with many of them via facebook or over text, and some come to see her at the house if they’re in town.

Some of the AXO women created an “Anita fan page” where they share recipes with one another. “The girls and the people I work with keep me going, Atkins said. “They make me want to come to work every day.”

Melissa Nauman, the night cook for Delta Tau Delta, agrees that the members of the house play a big role in why she enjoys her job. After working as a cook around campus for 10 years, a friend called her to tell her about the opening at Delta Tau Delta. “It was an opportunity of a lifetime that I couldn't pass up,” Nauman said.

Nauman said that cooking for a Greek house differs from other locations she’s worked for, such as Hoover, in things like menu planning, techniques, quantities and quality.  “Each day is a learning experience,” she said.

Nauman said she enjoys when the Delt men come to the kitchen to chat with her and that she is grateful for all the appreciation they show her for her work. “Melissa is the MVP of our house,” senior member Charlie Gruner said. “She genuinely cares about each member of the house and makes that known through all of her hard work every single day during the week.”