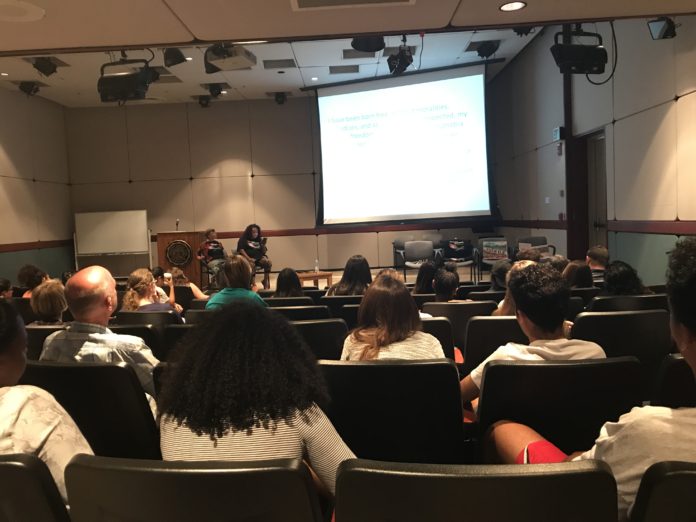 The students in attendance were captivated by the heart-wrenching testimony that speaker Karolina Lopez gave about her experiences in a detention center as a transgender woman of color.

Lopez,  the coordinator of the Letter Writing and Visitation Program for Mariposas Sin Fronteras, spoke to students in Watson Forum Wednesday afternoon.

Mariposas Sin Fronteras, an organization dedicated to help LGBTQIJ+ immigrants in detention. They were founded in December 24, 2011 and since then have helped many individuals and families get through the process of being liberated from jail.

When Lopez came out to her family as a transgender, her family was not very open and instead told her to change, but she refused to be someone she was not. Lopez decided to live with her sister for a while, but left right after her sister’s husband started to abuse her. “I have no tolerance for abuse,” Lopez said. She left Mexico and fled to the United States in search for a more accepting environment.

When Lopez moves to the United States, she fell in love and had a relationship with a man for two years. He then began abusing hard drugs, which he pushed her to do as well, forced her into prostitution, and beat her. Lopez left the relationship because she did not like how malnourished she had become. She was arrested shortly after and was sent back to Mexico.

Lopez came back to the United States shortly after because of the fear she had. Lopez said, “the fear of being in my country made me come back quickly as I could.” She then decided to turn her life around. Not long after, Lopez was arrested after calling in her stolen purse and was sent to prison. She spent 3 years in prison where she was harmed and mistreated for being transgender.

She was helped and released from prison with the help of the Florence Project whose mission statement is “to provide free legal and social services to detained adults and unaccompanied children facing immigration removal proceedings in Arizona,” according to their official website.

Mariposas Sin Fronteras was formed in response to Lopez’s experience. They wanted to help people in similar situations. The LGBTQ community are 3x more likely to suffer in prison.

Students believe that having speakers like Lopez come tell their stories on campus is a great thing, especially with everything going on in politics today. “With the whole DACA situation going on I felt like I just needed to be more informed about the situation of immigrants,” said sophomore Cecelia Slane, in response to why she went.

“It’s such an incredible learning opportunity the panelist talk was, it was a beautiful story,” commented Senior Erika Killion.

When asked about their thoughts on the talk, Senior Erika Killion thought that she was very encouraging. “Hearing her speak about the empathy and the love she has for this community despite everything she’s endured was inspiring,” she said. “I think that going to talks like this inspires a lot of optimism and a lot of hope in a climate that can be discouraging.”

Even though the price of bonds have gone up from the lowest then being 1,500 to the lowest now being 7,500, in the past six years, they have helped more than 25 people and have paid over a 100,000 in bonds to help those in incarceration. They raised money by selling food, GoFundMe and other online campaigns.

Even though their focus are people from the LGBTQIJ+ community, “Our priority is LGBTQ, but we don’t deny support to anyone,” said Lopez. And they hope to grow and help more in the future.