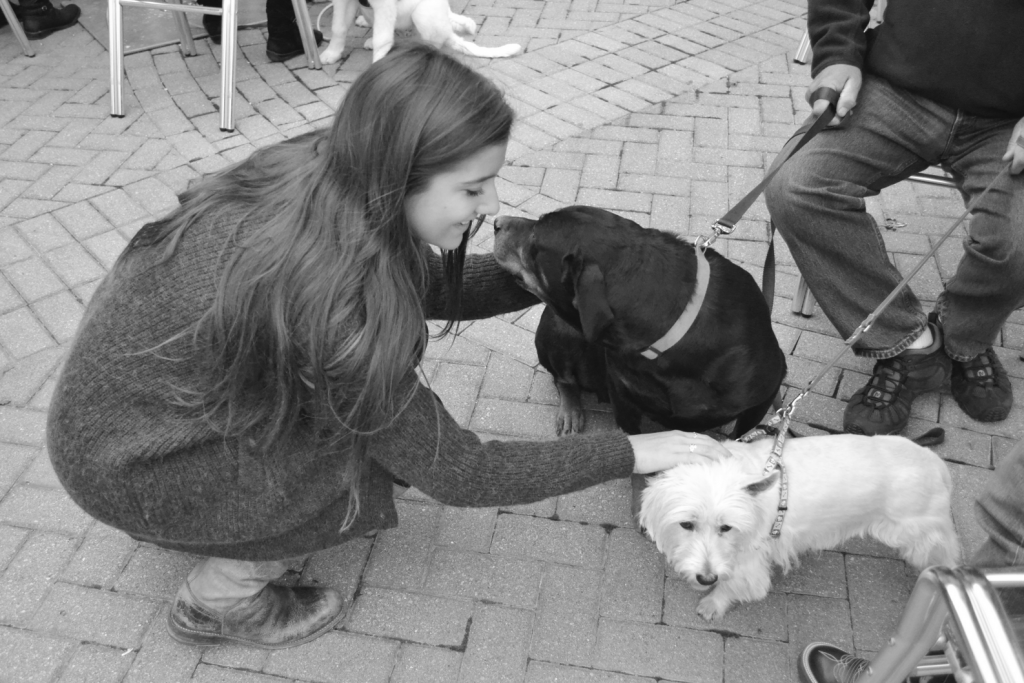 Madison Lozanoski '19, bends down to play with a dog during the Paws on the Patio event on Friday.
MCKENZIE BOYLE / THE DEPAUW

In light of its recent reopening after five years of being closed, The Inn at DePauw asked the Greencastle Humane Society to come out Oct. 2  to put on a "doggie dinner," fundraiser, where people could bring their furry friends out for some live music, socialization, a warm meal (for both people and dogs) and organic homemade treats. 10 percent of the earnings from all food sales and 100 percent of all treat sales went directly to the Greencastle Humane Society.

Greencastle residents Bruce and Linda Clute, brought their dog Gracie out for the evening.

"We're very glad they are having something like this and look forward to more of these," Bruce said, impressed with the turnout despite the cold, windy weather.

The Inn at DePauw helped plan and organize the event. The Inn says that both members of the DePauw community and residents of Greencastle are welcome to bring their dogs to the patio, where the event was held, at any time. The Inn hopes to sponsor similar events in the future, such as a Wine & Canvas event coming up that will also benefit the Humane Society.

"We wish there was more public places or events where people could take their dog," Linda said.

Sandy Grimes, president of the Putnam County Humane Society, said she was happy for the opportunity and turn of the event. A majority of the proceeds from events like this one go toward what she called "luxury items" for all the animals at the animal shelter, such as grooming supplies, floor mats and ground raisers so they don't have to sleep on the floor.

The Humane Society also makes it a point to donate $50,000 annually to the animal shelter so that they can keep it open and comfortable for all the animals. Due to the donations from the Doggie Dinner the animal shelter was able to hire their own vet, who just started on the day of the event.

The animal shelter also makes it a point to never euthanize for space, only in cases of severe aggression and poor health. Grimes said that the Humane Society and animal shelter are always looking for volunteers and are more than happy with student help.