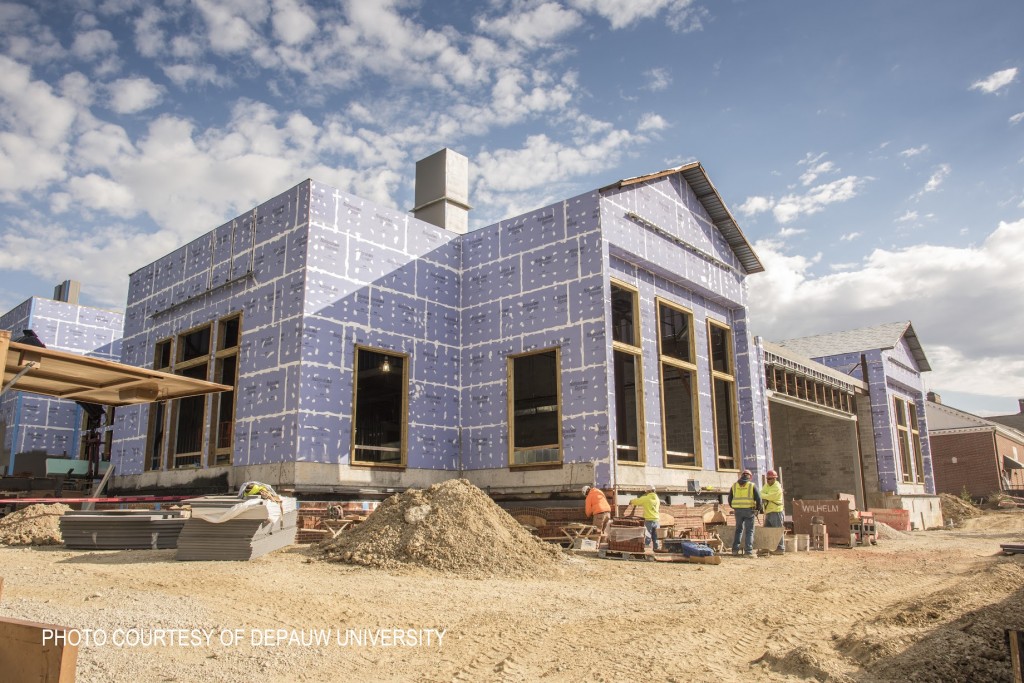 Close your eyes and picture this: you are sitting at a table with your friends in a beautiful dining hall, enjoying a plate of pasta that was cooked directly in front of you. It's wintertime, and to your right a fire is crackling in a huge stone fireplace. To your left there are three large windows through which you see snow gently falling upon the lawn of East College, the picturesque building standing in the distance.

This scenic moment may seem too good to be true, however next Oct. 31 when Hoover Hall finally opens its doors to the public, it will become a reality. The completion of Hoover Dining Hall, made possible largely by a gift from alumni Dave and Suzanne Hoover (both of ’67), will be an integral step in the university’s Campus Master Plan, which was put into effect in 2010.

The Hub, which was added onto the old Union Building around 1990, currently seats 330 students at maximum capacity. With over 1,000 DePauw students who must be accommodated daily, it was determined that the Hub wasn’t an adequate dining experience. Hoover Hall, with its main dining room, four specialty dining rooms, and mezzanine seating, will max out at around 778 people: more than twice as much as the Hub.

In August of 2014, the dining hall construction project began under the supervision of Warren Whitesell, Project Manager for Hoover Hall. With completion of the building approximated at the end of October, the total construction process will clock in at around two years. However, Brad Kelsheimer, Vice President of Finance and Administration, states that this time frame is ideal, and shorter than predicted.

“We reached a point about a month ago where we decided we could accelerate this construction,” said Kelsheimer. “Our plan called for an acceleration all along but we tend to play it conservatively and not assume we can accelerate. We are moving at a pace we think we can successfully.”

Whitesell confirmed that any type of acceleration possible would be gladly accepted, due to the fact that working through the winter conditions doesn’t give he and his team any leeway.

“We can’t predict weather, but we know that winter time will bring our worst weather," he said. "So if we can take advantage of alternatives, we can get ahead of that."

Although accelerating the process is definitely not frowned upon, Kelsheimer explained that this acceleration can only be successful if the Union Building kitchen and servery are removed in the summer of 2016. This frees up much needed space to allow for the construction of western portion of Stewart Plaza to commence.

A consequence of speeding up the construction process is that the Hub kitchen will no longer be there, meaning that the implementation of a transitional dining period will be necessary.

“We decided that the Hub isn’t a very satisfying place for students so it was a pretty easy decision for us to make the tradeoff between accelerating the schedule and transitional dining space,” Kelsheimer said.

This transitional dining experience will most likely be essential from August of 2016 until the end of October, when Hoover Hall officially opens. Student representatives have been working closely with Dorian Shager from the Department of Campus Life to ensure that this transition period will accommodate all students.

“Talking to students is the best way to get ideas on all of this,” Shager said. “We worked with student government and identified other students such as RAs, first year students, mentors and IFC and Panhellenic reps to ensure we have a variety of student perspective.”

Kelsheimer and Shager explained that whereas many schools going through a similar transition process would have to pop up a temporary dining bubble, DePauw has built-in food service facilities available. One of the proposed solutions to the lack of available dining locations once the Hub is removed is to cater Bon Appetit food services to students out of the Inn and Den. This solution offers a similar student capacity that DePauw has with the Hub to feed students.

“We are trying to think of some interesting programming options,” Kelsheimer said. “Even though the space, frankly, will probably be a little bit better than we have now, it will be different. It is a change.”

Once the temporary dining situation is over at the end of October, Kelsheimer explained that the Hub atrium space will be repurposed into student social study space and the Den will be renovated as per student input. This part of the transition lies in the hands of Shager and the DePauw student representatives. So far, Shager states that there have been many ideas for the Den’s transition that range from a first year space to a coffee house.

Shager believes that this method will be successful.

“We have a great process where we get this student feedback [from the representatives] and then they go out to their other groups, gather feedback from them, and bring it back to us,” he said.

Once the students, under Shager’s guidance, prioritize a list of their favorite programming options, Den and Hub renovations will begin in the spring of 2017. Following these renovations, Stewart Plaza, made possible by a gift from alumnus Jim G. Stewart of ’64, is expected to be completed mid-summer of 2017. This area will serve as a central gathering space for students, faculty, staff, and visitors.

Starting next week, Kelsheimer stated that Hoover Dining Hall will open its doors to students, faculty and staff walk-throughs.

“We will be starting an electronic ticketing program on Monday where students [and faculty/staff] can access tickets to come take a tour.”

Whitesell explains that from a safety standpoint, tours will be restricted to 15 people at a time and will be offered Monday and Thursday night at 4:30 p.m. but if there is a high demand more dates and times for tours will be added.

Although DePauw’s beautiful campus seems to be perpetually plagued by construction equipment, the payoff will greatly outweigh the tribulations. With features such as an energy efficient lighting and appliances, art displays, gender neutral bathrooms, four specialty dining rooms, and upgraded food platforms, Hoover Hall seems to be on the track towards nothing short of spectacular.