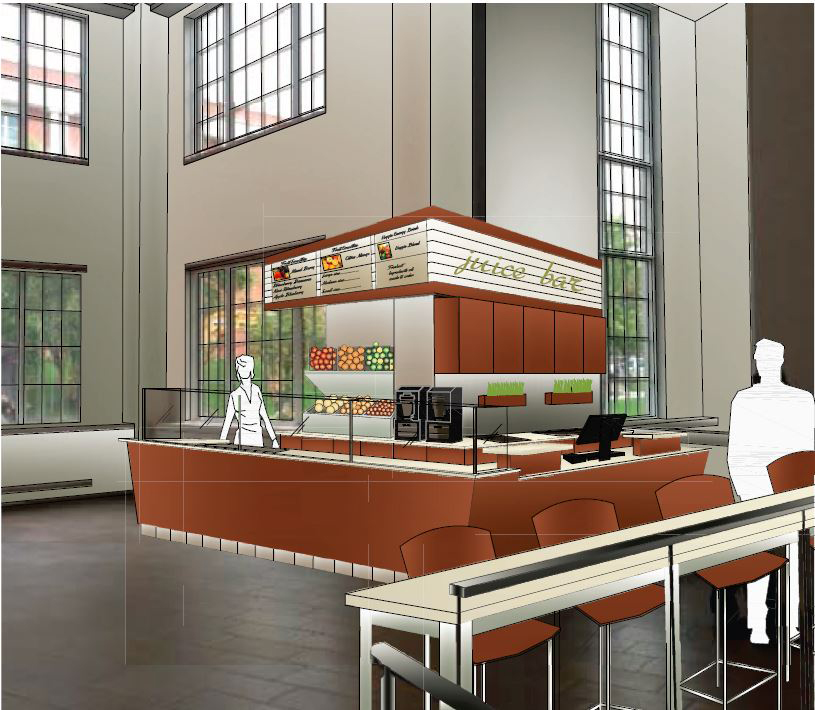 A rendering of Blend once construction is completed.
PHOTO COURTESY OF JASON ROSE

As spring stumbles its way onto campus and temperatures rise students begin to crave cold drinks. Those drinks won’t be coming from natural smoothie bar Blend, at least not for a few more weeks.

Due to red tape tying up construction, Blend’s opening day has been pushed back from April 1 to April 22.

“We had a few hiccups with the city requesting and requiring a few different thing that weren’t in the original drawing they approved,” said Jason Rose, General Manager of Bon Appetit. Bon Appetit will manage the new beverage station located in the Lilly Center lobby.

After Blend’s plans were originally approved, the Greencastle Building and Permitting department altered their original approval, requiring the smoothie bar to install a grease trap and indirect draining for its sink. This requirement could have set the project back even farther delaying Blend’s opening to the fall.

“I was nervous when the city came back and said we needed a grease trap because we wouldn’t have been able to open this semester if that had been the case,” said Rose.

After proving that a grease trap was unnecessary, construction on the bar began on April 7 and is set to conclude by April 17th.

“Starting the 20th, you’ll start to see some motion over there and it’ll start to come alive,” said Rose. Blend’s grand opening is planned for April 22.

Independent of construction, Blend has begun the hiring the process.

“We currently have 15 student employees and plan to hire about 5 more,” said senior Maggie Anderson who is working as an intern for Bon Appetit.

To fill the holes when no student workers are available, Blend will utilize Bon Appetit employees. All employees will get acquainted with their new employment in the next few days.

“Training begins this week where we will educate the blend team how to operate the [Point of Service] system, familiarize them with the recipes and begin to develop Blend's brand,” said Anderson. Blend plans on using this training period as a soft opening offering free samples to those passing by.

In the meantime, members of the DePauw community seem anxious to get their first drink. “I’ve had multiple people already ask me when it’s opening because they want a smoothie or they want a juice,” said Peacha. “I think the campus will really like it.”