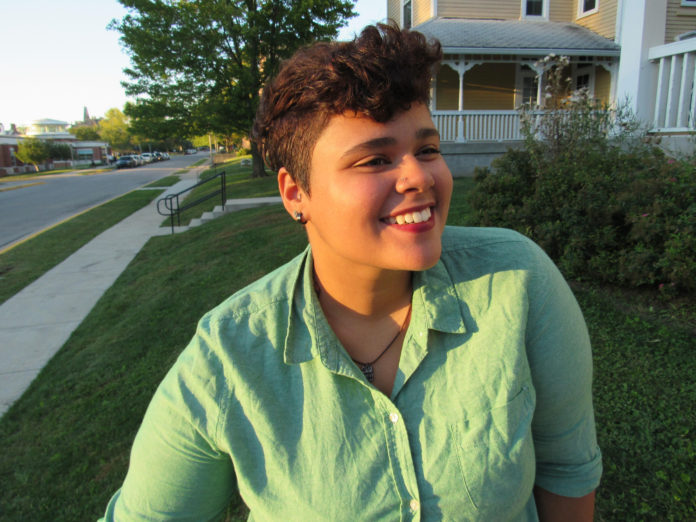 Junior Greisy Genao got tired of waiting for the day to send her work through the formal publishing process, so she decided to self-publish her book of poems titled “despierta..”

The title translates to awake in English. The book consists of 16 poems and discusses a range of topics, from political issues to Genao’s experience as a queer Latina poet.

TDP: What was your inspiration for “despierta.?”

GG: It’s hard to say because it was all over the place. For the most part it’s about a person, a girl who means a lot to me.

TDP: Why did you title your work “despierta.?”

GG: There are a couple of poems in here that have political undertones, and me being a poet who is Latina and queer is already beckoning to take up space in a field of art. [This field] typically doesn’t provide a space for people who look like me and who are living at the intersection of marginalized identities.

I feel like the book existing in itself is kind of “woke,” and we hear this term coming around a lot in our generation. We’re kind of described as people who have some type of understanding of the system, of identity, privilege, and power. Yet to me, it is not just being “woke” but just waking up and waking up not only in the poetic sense, but also waking up and realizing how my identities affect the way I maneuver the world.

GG: It is actually really easy. I used createspace.com and it is basically a subset of Amazon. They give you an ISBN code, which is a code that books have to identify them and then you start the process. First, you submit your book, and it could be a chapter book or a poetry book, and they also take films and music. Then you submit it under their format. After they review it in about a day, they send it back and tell you what is wrong with it or what is working. After that, when you’re ready, you proof it. Once it’s proofed, it’s available online.

TDP: Did you have any professors look over it?

GG: No, I am kind of hard-headed when it comes to editing. I do not even know how I feel about editing other people’s work because I always feel uneasy; I do not want to take away from the rawness and the context that you had in the moment you might have written it. Yeah, [“despierta.”] could get better, but is it quality versus showing your true emotion? I do not know, but I do edit my own work; I am not pretentious, but I am very picky about it.

TDP: Did you consciously make the decision to have both English and Spanish in your poems, or is it something that comes naturally?

GG: I am constantly torn between two different worlds and existing in two different identities–being American because I was raised here, but my whole family is from the Dominican Republic. Sometimes [the Spanish] is by accident, but sometimes it is intentional because to write in Spanish in a space that is for English speakers is to reclaim your identity and to reclaim your right to speak.

Something that I think about often is that when I go home and I tell my mom I am an English Writing major and she does not understand that. It is so hard to hear “oh, don’t write in Spanish,” but my own mother can’t read most of my work.

TDP: What was your favorite poem to write?

GG: One of my favorite ones was “Pride,” because I actually wrote this the day the marriage equality law was passed on June 26, 2015. I was excited, and I mean it was a bit rough at the house because although I’m out to my parents, it was a weird conversation to have. For me, “Pride,” stemmed from my parents not being together, yet, having the audacity to tell me that I cannot love another woman. The poem was my favorite to write because it was very self-reflective.

TDP: Would you work with a publishing house if you publish another book?

GG: Yeah, I would like to work with a publishing house just because there are some benefits; they do the advertising, and there is prestige in the name. However, I also like the self-publishing because it allows me to control my audience a bit more. I identify as a queer Latina poet–those words never come apart when I’m talking about myself–and that is intentional. The community I am writing for are people who look like me and are experiencing things I did, which are people of color, especially queer people of color.

TDP: How many copies have you sold?

GG: I have 14 purchases so far, which I think is a lot. Someone on campus sent me a picture saying “Look what I just got in the mail… I can’t wait to read it!” and I thought, “This is so surreal.”

–Interested readers can purchase “despierta.” online from CreateSpace or Amazon. —