The DePauw (TDP): You were a part of the Coming Out Monologues, so what did you perform?

Greisy Genao (GG): I performed poetry I wrote before coming out to my mother.  It’s called, “Mama I Love a Girl.”

TDP: How did your mom react?

GG: Well I came out about a year ago, the summer of 2013 I believe, and it was after I had done a very important program discovering myself as a feminist and a woman of color. My parents were in the room and somehow they were talking about the LGBT community in a negative way. I identify as bisexual and they were pissing me off. They were crying, and at first, it was just really bad, but with time they didn’t get over it but they are starting to realize that being like this isn’t changing any aspect of my reality.  It’s a huge part of my life, it’s who I am and I think they are starting to learn that.

TDP: What was it like to read it to an audience on a stage?

GG: Before me, Excel performed and it was amazing. They danced to “Leave Your Lover” by Sam Smith, so the crowd was in this kind of mood and I got a few gasps and snaps after my poem. It was nice. The crowd was very responsive and it was great to share it with them.

TDP: So do you think you’ll do it again in the future?

GG: I’ll definitely be doing it again, especially considering how small the LGBT community on campus is. It’s nice to show support for them, well for me too, I guess. I’m really involved with the community on campus and I’m actually hosting an event on Tuesday at the Women’s Center. It’s a queer people of color meeting from 5:30 to 6:30 p.m.

TDP: How was the attendance of the show this year?

GG: Well considering the amount of people at the Greek Gods and Goddesses competition, it was pretty packed. It was in the Peeler Auditorium and it was mostly filled up. So I’d say that’s pretty good attendance right there.

TDP: Did you get a chance to see any other people perform?

GG: Yeah I got to see the entire performance, there were four faculty performing and then the rest were students.

TDP: How many performances were there altogether?

TDP: Were there any performances that really stood out to you?

GG: There was one that was an interactive poem that the performer found onlin; it was kind of NSFW, but it was really funny. They would give us a phrase and the crowd would fill it in. It was really funny, with very funny things I probably shouldn’t say on here. There was some of the faculty that shared their coming out monologues, too. One was about how not to come out. It was really good to hear from someone who lived through the gay rights movement. That was really cool to me.

TDP: Is it an inclusive event for non LGBT-identifying people as well?

GG: I know a lot of people, straight and gay, would want to go to it. It is a very welcoming place and a place where people can go to learn. There were a few straight people there in the audience. 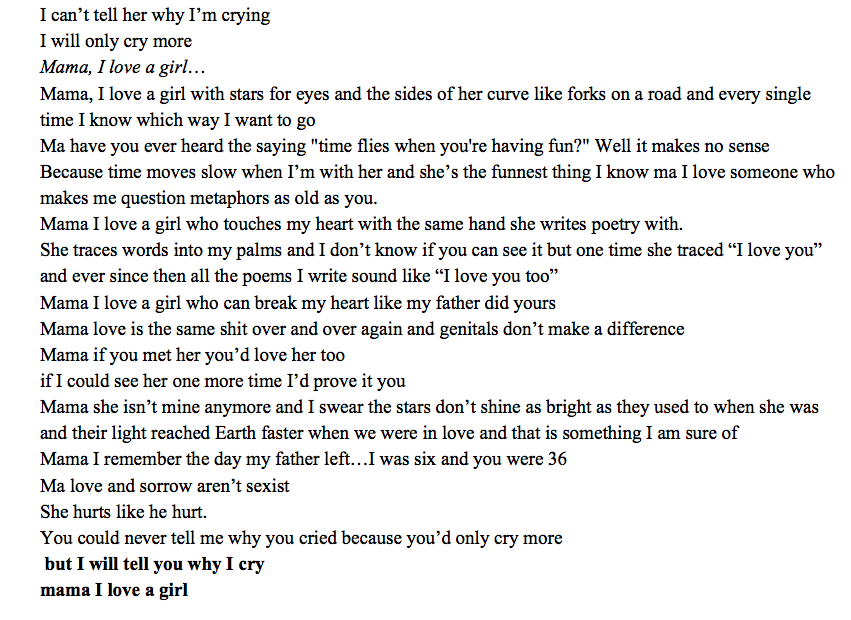 A poem by Greisy Genao.