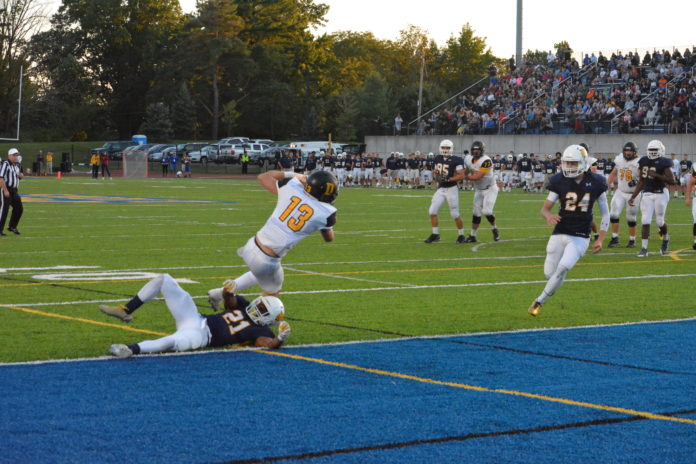 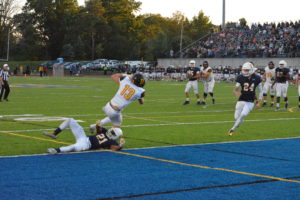 The Tigers escaped a close one on the road, edging out Ohio Wesleyan University 31-30. The win snaps a three-year losing streak to the Battling Bishops, placing the Tigers (4-0) atop the NCAC conference along with Wittenberg University and Wabash College.

The win, however, came at the expense of losing junior starting quarterback Matt Labus to a season-ending knee injury. After a 24-yard scramble late in the third quarter, Labus cut in the open field to dodge a defender when his knee gave out.

The Tigers will look to senior quarterback Jake Lasky and first-year Cam Haynes to fill the open position. Against Hiram College earlier in the season, the Tigers lost their first-year second string quarterback Chase Andries to a season-ending knee injury as well.

“In both situations, they were non-contact injuries. But that’s football, and injuries happen, so the next guy has to step up. Our scheme and philosophy are not going to change,” offensive coordinator Brett Dietz said.

Labus, who was coming off of an NCAC offensive player of the week award, was second in passing yards and touchdowns among quarterbacks in the conference.

“We are going to have to play with creativity. Jake Lasky and Cam Haynes will both be getting reps, with each one of them bringing a different element to this team. It is going to be a group effort,“ Dietz said.

The Tigers jumped out to an early 14-0 lead heading into the second quarter. However, the Battling Bishops scored 21 unanswered points to close out the half. Meanwhile, this was the first time all year the Tigers trailed their opponent going into halftime.

With just under three minutes into the third quarter, the Tigers’ defense forced a crucial three and out, giving the offense solid field position in Ohio Wesleyan’s territory. The offense capitalized with a five play, 40-yard drive, finished off by an 11-yard touchdown catch by junior running back Ramon Lopez to tie it up at 21 apiece.

“Our running backs are all great backs that each bring something unique to the group. We’ve got four to five guys that can really wear a defense out over four quarters,” junior running back Demarco Henry said.

Nearing the end of the third quarter, junior kicker Jake Tanner nailed a 30 yard field goal to retake the lead.

The lead was short lived as the back and forth action continued when Ohio Wesleyan’s Brian Perry tossed a 17-yard touchdown pass to AJ Jones to end the third quarter. The Battling Bishops took a 28-24 lead heading into the final quarter of play.

On this particular day, turnovers made all the difference.

The Tigers’ defense came into the game, only recording two turnovers through the first three games. They quadrupled that statistic by forcing three fumbles to go along with three interceptions. With 11 minutes left in the fourth quarter, junior linebacker Matt Crupi recovered a fumble on the Battling Bishops 39 yard line.

Arguably the biggest turnover of the day came when the team needed it most. With three minutes left in the game, and Ohio Wesleyan driving into DePauw territory, junior defensive back Brooks Hepp intercepted Perry to seal the game. It was one of two interceptions by Hepp on the day, with senior defensive back Ryan Price recording the other.

“Our players made big time plays in this game. It was a huge game and we wanted it more than the opposition,” Price said.

The Tigers look to build on their four-game winning streak heading into Old Gold weekend by taking on Oberlin College (2-2) this Saturday at Blackstock stadium.