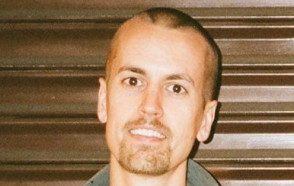 When two strangers (Julia Garner & Joseph Cross) and a robothead companion meet in the middle of nowhere, they create a mission to find a hidden lake on a waterless desert planet. This is the story of 2005 DePauw alumni Pete Ohs’ newest feature film “Everything Beautiful is Far Away” (2017).

“Everything Beautiful” is not Ohs’ first creative work, as it comes after a long line of documentary filmmaking, music video filming and editing, and overall video production since his time in middle school.

“In my head, I was never thinking ‘film’ or ‘film director,’ I was just thinking about videos,” Ohs said. “Even ‘Everything Beautiful’ is still like a big video to me.”

Ohs is an Ohio native who didn’t know he wanted to be a filmmaker one day. After coming to DePauw, he quickly declared his major in computer science. “I liked being on the computer...and internet was fresh,” said Ohs. “I could just sense the computer was an important thing in the world, in my world anyways.”

Although Ohs didn’t go into a computer science field, the skills from his major still contributed to his filmmaking career. “I haven’t done hard computer science coding [since DePauw], but I made my own websites because I was confident enough,” said Ohs. “Coding helped because it helped feature my work to then get more work...the liberal arts education helps in several ways, but it’s not always a direct line.”

On campus, Ohs was involved in as much video production as possible. As a member of the then new ITAP program, a producer for DePauw TV, and an avid video maker in his freetime, Ohs began crafting his first sizzle reel before graduating.

Director of the PCCM and Media Fellows Jonathan Nichols-Pethick noticed Ohs at DePauw not because of his computer science experience but because of his videography. “I always saw him as this guy who was in the PCCM a lot,” said Nichols-Pethick. “He was interested in film, music, and was in ITAP, but when I found out he was a computer science student that just struck me as ‘Oh, that is something else Pete can do.’”

From his “Student Short Film Show” segment created his sophomore year to his “Amateur Stand-up” show he produced two weeks before graduation, Ohs was constantly creating video content on campus.

He worked closely with Director of TV Larry Abed throughout his DePauw experience. “Pete had this very artistic creative side, but he was willing to do the medium, close-up ITAP interview, and do it well,” said Abed.

After his undergraduate experience at DePauw, he moved back to Ohio and worked at a production company, Blind Squirrels, that he had interned with as a student. “Every year we would make an hour long TV special, which comprised of 4-6 minute stories and I got really good at making those little videos,” said Ohs. “It sounds like standard stuff, but ultimately that is what every internet video is now...I can make these little videos with my eyes closed.”

After Blind Squirrels, Ohs followed Andrea Sisson to Iceland, where they lived for 10 months and eventually made the documentary “I Send You This Place” (2012). When describing his experience, Ohs said “It was just us and Iceland doing it all.”

Ohs moved back to Ohio following “I Send You This Place” and wrote the script for his feature film “Everything Beautiful is Far Away” in 2013. By 2015, Ohs had moved to Los Angeles, CA and began filming “Everything Beautiful” in southeast California. Premiering at the Los Angeles Film Festival in 2017, the film won the U.S. Fiction Cinematography Award, screened at various national and international film festivals and was acquired by The Orchard distributing company.

Ohs molded his artistic filmmaking side with his analytical coding skills from DePauw even in “Everything Beautiful.” Inspired by his trips to the Michigan dunes as a child and his time in Iceland as an adult, Ohs created an homage to his childhood vacation.

But, as an independent filmmaker, Ohs was limited in his production budget to get “Everything Beautiful” funded. “Think of it in computer science terms,” Ohs said. “You have these parameters for your potential solution, and I’m pretty good at setting up certain parameters and letting my creativity work within that.” His parameters for “Everything Beautiful” were a desert, two actors, a robot head, and his imagination.

Ohs is hosted by DePauw Film Studies and is screening his film “Everything Beautiful is Far Away” today, April 4th at 4:15 p.m. in the Peeler Auditorium. The event is open to the public.