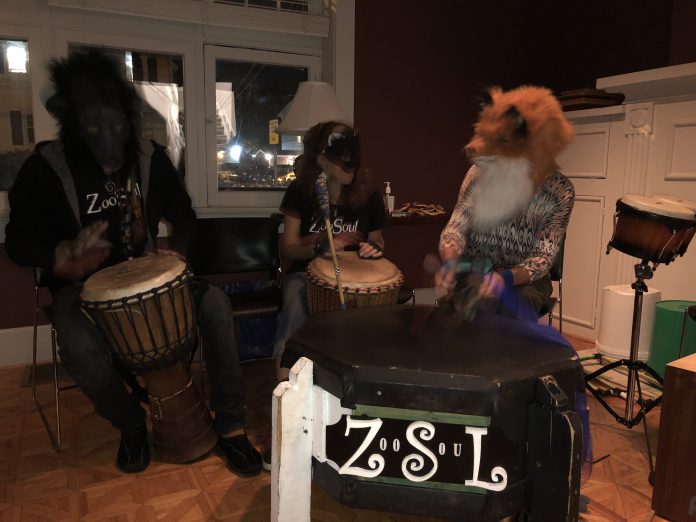 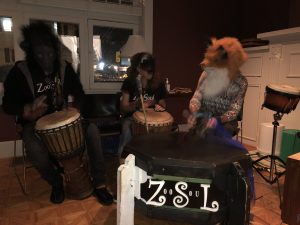 At 10 p.m. on Sunday, I beat on a bongo drum in a circle surrounded by a cat, a fox and a gorilla.

Hard to believe? What if I told you it was one of the most enlightening experiences I have ever had?

Last week, I attended ZooSouL Drum Circle at the DePauw Center for Spiritual Life, a new organization on campus this year. The purpose of the circle is to “create an open-hearted community by bringing diverse voices together into shared rhythm,” according to the group’s description online. Individuals of any age and drum experience gather to “promote healing, harmony, and just plain fun.” So far, six DePauw students have joined the circle which meets biweekly.

When I showed up at 9 p.m., I was greeted warmly by one of the group’s organizers, Shm. Shm has been playing the drums for 23 years and started participating in drum circles three years ago. For him, drum circles are a way to create magic in the world.

Recently, he went to a drum festival and wanted to bring back what he experienced to “make Greencastle whimsical.” Shm, Professor Beth Benedix, World Literature, and drummer Cliff Gemen have been playing together in ZooSouL for the past four years.

There is no definitive beginning to the drum circle. One person begins a rhythm and the other members follow with similar beats that go well together. There are no rules or sheet music. Everyone plays together and responds to each other’s creative rhythms. Also, there is no time limit to each set of rhythms. Some compilations lasted 3-4 minutes while others lasted much longer.

I was nervous to join in. The members all played with such confidence and I worried my rhythm would be “off.” However, as I watched all three of them, I noticed their heads were bowed, focused on the sounds. No one was judging me. I was the only one judging myself, questioning my own capabilities. And it wasn’t about me. It was about the drums connecting us all together as one.

I started tentatively at first, choosing a small handheld instrument. I wasn’t used to expressing myself through noise. My rhythms weren’t perfect, but no one seemed to mind or even notice. As the circle continued, I let go of caring whether or not my rhythms were perfect. Instead, I became focused on the repetition of the sounds around me. It was meditative and became a sort of trance.

Drums are among some of the world’s oldest instruments and the history of drum circles can be traced back thousands of years. In fact, drumming has a place in almost every ancient culture.

According to Gemen, ZooSouL is a combination of many drums traditions from Native American, Indian, African, and Shamanistic cultures.

For him, the drum circle is like “being part of the past.” He demonstrated how groups drums in tones, as many of the percussion instruments represent the earth’s elements. Low tones signify the earth and high tones are representative of air. Some drums can be utilized to sound like water. Cliff creates many of his own instruments such as the pow wow drum and bucket drums pictured.

Benedix said that the drum circle is the “best feeling ever,” both energizing and calming. She explained how the circle requires a lot of trust because it is not a competition, but a conversation aimed at keeping the rhythm going. When she drums, “time kind of goes away.”

ZooSouL also visits nursing homes around Putnam County under the name of Secret Healing. In the past, they have also played with elementary kids. Benedix said the only time she has experienced resistance in a drum circle is when playing with college students. “Younger kids are really receptive.” On the other hand, older kids have “more inhibitions,” making it harder for them to let go and engage in the drum circle.

Toward the end of the evening, Shm insisted that they all wear masks. According to Shm, wearing the masks, “allows you to be someone else” and “gets rid of the ego.” When everyone’s identity is concealed, differences between each other melt away and the drum becomes the center. As Shm said, “the drum doesn’t care what religion you are.”

I know as a college student that I care way too much about what other people think. Being part of ZooSouL for the evening allowed me to put aside by inhibitions and simply exist within the harmony of the music. As Gemen so perfectly put it, in the drum circle there is “no past, no future, no me. Just a big ‘we.’”