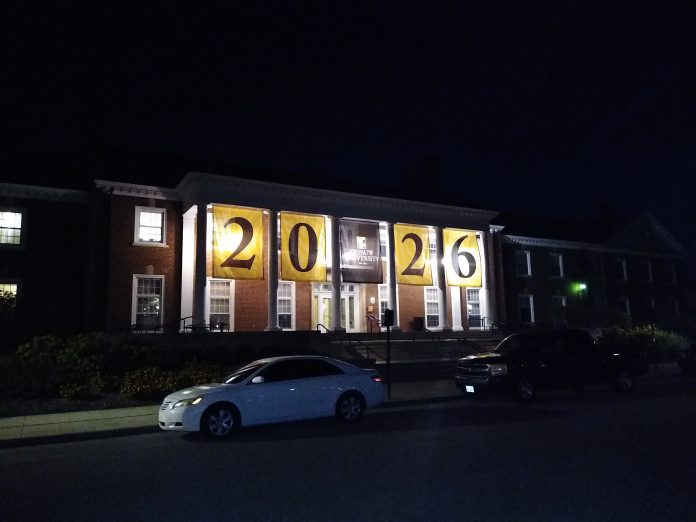 “We are coming off a global pandemic. This year, we really did transition a lot in regards to what we could do fully as a program,” he said.

2022 marks the return of the ‘Community Plunge’ program, in which first-year students volunteer in the Greencastle community. Many larger social events, indoor speeches, and celebrations were able to be hosted again too.

“This year's orientation was different and exciting,” Lopez said.

Each day of orientation focused on specific aspects of student life. August 20 was for welcome and transitions, while August 21 focused on a sense of belonging.

Lopez added, “This year was about trying to streamline based on themes.”

First-year mentors guided students through this new, theme-based orientation. The Class of 2026 was sorted into 40+ student mentor groups, composed of 10-15 students and one or two student mentors, based on their first-year seminar course. According to Lopez, mentor groups are “a way for students to start feeling at home and to create a sense of authenticity and comfort.” Students spent plenty of time with their first-year mentor groups during orientation week by going to activities together, eating meals together, checking in emotionally, and playing icebreaker games.

“The mentor group was a great thing,” first-year Amanda Kreiger said. “It was nice to not have to worry about ‘am I gonna sit alone at the lunchroom’ or ‘who’s gonna go with me to this required event?’”

Mentor groups also serve as a resource for students beyond orientation. Each mentor group shares a first-year seminar class together and starts an online group chat on the app, GroupMe, to stay connected. GroupMe also enables first-year students to confidentially contact their mentor for anything from locating a building to connecting with staff or  finding resources.

DePauw first-year mentors were carefully selected from multiple rounds of interviews and required to attend an intensive seven-day, 12 hours a day training for guiding new students.

Erik Perez, junior and first-year mentor, said, “We had talks from Mental Health and Wellness Center, Lilly Center, Women’s Center, and all those resources so we can pass that on to the Class of 2026.”

First-year mentors were trained to help introduce students to these resources.

“It’s nice to be a mentor because we know the ropes and we get to help other people transition,” Perez said.

First-year mentors also provided students with a more relatable student perspective about campus. First-year Maggie Galloway asked her mentor about the rigor of her honor scholar seminar, and her mentor's response made her feel more comfortable with the unknown workload.

“They were like, I’m not gonna lie to you. It’s not easy. We appreciated the fact that they were honest and we could ask real questions,” she said.

The orientation schedule took an intensive approach with several days of events which started at 8 a.m. and ended as late as 10 p.m. or midnight, and it quickly began to exhaust many students.

Galloway said, “It was overwhelming. Especially as a student with a disability, my body has not recovered from orientation.”

She suggested that orientation events should be spread out a little bit more to give students time to rest.

Kreiger echoed Galloway’s concerns, adding, “I would make the activities shorter, or at least give us breaks. It was just really long days for someone who’s getting adjusted to a new space.”

“It became overwhelming because there’a a lot being thrown at you. It was very tiring,” he said. “There was no break inbetween. You have to get up early in the morning for the next step of orientation.”

The first-year mentors, Lopez, and the transition team are eager to hear this type of feedback. First-year students will soon receive a survey that will allow them to give their feedback directly to Lopez. The orientation schedule will be adjusted for the Class of 2027.

“In the next month and a half, I will start reconfiguring and bringing back the transition team to come together and start thinking about what this upcoming orientation will look like,” Lopez said. “Every year I grab all the feedback and we will modify and adapt for the following year. The feedback that we get every year helps us enhance and improve the program.”