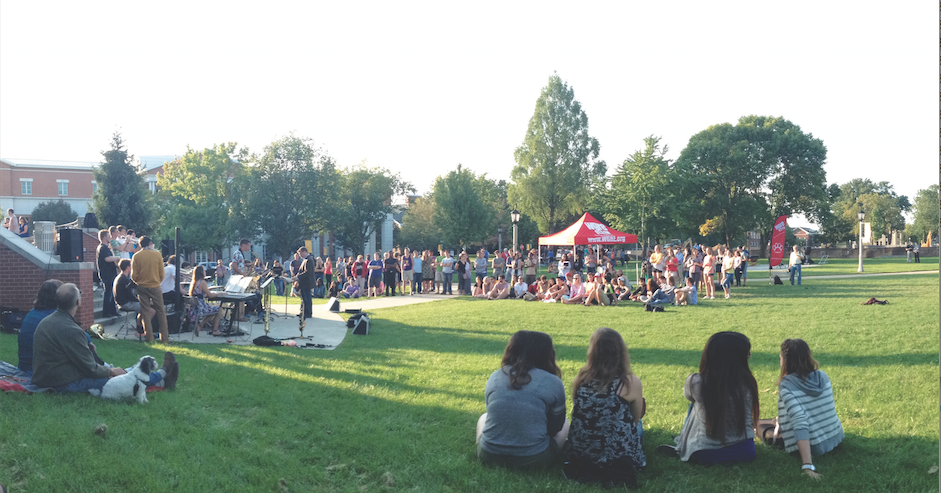 Voices, strings and woodwinds filled the air while the lawn was filled with students, professors and their families.

Professor Andrea Sununu was even found grading an essay as the Orchestra played a medley of music from Frozen.

The School of Music joined forces with DePauw Student Government for an evening of music and community in Bowman Park Friday night for what is known as DePauwPalooza, showcases the musical ensemble groups associated with th School of Music.

“It all started with a student government initiative four years ago, in an effort to build community between the CLA (College of Liberal Arts) and the School of Music,” Student Government President, Cody Watson, said.

Senior Kevin Smith, a section leader in concert band and baritone saxophonist in the University Jazz band, said that most groups had been preparing for two or three weeks prior to Friday’s event, and other groups performed selections from their fall concerts.

While, the student ensembles brought the music, this year Student Government’s role was mainly to advertise to CLA students and provide the pizza.  Students from WGRE and D3TV were also present to publicize this event.

The opportunity to create community over the different groups is something DePauw has been striving for over the years.

“It is a really great opportunity for the School of Music to share with the liberal arts school all the music we are working on,” sophomore Madeline Piscetta said.

It appeared that many students did jump at this opportunity as the attendance was dispersed among the whole student body of Greek-affiliated students, independents and first-years.

“What’s not to like with music and free pizza?” voice professor Caroline Smith said.

Professor Smith was thankful not only for the growing interest in the School of Music but also for the good weather which after the rain last year, made this event all the more of a success.

Students seemed to have felt the same, whether they came for the pizza, the pick up soccer and Frisbee games or to see their friends perform,  DePauwPalooza celebrated the talent the School of Music brings to the DePauw community.