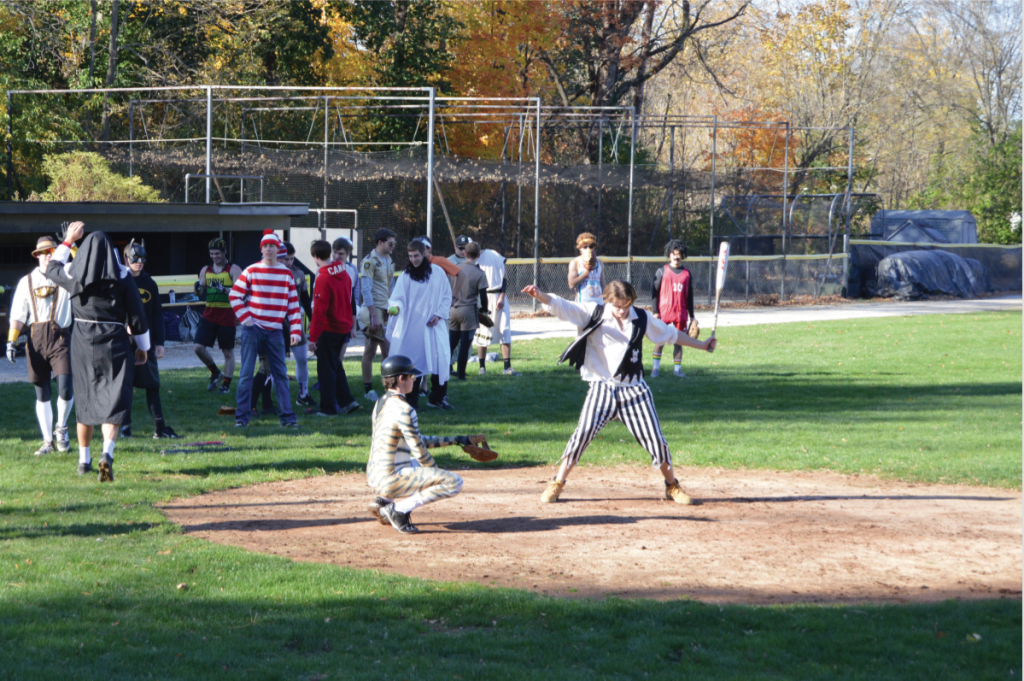 DePauw University’s baseball team got creative and made the most of Halloween Saturday and found a unique way to give back to the Greencastle community.

The Tigers went to Walker Field and played a scrimmage in their Halloween costumes. During the game, fans could dontate to the Greencastle Youth Baseball League.

“I think it’s important for our guys to recognize how much younger kids look up to them,” DePauw Head Coach Jake Martin said. “It was a great way to… give back to the community, but also for baseball… to keep promoting it in whatever way they can.”

For the most part, the players organzied the event.

“They asked for permission to use the field, and that was about as far as it went with me,” Martin said. “I was really proud of them. I think it was a good thing for the senior group to take initiative to do that.”

“I’ve had friends at other schools that have done Halloween practices in costumes, so I figured  it would be fun to play a slow pitch softball game in costumes,” Peck said. “I think it went well considering we threw it together last minute.”

Although the seniors planned the event, the entire team participated in the game.

“It was the most fun I have had in a while,” said first-year outfielder Clifford Chi, who played as Coffee Black from the movie “Semi-Pro." “The energy brought to the team was well worth it.”

Although DePauw's players had a good time, their main goal was helping the little league.

“We figured that having people watch us play in ridiculous costumes would be a good and fun way to help the Greencastle little league,” said first-year pitcher Jack Norton, who went as a D-League basketball player.

The rain on Friday afternoon forced organizers to pugh the game to Saturday. Unfortunately, the weather wasn’t much better on Saturday.

“We ended up with fewer fans in seats than we had hoped for,” said Misti Scott, treasurer and secretary for Greencastle Youth Baseball. “Next time around we’ll order sun and 70 degrees.”

Regardless of the turnout, people, including Tim West, president of Greencastle Little League, noticed the effort put forth by the players.

“This money will go towards our facilities like adding more dirt to our fields and fixing the pitchers’ mounds,” West said. “I would like to thank the DePauw baseball team for all that they did helping our organization.”

“The game was a wonderful gift from the DePauw community to our young, aspiring athletes,” Scott said. “The DePauw players are role models for the youth, and the costumes were an especially fun way to connect the younger players with the college team.”

The event hit home for many of the Tigers, since many of them began their baseball careers in little league.

“Baseball has given us so much in life,” Chi said. “When I was a little leaguer, I looked up to the older kids a ton, so hopefully they remember this and give back to the game when they are older.”

Although this was only the event’s first year, the baseball team looks to make the game a new DePauw tradition.

“It’s a good start,” Martin said. “I think if it becomes a yearly thing, they can draw a little bit more attention to it.”

With this event in the books, the Tigers will look to get to work on their offseason workouts. They have a North Coast Athletic Conference championship to defend when the season begins in the spring.