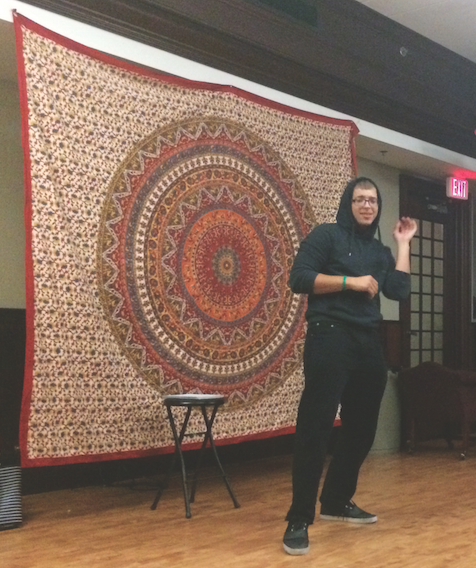 Student talent, an audience, soup and grilled cheese packed into Reese Hall on Friday, Sept. 19 for Soups and Sounds. DePauw University’s Union Board partnered with DePauw After Dark, an activity series that promotes alcohol-free social interaction, to put on the show.

“Usually union board does a DePauw After Dark co-sponsorship in the fall because we want to have an event for first years to come to which is alcohol free,” explained senior Courtney Cosby, co-president of union board. This year, they put on Soups and Sounds.

The event showcased student talent, including spoken word, singing, musical instruments and rapping. Senior Hunter Dyar, performed original poetry including one about “having one of those days.” Sophomore Onyi Awani played guitar singing covers of Paula Abdul’s “Straight Up” and Etta James’ “Something’s Got a Hold on Me,” while sophomore Jerald Parks, rapped originals like “Nap Town Hero.” Other acts included poetry from sophomore Howard Robinson and songs from sophomores Madeline Piscetta and Drew Casey.

“There’s so much talent in this room, I feel it,” said the MC, first-year Diamond McDonald, before calling upon the audience to come up and perform.

“There’s some incredible talent here,” said sophomore union board member Kate O’Brien. “I was blown away.”

Students had a few options to nibble on during the performances. Grilled cheese was provided from “Cheesin," junior and Pizza Dude Adam Folta’s newest venture. Students could get that night’s special, Havarti, pepper jack and thousand island, or classic cheddar. The Inn at DePauw also provided soup.

“He did such a great job. I’m in love with his specialty,” Cosby said, commenting on her grilled cheese from “Cheesin.”

The lobby of Reese was full for the event, with standing room only by the middle of the show.

Those in attendance also seemed pleased with the even clapping along to the music and snapping at their favorite moments in the poetry.

“I thought it was a cool experience because they involved food and student talents that you don’t normally see,” said sophomore Amanda Weber.